Next One TacticsView game page

Strategically fight hordes of enemies with only one class changing unit.
Submitted by BigBossErndog (@bigbosserndog) — 2 hours, 38 minutes before the deadline
Add to collection 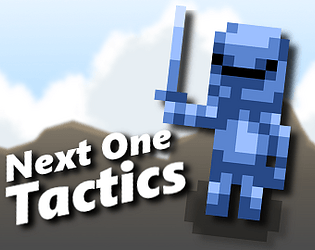 Next One Tactics's itch.io page

This is really cool! Been playing Fire Emblem recently and I like these turn based games, and I like the spin that you have one character that constantly changes class to keep the game fresh!

I like this. Maybe throw in some obstacles in the terrain for more variety ?

Such perfect idea, well realized ! Just missed a little reflexion music background but it's a tiny detail compared to the well-thinking things.

Very cool concept! And the aesthetic is cute too.

Original for me. A like the idea.
It just gets a little bit dragging on levels where the main tactic is to shoot and run. At that point, it wore off it's clothes made of tactics and puzzlers already.
I never got to the level with the wizard. I couldn't figure out the level with multiple archers.

But yeah, good stuff. Time killer while riding a bus or a train potential.

I'll see what I can do to vary it up more if I ever extended this outside the jam.

This game is symbol,but give me a lot of fun: )

This is a fantastic little game and I absolutely love the sound design. I'm astonished that something this well put together can be done in only 48 hours. :)

Oh, probably the best one on those where you can only have one mechanic at once, great job, it works really well even if I'm not a fan of the genre!

First of all I want to say I'm really impressed that you managed to make this within 48 hours, as someone who tried to make a tactics game from scratch this is an amazing feat. It's a cool mechanic too that fits right in with the theme. The main problem I feel is that it's not a tactics game that lets you do what you want to. It feels more like you're doing what the game wants you to do. And normally that's okay, but here it feels inorganic. I'd like to see this fleshed out to give the game more depth, and I'm still going to rate it high, but those are my thoughts for now.

I had to go for a more puzzle style approach because you don't have the flexibility of multiple units. The final level however is slightly more open ended with more options because there are so many enemies to choose from.  This would be the direction the game would go if I were to flesh it out :)

Perhaps I should change the genre to puzzle lol

Awesome job, like the advanced rock/paper/scissor idea and difficulty curve is well done!

Submitted
Only One Look Revised
LikeReply
BigBossErndogDeveloper1 year ago

at the first glance seemed as "rock paper scissors", but after introducing new classes it became more about "who you will kill first", "where you are going to move" and so on, and so on. Also, game is very smooth and beautiful, great job!

Such a smart idea for a strategy game, great job

Great idea and solid game play theres a lot of levels and the difficulty is just right.

This is great! To be successful you really have to consider what sort of defenses and offenses the character you will have one or two turns down the line will have. This adds a really interesting tactical layer to gameplay.  Well done!

Just wanted to share that at Stage 7 the game introduces the Archer, and the Mage is introduced even later on! These new units make you think more about positioning as well as the strengths and weaknesses of the original 3 units. I think it's really worth playing to these stages, the game is a lot more than the 3 classes you are originally given. There are 17 stages in total for all those wondering :)

Hey, great job on this game! It's a very smooth experience. Here's some more detailed feedback:

Design [3/5]: I like the idea of changing classes every time it's your turn. I think that idea is ripe with potential for an engaging tactical RPG. Having said that, there's not a lot of depth here. I wish that changing your class made more of a difference than simply changing which classes you are strong and weak to. Basically, the only decision I ever had to make while playing this game is "do I attack right now, or do I run away and wait until I get a better class for this situation?" Being forced to run away and wait for your class to change so you have an opportunity to attack was a really cool idea the first time it was presented,  but it outwore its welcome quickly. I wish that the different classes also had different movement options and different attack patterns, because I think that would have pumped the game up with more meaningful tactical decisions to make. I think this is a nice game, but I don't think it has enough variety to remain engaging for longer than a couple minutes.

Adherence to the Theme [4/5]: I think the claim that you have "only one unit" is debatable. I think you could just as easily argue that, on some levels, you have three units who all occupy the same space at the same time and take turns in combat. However, even if you look at it that way, I guess you could say that, though you have three units, they all occupy "only one" space on the board and share "only one" health bar. It works with the theme, but I'm not completely sold on the idea.

Originality [5/5]: I think this is the strongest selling point for your game. It's a very unique idea. I haven't played a lot of tactical RPG's in my day, but I've never seen one with this sort of twist before. Usually, tactical RPG's are about managing an army of units and their positioning, and this game puts a nice little twist on that concept. Nice job!

This game is ripe with potential, and I want to see you do more as a game developer. Overall, I just want there to be more variety: more movement options, more attack patterns, more enemy types, and different levels with walls and other obstacles, and more classes to play as. Please continue to make games. This is one of the most well-put-together submissions I've seen in the entire jam. The enemy AI is programmed extremely well, the graphics are smooth and easy on the eyes, the sound effects are nice, and the game is bug free as far as I can tell. You're obviously talented. Keep up the great work!

Hi, I think what you're looking for comes at Stage 7, that's when the Archer is introduced. And the Mage is introduced later. These units really change how the game is played and put a lot more focus on positioning than just weaknesses. Thank you for the in depth review :)

But yeah, how the theme fits is definitely a matter of perspective. For me, I made the game looking at the player as one unit, but they just change class every turn rather than several units in one.

Once I understood that each type had a counterpart, I started to think about strategy. Pushed me a bit out of my boundaries! The UI is very nice as well. Great game!

This is a pretty good game!  I like the art a lot, it is simple yet compelling.  Learning how much damage each class deals to and takes from every other class is a fun set of interactions to discover and feels so good to master.  Having said that, I would have liked something maybe a book, explaining all interactions that you have already discovered.  I found it hard to remember each interaction and frequently miscalculated or forgot if spear is good vs knight, or if knight beats spear etc.  Another issue I had was the game feeling like there was only ever one solution to each level.  There may have been multiple solutions, but it still felt like there was one.  Overall I like this game's design, I found it very clean and the gameplay was fun and engaging.  Excellent work!

Considering this is GMTK, I tried to go for a "show-don't-tell" design, so teach the player through level design, and doing this would save me time on creating the guide as well. For the most part I think I've succeeded in this but if I expanded on this game I would definitely include some kind of guide to help remind players. :)

On the topic of saving time, the most time consuming part was testing the levels. Making sure they were at the right difficulty, and they couldn't be cheesed through some lame unforeseen method. And if they taught the player something, it should definitely teaching that player exactly what needed to be taught. Unfortunately this meant most of the level were designed on a single solution and if any other solution happened to exist, then cool, otherwise the game would not have made the 48 hours. However the final stage (stage 17) is some level design I'd pursue if I ever expanded on the game, it's a bit more open ended than the rest, and provides a good level of difficulty (from my experience testing it).

Thanks again Best of luck with your submission too! :D

Wow. This is actually incredibly fun. The controls are smooth and the gameplay is great. I found myself spending way longer in this game than i was anticipating ahaha. How many stages did you end up making? I got up to stage 9 myself. I really liked when stage 7 mixed the game up even more right as I got the jist!