If You Had One Turn (To Seize Everything)View game page

One-Turn RPG with a twist.
Submitted by nyx — 1 hour, 59 minutes before the deadline
Add to collection 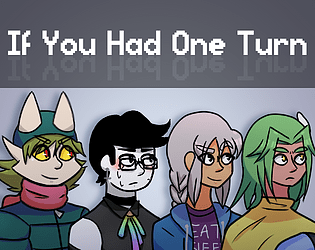 If You Had One Turn (To Seize Everything)'s itch.io page

Overall this was a fun game, my only gripe was not knowing what yours/enemy skills do, maybe a short description window could help with that. Nice job!

Very fun and interseting game. The one turn thing makes it really different of all other games of this genre (but in a good way). The music was extremely well done, the transitions between them and just the soundtracks themselves were amazing! Great job with this game!

Submitted
Lightless - Only One Light
LikeReply
CerosWareSubmitted1 year ago(+1)

This is a very fun concept! A faster restart and more exploration of this theme, and there might be a great game there. Check our game: https://itch.io/jam/gmtk-2019/rate/460207

Cool way to apply the theme to a RPG! The luck can totally destroy your run but since it's a short game it's not frustrating.

Wanted to try the game, but I keep getting this message.  -  "RGSS-RTP Standard Not Found"

Check the readme, there's an included exe that installs the rtp when you run it.

Thanks now that I was able to play it I can say it was decent. Not really show how I fully felt about the game, so I'm only left with saying it's decent.

I liked it! With more time to develop, I can see this really getting deep into some order of operations puzzle-esque battles that just feed into that little minmaxer that lives inside all of us.

The concept of only having one turn to finish the fight was neat. However I didn't really like how I have no idea what the enemy's abilities actually did. I felt that some of the enemy types were sort of trial and error and given the only 1 turn to figure it out I ended up just straight up dying. Overall the concept was cool but I felt the game was a bit repetitive from all the retries.

As a side note you should include some controls on the game page because I wasn't actually sure which button would back me out of a menu.

It's neat that this turns an RPG into a puzzle.

The concept is really neat. It sets a random stat to 1, and forces you to work around it, and you only get one turn each battle to win. The problem is that the game sort of gives you everything and expects you to do it. You only get one chance to see the opponent's stats and memorize them at the start of the battle. And without any knowledge of how the calculations work, the game does become trial and error until you've played the game plenty of times in order to grasp how much damage you would deal, and because you only get one turn before you auto die, you end up dying a lot. At least at the start.

After getting a grasp of the system, and all the moves available. The game does become pretty fun. Most of the strategy becomes hitting the right enemies with physical or magical moves correctly, once you figure this out the game is smooth sailing.

Stat changing moves and healing feels a little pointless because you only have one turn. All runs are almost the same, except when attack or magic attack is decreased as these stats are what matter the most.

I actually don't mind the unfair RNG deaths in this game, sometimes it wipes out one character, and you have to find a way to finish the battle without using them, which can actually be very interesting.

Beating the game is however very satisfying, especially with a nice credits ending. Not many jam games have a bit of a story like this, it was actually very refreshing to play through, I really enjoyed it!  Perhaps the game design aspect of it is weak with flaws in many areas, other than that it's very enjoyable, fits the theme, and is very original. It would be great to see this fleshed out (perhaps without the one turn limit as this is what's limiting the available strategies) after the jam is over :)

Submitted
Next One Tactics
LikeReply
SatizhSubmitted1 year ago(+1)

IYHOT is a wonderfully imaginitive game and it fits the theme better than a good few games I have played, but I feel like the game could've been better balanced. I felt I had no control over certain deaths, like dying to an attack that hits the entire party when the party had 1 HP.

Overal, a good game jam game, a great one after a few tweaks.

I'm actually about to publish a fix for it right now, one that addresses all of your concerns and more. Keep an eye out for it in the next 10 minutes!

Turns out uploads are temporarily disabled for the jam!  I'm okay with that, I'll post the full version later!

Dat Fiora shout out tho

To fix, go to Game.ini and change change line 5 from RTP1=Standard to RTP1=

After that I got another Error :( Am I doing something wrong?

Oh sorry I should have clarified for everyone, PLEASE READ THE README FIRST it tells you how to install the RTP and get everything you need. This is my bad for not clarifying earlier, please try again and see the game as it is.

I was really confused at first what the point of the game was with all of the assumed context in the dialog about the chair. Overall though the music and dialog/animations make for a fun atmosphere and a really quirky take on a RPG. I also was confused about having an AP bar with moves that take no AP. Also wasn't sure how I was suppose to make decisions about which moves to use when I don't know the enemies health nor the damage/effect that any move/skill might have. I guess that's just trial and error? Overall pretty fun and interesting. Good adherence to the theme too

Thank you for the kind words! Our team went wild with the story, and I'm glad lavendersiren managed to pull it all together in the end. And yeah we did try to make HP and stats visible (definitely could've done better there) but how you play can only be what you do. Thank you so much for playing our game.

Really fun! It kinda turns into a puzzle game. All the characters obviously have tons of personality and love put into them, and I could see this being expanded into a bigger project pretty easily. I will say I think something went wrong, because none of the skills actually cost any AP. Also, my antivirus was really paranoid of the game, so maybe warn about that in the game page? I had a lot of fun playing through this, though. Creative attacks, fun characters, challenging concept. Really nice!

Oh, skills aren't supposed to cost anything, that just wouldn't work in a game like this. Thank you for telling me about the antivirus, I'll be sure to put that warning right away, and thank you so much for playing our game!