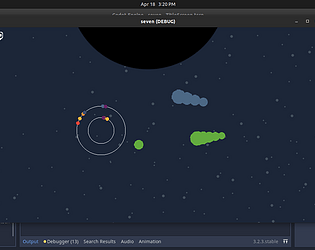 As others have already mentioned, the audio and art were lovely but the controls were pretty difficult to use.

Submitted
The Seven Trials of Chronos
LikeReply
mikouajiSubmitted153 days ago

Looks pretty nice, but I couldnt get my head around what should I do, unfortunately the "how to play" section wasnt helpful :(

Interesting concept. Unfortunately I got highscore of around 600 before understanding how things for, and a grand total of zero when I read the "how to play" section. No idea how that happened. Also when I went to the "how to play" section I couldn't figure out how to go back to the menu, so I just hit refresh. It would be nice to put a button or a label about how to go back.

I must be stupid. I could not figure out what this game was about. Maybe add some text on your page to explain it?

In concept the game seems interesting and the idea behind the setting could be cool.  The visuals and audio are overall pretty well done and help add to the experience.  As for the actual gameplay though.. the controls are... weird.  It almost feels like it's trying to be a mobile game sorta control where you click and drag to aim your player etc. but... it doesn't pause anything and continually gives velocity while the mouse is nearby?  Which leads to a lot of out of control space worms and leaving the screen.  In more detail:

Thanks so much for this! A lot of great ideas in here. I didn't have much time to fine tune everything and in the end I wasn't super happy with a lot of hte things you've pointed out in here. When I get a chance to do some touchups I'll definitely be referring to this comment for guidance. Thanks!

I took some time to understand :) but the music was relaxing so it wasn't too frustrating. Thansk for the game!

Cool little game. I got 451. The control scheme takes some getting used to but was fun once I got the hang of it. Can be hard to slow down your worms though and I shot a few of them off screen or into the black hole.

A tutorial level where you only have to deal with one worm and a few food all on the same screen might help players get used to it faster.

Submitted
The Seven Trials of Chronos
LikeReply
ShovelSubmitted155 days ago

Really interesting mechanic, and pretty fun to get the hang of!
Nice work!

Pretty challenging to control but this feels like one of the more unique and interesting concepts I've seen so far!  Couldn't get vary far because I kept accidentally launching the snakes across the screen!

really interesting control, but should be polished

I liked the concept and simple graphics of the game. My high score is 426.

The controls were very original but also abit frustrating. On the web build you have to be very precise with the mouse. I think you can fix that by letting the player enter fullscreen mode(there is a checkbox at the web upload thing)

Interesting idea and mechanics for the game!

I didn't understand the point of shooting?

Hey! Sorry if I didn't make this obvious. The black hole gets bigger as you play, shooting it will cause it to shrink.

I enjoyed the music.  Nice use of physics.  Quite a different take on a space simulator adventure game. A fun entry for sure.