Snail-like runner with RPG mechanics
Submitted by idlebum — 2 hours, 49 minutes before the deadline
Add to collection 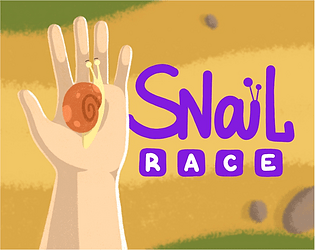 Wildcards Used
Good things come to those who wait

Game Description
A lone snail dragged out her miserable existence in this rapid world, until a young adventurer picked her up with his warm hands and gave her a goal...

Cute and fun! I only wish it could have been longer. And that the full bar boost was a little more intuitive (I think my timing was off or something).

Thanks for your feedback! I will think how to improve boost. Right now it adds like 25% of full energy, so you need to eat more food until there is an indication that bar is full (sound and lightning icon scale up). Anyways, there's still room for improvement, so thanks for trying this out! :-)

Well that was just amazing and adorable. Loved the art style and the general concept.

What a fun creative game.  I really enjoyed the art and story.  Was there more uses of 7 then just the name of the snail that maybe I just missed?

Submitted
The Seven Trials of Chronos
LikeReply
idlebumDeveloper97 days ago

Thanks a lot for playing! Actually, snail numbers are just for distraction and true reference is 7 sins:

Reference is not explicit, as we did not want the emphasis on that. We wanted the game to be self-sufficient, as if there were no theme declared at all.

One of my favorite entries for sure ! I loved the graphics. And the humour. It also was very surprising which made me keep playing even when it was less fun (one tunnel is really long).

If I was too nitpick a bit: It would have added so much more tension if the rabbit was moving ^^

Thanks for your feedback! We had to sacrifice rabbit mechanics to have more time for other aspects, but we are definitely going to make the rabbit more robust after Jam's finished :)

Oh my goodness, I am in LOVE with this game. Amazing, amazing job. Easy to understand mechanics, great subversion, awesome story, perfectly adorable art. Just wow.
I loved everything about this game.

Thank you so much! Best feeling when you see your creation evokes such emotions :-)

I really enjoyed this one. Starts off like a little race game, turns into a story and a little adventure. Really liked the game, artwork and music - great job!

Thank you so much! Surge of motivation :D

Excellent work! The scene at the end was great! Great art.

Thanks a lot! We love games and memes, why not making a meme game :-)

I thought it was great little experience! The audio and visuals in particular were really good. One piece of feedback I have is that it didn't see like the rabbit was ever getting close so I didn't feel like the stakes were very high in that scene.

Submitted
The Seven Trials of Chronos
LikeReply
idlebumDeveloper98 days ago

Indeed, rabbit is on parallax layer and its position depends on player's, so it will never reach you. It was made as an addition to our overall absurd theme + we did not have time to implement killing and respawning system, sorry for that :D
Thanks for playing and feedback!

What a game, everthing about it is great, but Im sad I couldn't win the race. Good submssion, congrats!!

We can think the idea is not to win but to quit snail race :D
Thanks for playing!

Amazing game, the visuals are so good and everything feels so polished, great work!

Thank you so much, that's motivating :D

What a cool experience, really exceeded my expectations. The art is really beautiful and has a nice background story, everything works really well, the music, the ambiance, the controls. Congratulations!!

Thanks a lot, we are happy to bring joy to people :)

Can't wait to see the next adventure of our little snail :)

Cheers! Looks like it'll have to go through myriad of challenges before crossing the finish line :D

What an awesome game, definitely subverted my expectations. And the ending! :)

Would love to see more of it!

Thanks! We aimed to make it a little bit ludicrous just to take rest from seriousness :D

Love this! The graphics are great, everything is super polished, and I can see how the mechanics would be good for a longer game.

Love this! The graphics are great, everything is super polished, and I can see how the mechanics would be good for a longer game.

And i though i was just going to play a racing game... You can bet you surprised me :) . And lovely art!

Thanks a lot! We are happy to have surprised you :-)

Thanks, we ourselves had a lot of fun while creating it :D

This is really fun. Love those fast snails! Great job.