Submitted by avatarer — 4 hours, 1 minute before the deadline
Add to collection 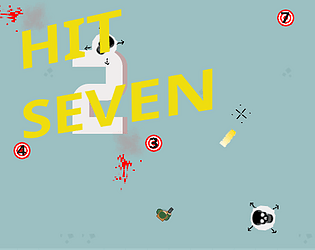 Very fun game! The controls are a bit clunky. But that didn't hold me back from having a fun gameplay! Good job.

Very nice game! I enjoy a good top down shooter, so this was a lot of fun!
I have only two pieces of feedback:
1) It feels strange that the cursor moves with the player and then, like, resets when you move the cursor again. The cursor should definitely stay where it is, rather than being relative to the player. Potentially just an issue with the cursor node being parented to the player rather than being a sibling of the player, with a game manager as a shared parent, but I'd have to look into your code architecture to know for sure, heh.
2) The recharging time felt waaay too long. Finishing one of those idle sections probably should have refilled the entire clip, or only taken like a fifth of the time to get a bullet back. The amount of time I had to spend idling really killed the momentum and flow of the game.

But overall I really had a fun time playing your game, it was very enjoyable. Great work!

top down shooter is not my type of games ,but it was fun

Fun game, I like the bouncing mechanics. The fact that the cursor moved with the player was a bit annoying though, I was very confused at first about why aiming felt so weird.

The Lore was great. You managed to explain the lack of polish with some evil being. It was to hard for me. The pointer was attached to the player and it was mildly infuriating. Really cool game.

Submitted
They are lost, You must help them.
LikeReply
PaspartoutSubmitted1 year ago

This is a really good game! I liked how the bullets reflect from the walls which enabled you to do some cool trickshots.

I found the penalty of losing a level a bit too harsh though. Could only play the first three levels before giving up. I think adding maybe 2 or 3 lives to the player would have smoothed the difficulty curve a bit.

Hi avatarer, I liked the arena. Keeping track of all the movement is a good challenge. Dunno if this is a deliberate mechanic, but when I move with WASD, the crosshairs move with me, throwing off my aim with the mouse. Otherwise, good stuff.

Hi, thanks for playing!. That is interesting. I played so much 'Nuclear Throne' (which also moves crosshair with the player) that i though it was the normal behavior. Never realized it could be confusing for other players.