A dice game in a dark cave with a mysterious figure... What could go wrong?
Submitted by Micreps (@MicReps) — 2 hours, 22 minutes before the deadline
Add to collection 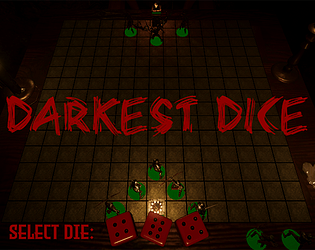 How does your game fit the theme?
It is a dice battle game!

A good turn based strategy game. Enough content for a jam but I hope you keep developing this. Lots of potential sitting here. It could be much more fun with more units in future. I just love it. Good work sir o7

I didn't beat all levels but I had a lot of fun playing. It took me a bit to realise the tower is also attackable even though you mention that. An overall HP of the tower would've made it a bit easier for players to grasp that. I like the way you communicate health of each piece, so one like that for the tower would've been great.

Being able to add more pieces onto the board when I rolled a 6 was great but I was hoping the AI would do the same.

Nice strategy game with great atmosphere! I beat all the levels and really enjoyed it.

Actually beat all the levels? Congrats, that is awesome, thanks! I wasn't sure it was possible!

The presentation with the table and the candles is so immersive!
I had a really frustrating experience on second board due to constant poor results. I think the game is too much based on chance rather than strategy.

Here are some non-intuitive things:
- There is no way to distinguish ally units from enemy units
- It's easy to missclick (or have weird raycasting) and self-heal or move behind an enemy instead of attacking the enemy like we wanted (and losing precious action points)

Thanks for the feedback! I've actually already fixed both the misclicking issue and distinguishing enemy vs player units for a post jam version, some things are just gonna be a little rough for a 48 hour Jam version.

Working on making things a little more strategic and less luck based as well.

Cool game! The idea of controlling pieces on a board and having the ability to heal, attack, or move them with a single die is nifty! The game was challenging, but fair (though I swear the AI rolled better than me...). And the AI seemed to be pretty smart on how it chose its moves, which I'm sure was fun to program.

My only complaints about the game was that it was a little slow for my tastes, if there was a way to do 2x animation speed, or just queue up your actions and then have them all execute at once, that would be better for follow up play throughs. Though I believe that should be an option for the player to select, not a hard change.

If you end up developing it more, adding other characters (e.g., a mage), and some way for the player to have more control of their die rolls (pure random can suck in XCOM like games), (e.g., a relic that gives you reroll option of some sort), then let me know and I'll happily play test again!

game lives up to the title haha but the overall atmosphere adds to the immersion like i'm playing a tabletop game (kinda like inscryption). the visual indicator of hp was neat. the mechanics were simple but still requires some strategy.  there are times though when i would click on the enemy to attack but the unit moves instead. but other than that excellent job!

Really grat minifigure board battle game.
Visually appealing with the dark dusky them.
simple but working mechanics.
I really liked it <3

Cool game, the choice of what to use your 3 dice for adds a lot of strategy that some other games with similar mechanics lack. The art and vibe is nice, however it is a bit too dark (I seen in your stream that your making it lighter though). Great start for a game, seems like it is a concept that could have a lot of options for expansion!

Very atmospheric game, with the cinematic music soft lighting and well chosen sound effects. The game-play was fun but challenging at times,  this is due to the dice being unkind. A good looking game that can be expanded upon even more to add more combat types and events. Oh and I do like the board reset animation!

The Gameplay mechanics are a bit simple. but it works great and alow for some good strategy.

I enjoyed playing it. Great work!

Really cool game! I like the easthetic. Reminds me a lot of inscription. It looks really nice :)

The mechanic is also pretty cool. I like how you have the turn based tactics where the dice give just enough randomness to be exciting, but since you have three and you can perform 3 actions with them, it also gives a lot of depth. I think I prefer this over the classic 20 units per team. just lessen the units and give them more actions.

Submitted
You're the Dice, Ruin the Game
LikeReply
GalloPintoGamesSubmitted196 days ago(+1)

Super cool game! best looking! I think is at least in part inspired by Incryption?

Enjoyed the strategy aspect and waiting to get a high number, really enjoyable, great use of the theme.

A couple of comments: I think that the game is just too dark, I understand the mood with the candles and everything but still I think is too dark.

I also think that the enemies should have a different color life bars so is easier to differentiate from player units.

overall great job man this feels like a fleshed out game

Definitely inspired by Inscryption! I had thought of letting the player get up from the table and walk around but that was a bit overscoped for 48 hours. Will likely have some of that in a future version (along with upgrades for units and kind of collectable units and whatnot).

Game is definitely too dark in the jam version. I've already lightened it up since. I kind of changed the lighting last minute before jam submission to make it darker and really just went a little overboard with it.

Working on totally updated health bars for both player units and enemies, should be much improved in next version.

And as far as mis-clicking, yeah, that's something I need to solve. I'm thinking some kind of indicator to show exactly what you are going to click when you mouse-over. I already added tooltips that show unit stats which would help with that, but also going to add like a color change on a tile when you are set to move there and things like that.

Thanks for the great feedback!

Simple and enjoyable strategy game with great aesthetic though I think it was a bit hard to distinguish the type of the game pieces.

Perfect atmosphere, a bit dark, but it fits the theme very well.. I would love to see that project in multiplayer however  AI is actually good!

Once thing I would suggest, is UI improvements instead of circle as health, number would help, adding icon to show what are you (archer-knight-soldier or whatever) would help too.

Thanks! Already working on UI improvements(changing the health bar and added tooltips to show stats and knight/archer). Thanks for the suggestions and thanks for playing!

Loved the choice of aesthetic.

The gameplay was also easy to pick up and get into. The game overall felt good to play with good feedback/polish. The rng was a bit of a pain though.

Still, great job for the jam!

A great tactical role-playing game! I struggled with the damage and health numbers in the game during my gameplay, but after I got the hang of them, it was a great experience to advance in the game. I wish the game was giving out more parameters to strategize with, but for a game jam, this is pretty enough!

As a big fan of tactical RPGs (or maybe SRPG in Japanese words? I am more familiar to this term so let me stick on SRPG), this is really a cool game for me!

It’s impressive that you have done all of this art, combat etc. in 48hrs! A while ago I tried to make an SRPG game but I was annoyed by the complicated logic / UI stuffs forever. I never thought I can play such a well made one in a 48h jam!

The idea is solid and fun to play with. It kinda brings the RNG result (somehow important risk in those games) to somewhere before your moves, so you need to change your strategy based on that, which is really fun. I can see how interesting it can be if more mechanics are added! (And a more detailed UI showing more stats xD

Nice implementation of the theme. The art and music really complement each other, creating this great environment. The game is called Darkest Dice, (inside a dark cave) for a reason, but I think maybe the game was way too dark for me, but still a solid game. Good job!

Cool game! Pretty luck based, but it's very easy to understand and strategize with. I could see this being a classic board game kinda like Sorry or Risk. Also, very polished UI!