The fate of the battle hang on a good roll of dice
Submitted by Szym — 9 hours, 17 minutes before the deadline
Add to collection 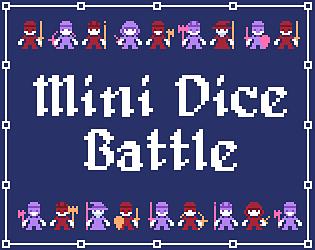 How does your game fit the theme?
Your available actions are defined by dices rolls

This is a really good strategy game and a good use of the theme. I really like how the game looked. The game had an almost Classic Game Boy Color aesthetic,. The sprites were each very unique, and each clear in their function,  so just by looking at them, i knew what they did. I also really appreciated that you had a fully fleshed out audio experience, it really improved the game, and I know that that can be hard to work on during the jam constraints when so many other things require your attention, so really good work on that.'

I think gameplay wise what you chose to do worked really well within the theme, and you could have just left it at put the die on the soldiers to move them or make them attack, but you didn't you improved and expanded upon it in really interesting ways by making troops use die in different ways and I really liked that. You also had this cool shrinking field gameplay choice, which I think was a good design choice because it forced the player to engage the enemy and to ensure early on that they had the superior force. I actually think that because of this shrinking field dynamic, you promoted some cool strategies about which units to by first. I  have no feedback on the gameplay, it just worked really well. However, I do think I may have experienced a small bug. After the game said I won, new enemies were spawned. If what I have described is a bug, it is not a big deal as it did not impact the playing experience, just thought you should know.

Great work on this game, and thank you for sharing. It is a very fun game with lots of content.

Thank you very much !

Glad you enjoyed it and noticed all the little gameplay element & strategies that goes with the shrinking field :)

Thank you for the detailed feedback & the bug report :) (I noticed it a few days ago and it will be adressed in the post-jam update)

yay i cant wait to play that update

Just published the post-jam update If you're interested. :)
Devlog here

fantastic! i look forward to checking it out later on this evening!

Thanks for submitting your game to the stream, here's the interview;

Thanks for the interview ! It was very nice :)

Love the gameplay !! It was nice and simple ! the concept was super original and fit the theme really well. Great work!! :D

Amazing game! Very intuitive and simple, but requires a lot of thinking! I ended up playing for a really long time without even realizing it! Amazing music and art, and the balance is really good as well. Nice job!

That's very nice to read ! Thanks for playing :)

Its fantastic to see a tactics style game making its way into the jam! The art style is lovely, and the music fits really well. The game itself is really well thought out - wish I had a coop buddy to play against!

Submitted
A Game with Dice
LikeReply
SzymDeveloper74 days ago

Thanks ! It was nice to watch you play it :)

I really enjoy these kind of games, loved all the different pieces and it even has a multiplayer mode! It really looks like it was made with love. Great job!

Thank you very much ! Glad you liked it <3

Neat little chess battler with roll mechanics. Was a bit hard at first to understand what each dude does, but once the mechanics sink it its really cool to play. I beat my sons ass in the 2 player mode. Which i really liked. So, definitely a good job.

Thank you very much !
It was nice to watch you two play :)

The pleasure was definitely on my side. thanks for sharing this with us and the world.

Almost like dice chess! Thanks for letting me play your game! Played at https://twitch.tv/hedgein<3

Very original game and fun to play once you get it. It might need a tutorial because there's a lot of new original mechanics so walking player through them slowly would make it much easier to understand. With jam limitations though, that's still an amazingly done game! Looks and sounds so good too!

Thanks for coming to my stream! Here's a recording in case you'd like to refer to it

Thank you very much !
It was nice to watch you play it :)

Simple at first glance, but super well designed and clearly very thought out. A great variety of characters but consistent rules for each made it easy to learn. The balance between movement and attacks for dice rolls was so well done. Great job!

Awesome game and concept once you learn it! Solid jam entry all around.

Great UI that explained the game well to the extent that I didn't need a paragraph to understand what was going on. Visual explanation was on point. Music was good. Art was good, AI was a bit wack but assuming I would have someone to play it with, could be very fun. Good job.

Submitted
Role Of The Dicer
LikeReply
SzymDeveloper75 days ago

Thanks a lot ! It was nice to watch you play it :)

Super simplistic and very fun! I liked the AI, at one point they hit their own teammate and I just thought that was funny. A bit hard to pick up at first. Wish I could've played with someone else, looks like it works best with 2 players. Good stuff!

Thanks ! Glad you liked it :)
Yes the AI is not very bright XD

An enjoyable short game. I feel like it would work really well for 2 local players (didn't have a local player next to me). For improvements, there are some display bugs (red zone covers attack zones). It would also be nice to have a button to skip the rest of the move if you don't have any sensible moves left.

Submitted
A Plate To Remember
LikeReply
SzymDeveloper75 days ago

Thank you for playing & for the feedbacks :)

I only wish unit info was more clear rather than looking at a picture in the description.

Great job on your game!

Yeah, I ran out of time to add the visual aids in the game.

This game is GREAT I was 100% engaged the entire time and played until I beat it. It definitely hooked me and I would definitely play more levels. It reminded me of like a classic chess meets Fire Emblem and it works so well. Great job!

I liked the idea a lot! It took me a while to figure out the way the game works, but that's all good. Would have been better if there are more units at the start of the battle (for the AI as well, AI felt too weak). Overall, pretty cool game!

P/S: I couldn't give live commentary due to not being able to stream, sorry

Thank you for the feedbacks ! glad you liked it :)

I really liked this. It's such a simple litle battle, but it's really engaging. The different units feel like they each have a different purpose and the combat is easy to understand. I especially like how you included friendly fire! It's also pretty amazing that you managed to get a decent Computer player working in the time we had. I have played a lot of games with AI opponents, but half the time they seem like they only play perfectly or only play randomly. Your computer seems pretty  intelligent and it feels great to play against.

Overall this gem is one of my favourites. Great work!

In all honesty the computer is still pretty basic and could be improved a lot. but I'm glad It is good enough for most people to have fun playing against it :)

Thanks for the kind words. I'm glad you liked it :)

It's crazy how complex this game can be with the few elements it has, I loved it! It reminds me of the strategy games I played as a kid in browser. The visual finish is perfect for what the game proposes and the artificial intelligence of the enemies works perfectly! Also, the addition of being able to play two people is GREAT, I can't wait to try it with someone. One of my favorite submissions of the jam <3