A platformer game where a lonely slime travel around the cavern with secrets.
Submitted by sohwathismelvin
Add to collection 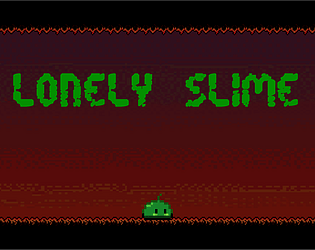 Ranked from 155 ratings. Score is adjusted from raw score by the median number of ratings per game in the jam.

How does your game fit the theme?
We feel it fits the theme of Out of control because it literally randomly changes the usual control keys that player often use to move and jump in game. They cannot control the time the key changes nor to what key changes there are. In addition to that, they are not in control of the gravity shifts as they try to escape the lava. Basically put, it fits the theme of Out of Control as we interpreted the theme as Out of Control being not in control, and in this case, the controls for movements.

cool little game.  I was surprised how much I enjoyed being a hand contortionist XD I appreciated the very forgiving ledges.  I got a good laugh when the input commands changed as I jumped over a 1 square pit causing me to have a "getting over it..." level fall XD I'm just glad it didn't happen twice.  Over all pretty fun though :)

Most difficult part for me was the when alt became my jump key.  Which I mean its fine until I needed to move right... and right was tab... I almost had to wait for new controls but waiting... waiting is for pansies.  I made 1 jump and 2 stair climbs before RNGesus showed me mercy.

Sadly I couldn't beat it as my character decided being ontop a rock was less ideal than being inside the rock and I couldn't move.

I like the idea and the sheer variety of controls than it can change to is crazy. It's neat to be using the F11 and F12 keys to move, definitely gave me a chuckle.  But I did run into a bit of a problem- after it rebound the escape key to let me move the game stopped letting me exit fullscreen, which meant I actually had to shut off my computer to power off. I'd also suggest you make the font for the control changes bigger, and possibly have it scale with screen size- I suggest this tutorial https://www.youtube.com/watch?v=95q79j0lNYA for how to do that in Unity (I used it in my game, it helps to account for different computers a bit). Still though, nice job!

Submitted
Out of Control(s)
LikeReply
AizinSubmitted1 year ago

Pretty fun game here, I like the idea but I think that its kind of hard to tell when the controls change. I think the font should be bigger, and maybe a more contrasting color from the background, and a sound that plays when it changes. Other than that, this game is really well made, I like the graphics, I like the challenge, and its all around a good game. Great job!

I think I had some kind of issue where I'd teleport across the map after getting a certain way through the level, and then I couldn't move after that. Still, I enjoyed the concept and particular playing Twister with my fingers on the keyboard trying to control the slime!

I like the visuals and the concept of trying to escape rising lava (which, thankfully, isn't rising too fast), but I think you really needed to restrict which keys are selected for the movement. Not all keyboards are designed the same, so when I had to move with the right CTRL, I couldn't because my laptop doesn't have one! My F keys are also used for adjusting audio, brightness, and other functions, so when I had to use F keys to move the game wouldn't register my movements but my settings were going haywire. Sometimes I  had difficulty telling what keys were being displayed. For instance, when I had to press on the down key to jump, the prompt definitely did not say "down key". When that happened I'd just run my fingers across all the keys until something registered, and sometimes nothing registered.

Aaaand now that I'm reading the comments it seems like everyone has made these comments already. Sorry to be redundant! Looking at the game images it looks like this map is enormous! So it's too bad I wasn't able to experience the full thing.

The game was a fun platforming challenge with a good idea, that somewhat lacked in execution because of key combinations in the controls that don't allow you to move skillfully. Nonetheless the visuals are great and the level was fun. The minor nitpicks I have are, the blurry title screen and the lack of music and player sound effects. Overall the game was fun and fits the theme very well. Nice job!

The game has a well-executed mechanic of rebinding keys. However, sometimes you get keys that you just cannot find or use. The presentation is really good and the slime looks great but there was a poor font choice when you need to spend a few seconds to decode "downarrow" and such. Anyway, I liked what I played and that's all that matters.

The mechanics of this game are so great, Great job!!

Love the game mechanic, it was pretty hard. Fun game!

Nice project, it's fun, but there are some bugs, I wait an updated version ^^

This was pretty fun to play, really loved how you need to quickly search for the new keys. Although with the font you used it was hard to read some of the keys that i needed to press.

Submitted
Get Outer My Space
LikeReply
UltraThizzSubmitted1 year ago

This was a cool take on swapping the player controls and definitely fed into the out of control theme. As others have mentioned it might be a nice idea to provide some indicator of when the controls swap but this is something that can easily be implemented post jam. I'm a big fan of the pixel art and the game looks great.

Overall a nice entry, good luck with the rest of the jam!

Good job on this game. Feels intense to play, and I kept trying and trying until I managed to get somewhat far, and it was actually fun, once figured out some of the keys :)  Some of the keybinds are difficult, sometimes impossible. Sometimes the move left/right box had just one key in it, I just pressed random keys until one worked.

Overall it was a fun and interesting game! :)

Submitted
Out of CTRL
LikeReply
Tydecon GamesSubmitted1 year ago

I really like the concept you've got here, it really adds to the challenge of the game when you think you have the controls just right and then they change on you - very interesting idea! Good job! :)

The idea of the game is really similar to mine :) I liked the art. good job.

Aw man, I really wish the game wouldn't rebind the keys to F1-F12. It basically a death sentence for me because i couldn't control the player with those keys :(  I was also praying that Alt + F4 as a combination, that would have been hilarious. Otherwise the platforming actually felt fine for me. I actually really like the aesthetic, plus the character is cute! There are also some minor issues that other comments other mentioned, like the small fonts or weird UI on the screen. Other than that, I think this is a solid entry to the jam. Enjoyed my time playing it. Great job!

I have seen a couple of games that change up the keys that the player uses but I think this game implements it in a really simple and neat way. My only real feedback is maybe you should not allow certain keys to be in the current control scheme together as I ended up tabbing out of the window on windows when I got tab to go left and alt to jump. Solid submission though!

Rebinding control is a common theme of this jam. The graphics is quite nice and that had me trying harder to play this game. Good work with the graphics.

UX-wise, that is not so well-done:

When I get to higher portions of the stage, I am suddenly teleported to somewhere.
Is it the end of level?

I really like the idea of the game, had some issues with some of the bindings that I couldn't find or that didn't work (I'm a azerty pleb) but nonetheless really Nice game!:) good pixel art