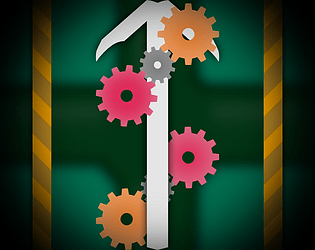 How does your game fit the theme?
You have a grabbling gun to move and it battery broken witch make's it change power state every 1 to 0.2 sec to random state between five state's (From very Fast to very slow)

My game show's in a youtube video for the first time

man you made one of my dream's come true

now I can die in piece.

if you want it to come true again, ill be making a post-jam video for all the games i made videos of in about a month

it was hard to play in windowed mode but i didnt know how to switch to fullscreen.

unfortunately i didnt have time to beat it, but the little i did play i greatly enjoyed. in needs some kind of in-game tutorial to let you know to hold down the mouse button to pull towards the grapple point

oh i thought they were just bystanders. i didnt know you could interact with them

Love the flow once you get into it!

Really fun game with a simple mechanic that could lead to very interesting level design. The presentation is very neat and is overall very enjoyable to play!

Thanks for the feeback

It's a good mechanic and the pull/swing is better than in some grappling games I've encountered, but being constantly sent back to the beginning is frustrating.

I always like a good grappling hook game, and the physics here are really nice, but I feel like the randomness doesn't fit with the precision platforming you are required to do. Sometimes random things are really beneficial and add tension to a game, but only if you can compensate for that randomness with skill. In this game, you need skill for good aiming, but then randomness decides wether or not you still fall in water. The game was really fun reagardless, but this mechanic lead to some fustrating situations.

but thanks for the feedback anyway ;]

Oh, in that case my bad. I might have skipped some of the talking robots because simply swinging around was so much fun.

Yeah everybody did the same XD

I really dig this mechanic! There's no greater feeling than swinging around.,I just wish it was a little more forgiving! The instant death when touching water I feel could be replaced with a timer, that way attempting to pull myself out of the water would add some excitement and tension (literally!). One time I flew just a little higher in the map and it reset me back to the start. Stuff like that made an otherwise zippy and fun game kind of discouraging!

The first few times I played the game I didn't even know there were keys besides using the mouse! But when I returned to the game with knowledge of the keys, I didn't quite use much of them besides moving left and right. I'm probably not picking up on a lot of the mechanics!

Sorry, I'm not trying to be harsh on the game. Even just using the mouse buttons I really enjoyed it! I don't think there's a soul out there who doesn't like a good hook-shot mechanic!

For the water michenaic you talked about, I never thought about it that way at all that might be an amazing idea to add :], and I wonder why didn't anyone seem to to read what Bobby "The Tutorial Robot" in the first level just by pressing F when near him wich he tell's you but I gusse everyone just start swinging around and not caring about the mizrable Robot XD, but these key's has been added so u not only could have more contral over the grabbling hook in anytime but add's the Out Of Cotnrol mechanic to the game.

and I'am sorry for putting death collider's everywhere out of the map but since you don't know I'am going to tell you,

THAT THING IS FAST, if you grabble to anything pick a Very fast state for the Grabbling hook and swing left and right you could get enough momentem to thrwo yourself acros the whole map in one shot and if that happend considiring not havving any water collider's anyway you will stuck falling forever and have to restart the whole game and bec  had 3 to 5 hour's to design almost 5 maps "Only 2 enclouded in the game bec of a bug" and Bec I'am a pretty slow level designer I was rushing the whole level design thing to the last, effecting the game bu having 4 of these map's being broken, and the mac version of the game not being able to upload in time bec of the deadline

Ah, I didn't mean to be harsh because I did really like your game! I had fun swinging around the map. Haha and I didn't talk with Bobby the tutorial robot - sorry! I zipped right by him 'cause I just wanted to grapple around. I dropped you a follow to see what you follow this up with! And no worries about the typos :)

Thanks bro as soon as the jam  finish's I'am updatinf this

BTW: Checking your game and giving you a fallow as well :]

Amazing mechanic, i just holded the very fast y rushed the lvl xDD it was so fun, Great Job guys

Thank's very much for the feedback, I didn't 100% understand your point but if your talking why the game has only 2 levels is bec it's a bug that I couldn't fix bec of the deadline there is about 5 levels in the game with an actual ending even tho it's rushed but I will update it after the jam end's so all the level's will be included in that version

For some reason I could not get the first jump right. I may have misunderstood something there tough. I believe you should have the controls written on your submission page, other than that, great idea.