Shooter, Cinematic, Movie, Zombies, Out of control
Submitted by Skipper9904 — 3 minutes, 35 seconds before the deadline
Add to collection 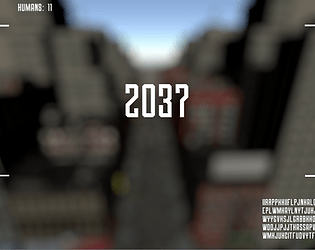 How does your game fit the theme?
You have no control over the drone targeting. You can just decide when you shoot. But be careful! Quick retargeting makes it difficult to take the right choice.

Couldn't really tell the difference between humans and zombies. And i feel like the only thing i was actually doing was clicking. Removing something like manual targeting makes it  fit the theme, but removes any skill to make the game interesting.

I'm honestly surprised my computer ran this at all, but I think this is a nice, if simple game. You just shoot the zombies and avoid shooting the humans. Easy enough to understand.

Well I learnt during the playing of this game that I am not to be trusted with the fate of humanity...

Really cool concept, I look forward to seeing this with the improvements you mentioned after the jam! Thanks for sharing on stream :D

Great job on going 3d, the lighting makes it look eerie! Its a bit buggy and jittery at parts, but apart from that, well done!

This is a very good 3D game, I'm surprised something like this was able to be put together in 48 hours. The concept is good although I'm not sure if the execution stood at the same level. It seems to be glitchy in some aspects but I'm sure you would be able to iron them out given more time.

Submitted
Work With Me Here
LikeReply
Stefano GalliganiSubmitted2 years ago(+1)

Interesting idea, though often some zombies infect the humans before the player has a chance to shoot them, and that makes it feel unfair. Btw I love the cutscenes

This game has a lot of jank. That's not an entirely bad thing. Some of the jank is appealing, such as the intro cutscene or the odd glitch I encountered where the trees freaked out, some of the jank was weird, like how restarting the game after winning caused the game to play in slow motion for some reason, and some of the jank was annoying, like how the re-targeting was sometimes (randomly) too fast to react to. There is certainly potential here, but the good jank needs to be sorted from the bad jank. There's also the fact that the random aiming makes winning largely outside of of the player's agency, but considering the game I made has the same problem, I do understand it.

That was fun, I liked it, good stuff!

Yea, the gameplay's not there, but I was laughing like crazy at all the story elements. Good job.

The starting cinematic has a great ambiance! I like the music you chose for it. The asset selection was pretty good too, as well as the scene building.

The gameplay itself is a bit too frustrating; especially when few of the people are infected the "randomly choose a target" always feels to never chose a zombie, which makes going from few zombies to a lot of zombies almost a given. It's also not great when the target is behind a tree, for example, or when the camera stays way too little time on a target, or way too much on one.

I liked the slow-mo effects! And visually the animations, run speeds, and so on look very good; it's easy to spot a zombie from a human, and it all looks like cameras from a zombie movie, with people fleeing from zombies. Great job!

An interesting idea, but I found the camera focusing on random people to be more frustrating than fun. What I thought it would originally be, would be the camera would move to different locations, and I'd have to aim quick to shoot the zombies. It wasn't very difficult to not shoot humans, only time that really happened is when they were blocked by like a tree.

Some particle effects would have been cool for shooting people, maybe a little blood spray.

I did really like that lights turning on intro, that was cool.

Without the feature the game would'nt fit the theme. But I know what you mean. I already implement some feedback to balance the game.

Thanks for your honest feedback!

I think the camera idea was really interesting, it really created a "I have my finger hovering over the big red button" feeling where you don't want to use it incorrectly but you have to react quick to get the zombies. I also really liked the mood you created with the intro, it really worked for me. The floppy bullets were probably my favorite part though!

I'm glad you liked it.

I liked the constantly recalculating camera, that was a really interesting way to handle the out of control element! It kinda felt like the zombies were constantly infecting others no matter what, which didn't really feel fair in the case where the drone targets too many humans right away. Either way, this is a cool idea with good execution! Good job.

Yes, the camera targets the characters randomly. Sometimes it is more about luck if you lose because you get too many humans in a row. It is difficult to balance this feature because it is the way the game handels "out of control".

But I will try to make the game fairer.

Nice game! I liked a lot the cinematic. The only thing is that I would like something to tell more easily betwen the zombies and the humans apart from the arms position.

I miiiiight have accidentally shot a human. But hey, I saved the city. Overall not bad for my first day, I'd say.

Even though the theme of this jam was "out of control", I think adding some degree of control over the camera (maybe switching between security cameras, or having your camera scan an area of the city) you could take this idea in cool directions. That is, if you want to keep pursuing this idea. It's got potential!

Switching between different cameras is an interesting idea. I will try to implement it.

Would be nice to be able to change between bordered and full screen! :D

Yea, I will definitely enable this feature on my next game.

Nevertheless thanks for rating!