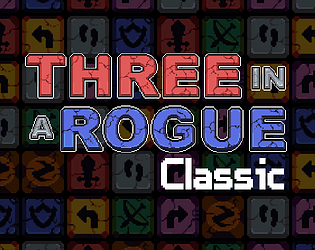 How does your game fit the theme?
You control the game via a Match 3 game, which often leads to you spiraling away from your plan of attack

I like it a lot! The match-3 mechanic combined with the character actions is really cool. I especially enjoyed the combat sequences, because there was a lot of decision making invoved. A lot of time is spent on movement though, which gets tedious fast. Maybe the rooms should be smaller, or maybe you could let the player skip to the exit after defeating all enemies.

This is a really brilliant game, whoa! Y'all've made something beautiful here. It does need a bit of tuning, sure, but well done! We also wish for a lot more move forward blocks.

Nice concept, it can be a really great mobile game! Presentation is flawless, and the game fits well on the jam theme. If your team made all that in 48h, you can make a final release in a couple more days! :)

An unusual twist to a well known mechanic - very interesting and clever concept, which is well executed. The art is also very pretty, so good job!

Except too hard to move out the first room, this is very good!

Submitted
Keypad Out of Control
LikeReply
GoneLootSubmitted2 years ago(+1)

Really good, though a bit frustrating moving from one place to another. I don't know how to fix it, but perhaps by making rotations just a move you can make, or making move up, move down, move left and move right into tiles to match. Besides that, really cool!

Overall really good game, even though I'm not really a puzzle fan (even the great one like 'Baba is you' didn't fly with me). Lack of tutorial got me, but the three tile puzzle is common enough that I could find my way. It's really interesting how you manage to merge top down tactical game and the puzzle mecanic. Could make for a really good mobile game (although it's not the first time I see the mix of RPG and three tile puzzle, but not in that way). Only critic on gameplay is that it slow, and it took me forever to get all the treasure at the beginning, so yeah.

The graphics are nice, this is good quality pixel art. Music fit and was relaxing, sfx were well done and well integrated. No bug encounter, so your code was good.

The core mechanic is really interesting but I think the tiles need balancing/reworking, as I found getting from A to B incredibly tedious as I rarely had more than 2 move tiles on the bored meaning I had to spend ages spinning in place to move once, to then encounter the same issue.

The polish on this is off the roof, and I think this is an interesting spin on the rogue-like theme (Although one that I've seen before on some flash games). Overall though, I think it's a really well-made game and it's really impressive how quickly you made this game. My only extra feedback would be:  Moving is way too much effort; It takes me so much effort to get from A to B that I tend to get frustrated.

Submitted
Tower of the Unknown
LikeReply
MenderbugSubmitted2 years ago(+2)

Oh hey, a fellow match-3 submission! The polish of this game is incredible and I really like the concept. I love combining match-3 mechanics with other gameplay, and this might be the most interesting implementation of that general idea I've seen. As others have pointed out, it's currently not very playable due to the lack of movement, but I think there's a fantastic (and sellable) game here.

Maybe you could just separate movement from the rest of the mechanics. That could be anywhere on the scale from "the player can move freely at any time" to "the player can only move forwards by X steps per turn", but that seems like it might be easier than rebalancing the grid to provide you with enough movement tiles (without losing the flexibility among your combat options).

Anyway, despite the movement issue, this is a fantastic game and absolutely incredible work for a 48 hour jam. I hope you polish this up a bit after the jam and release it properly!

This game is incredibly slow! Moving in the right direction in this game is quite an achivement. It's also funny that to get more movement stones on the board you would free the space up by doing random actions. Luckily enemies do seem to have just as much problems with actually performing any sort of actions.

Also because of how much time you need to complete just a couple levels the music feels repetitive.

I think it would've been maybe nice to have ability to collect everything in a room if there are no enemies left. And maybe to shortcut to not a door you are looking at, but to any door.

Also i don't think there is a way to exit the game so thats a bad.

Thanks for the feedback! I did have escape bound to "close the game" but then I added the "undo" feature and bound that to escape and unbound the close game button. I never got around to re-binding it since we were right up to the deadline.

This game looks great, the control scheme is innovative, and it looks like it holds a lot of variety and depth, but it absolutely kills me that the hardest action in this game is to take a single step forward. If movement spaces were more common, or forward movement was free, or something, it would feel a lot more fun to play. If the concept was polished up though, i'd love to try it!

Rated! This is quite an unique idea, and it feels really good to play. I think areas that might need improvement are the levels, but I'm aware the programmer had very little time to work on them, so it's forgiven. Definitely something to keep in mind if this game continues development after the jam, though! I'd also suggest making the Match-3 grid smaller, because at some points the tiles you need are on each corner of the grid, making you spend too much time getting them to connect.

Besides that, I really enjoyed the slow-pace of it and the music was really calming!

Great idea, AWESOME visuals. I think that the idea has a lot of potential to one day become very popular for mobile users or as a browser game. Don't abandon this project after the jam please!

Come back here after the judgement period ends ;)

The game definitely has a nice, weird take on the theme. The turn-based movement and abilities system definitely made the game slower-paced, but I think it works as a strange control scheme. The sound design is good in this game, as well - an annoying sound effect would have been a killer for sliding around tiles, but I found the sound to be great! Also,  I like the ornate art style for items that have been picked up. Great job! 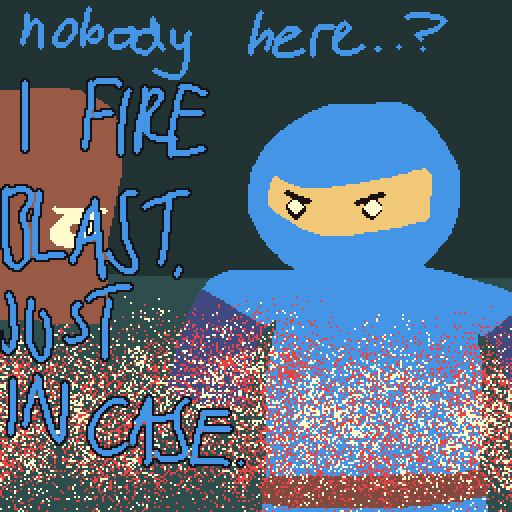 I LOVE THIS OH MY GOD

Thank you for taking the time to play the game! And thank you so much for the fanart! I love it  :D

Looooll! That needs to be put on the game xD I think a funny dialoque would work on it xD

Just fantastic - I was terrible at it as you saw, but I feel with a bit more practice I'd really get into it :D The art and music is just WOW

The look of the game is stunning and the controls are very clever.

I find the game fun but very slow. Maybe every move ( turn and forward ) should be stacked as potion so you can use them whenever you want.  Another solution would be to remove the turn action and let the player do the turn with a left and right button for one action point.

Thanks for the feedback! I like the idea of turning being a part of the match three because its more 'out of control' this way. Interesting idea regarding the action points though. I'll think about that.

absolutely "Out of control" , Really love this game

The randomness of this game is kind of smart. Usually it doesn't make sense gamewise, but your game used the 'out of control' aspect very creatively, I liked that. Perhaps, you might consider adding a more gradual tutorial throughout the game, but I understand that we had a little time. Also, what a good visual look, so appealing :) great game!