Heroes of Camlann community · Posted in any chance of further development?
Benjamin Soulé35 days ago

I worked on this idea again in 2019 for 2-3 month but the result was not as good as I expected. So I gave up on this idea.  I still love the core idea of this game and I'm happy to see people enjoying it !

The spaceship turn way too fast for me to be able to do better than 471m. I understand how you want to make the game fit the theme, but It's frustrating to not being able to play longer, especially for the powerup system which seems very interesting.

Well. Before playing your game I was thinking the "removing control from player"  approach was not a good one for this theme.  You totally changed my mind about that. The game game is gorgeous and the gameplay really work. The kick attack really help to not feeling too much powerless when some important control are missinged. This is very smart.

The game was fun, but I sometime got stuck without a double-jump / float bonus in some areas that obviously need these features.

I find the game fun but very slow. Maybe every move ( turn and forward ) should be stacked as potion so you can use them whenever you want.  Another solution would be to remove the turn action and let the player do the turn with a left and right button for one action point.

That was clever :) The hero design really fit my brain state !

I played 5-6 times, trying to reach higher score was as much hard and fun that the opposite ! Very relaxing game with funny narrative !

The game is pretty simple but it's easy to progress and the difficulty curve is nice. I would have prefer more oriented puzzle levels ( with warper, move refiller positions ) instead of just avoiding ennemies. But I guess such levels woudl be way more long to design...

I finished Spectacle yesterday and Infested today, they are both wonderfull games. You made me discover this genre, I already had a try at Shadowgate on emulator a long time ago, but got quickly discouraged. Now I guess I will have another try on these nes classics, it will help me to wait until your third adventure game !!

My first games were also very bad. I had to unlearn what tetris taught me... Playing in the corner for example is a first example of what you need to avoid in pentris.

Slavery and weapons are not like other resources. Some law can forbid slavery or weapons and cut your trade routes. It could have work with drug, I didn't think about offending anyone with this choice, I just wanted some quick illegal trade idea ( it was a 48h game jam )

Reply
Voidrun community · Posted in Any plans for a console version? Or any interest in outsourcing a port?
Benjamin Soulé1 year ago

The game is not selling so well, so It probably won't happen.

Is it the first time you launch the game ? Or is the game used to work fine before on the same system ?

The ship should be re-spawned in a zone with no monster or danger. There used to be some case when it was not working ( laser beams or flamer ) but it should be fixed now. Do you remember what monster/danger killed you on respawn ?

The game is supposed to run at 60 FPS can you please check the gameplay video at https://store.steampowered.com/app/1048560/Voidrun/ and tell me if the game seems faster than this ?

OK I fixed it. The current version should work on your computer.

When I download the 7 version I have a sdl.hdll file in my game folder can you please tell me if you see it ?

I have reduced the difficulty for the next version. I will be released on monday

You can't capture this one like the other smaller snakes. You need to first reduce his living space to a very small land. He's the boss of one of the full version planet.

Thanks for the detailed report !

The girold 2 unkillable rolling pills should be already fixed on 0.79 ( you can see your version number above title on titlescreen ) Girold levels have also been reorganized. Please tell me is you still feel they're too long this way.

I will try to fix all the other bugs reported on the version 0.80 release ( probably  this week )

I need some beta testers for my action game voidrun .

Thank you very much ! I'm still unsure about how many language I want to translate voidrun.  I will call for you if I need Brazilian Portuguese localization.

I's technically possible but I still need to spend time on it and also find a mac to make the build.

I will protect big ennemies from the self destruct effect on next version.

When the song end is the whole game game freezing ? or just the sound ?

Current ball spawning rules works well when you hold action button but are not so good if you want to place a ball in a specific position. I will modify them asap

If you think the game is too hard or if some specific stage or planets are too easy or too hard please let met know. Same goes for perks and ships

Please post here when the game freeze or anything weird happens.

It's fixed on the new version .  The damage of each monsters or armies was capped to folk number on version 0.4

// GAME BALANCE
- BUILDINGS all loose one glory point ( except tower and church )
- BALLISTA : To place a knight you must now pay a price equal to its value.
- WOODCUTTER : cut dice are now broken ( this will shatter at the end of the turn
- LANCELOT : Rework : Send an extra dice each turn this dice can't be rerolled.
- PENDULUM : new effect > Convert a beast to defend your castle.

// NEW CONTENT
- [beast] BEHEMOTH : 5 + 10 atk points for each buildings you have.
- [boss] VORTIGERN : When Vortigern comes into play, add a curse on the board. Remove this curse is Vortigern is defeated.
- [boss] ACCOLON : When accolon comes into play remove all dice from unfinished quests. Accolon gain 20 atk points if you have excalibur.

It's a known bug : Beast and armies can't deal more damage than your total folks. It means that all damage on your defense was not higher than 10 and even less after your folks go down to 1. I plan to release v 0.5 very soon.

I'm interested in Leo ability you described I will probably try it. For Arthur it seems a bit complicated ( It would be the only clickable hero ) and I also feel it may be broken. Sacrifice would be a good option but maybe not for arthur. At this point I think maybe we should create more than 6 heroes ( unlockable ?  ) and let the advanced player design his own hero table. I'm thinking about it  ( I also want a hero around money mechanic  etc )

I'll try to add Accolon on the next version. Maybe with your first ability version.  This one would be like not using quest every 2 turns because I guess very few player do 2 quests at the same time.

thank you It's helpful. I'm also welcome to suggestions for the icon I should use for as many dice as possible of one kind. A lot of people think it's only 3 dice. Before that I used a ⚂ ... ⚂ icon that was not working better. Any ideas ?

PS : The woodcutter bug will be fixed in next version.

Well I thought about this.  Infact I'm almost sure quest auto-validation will be a checkbox in the option panel. What I don't know is if I should activate it or not by default.

Ah I didnt think about the pendulum and beer interactions with the new rules. I will probably redesign pendulum.

I made almost 0 playtest with the woodcutter, I need to play with it and fix the lock bug.

Yes I'm currently working on it . I will let you know as soon it's fixed.

I love it.  Excalibur may become an optional quest later ( 2x quests will be GRAAL + random quest ) but I can easily remove Accolon from the boss list if excalibur is not in the quest list.

The Graphic designer already tried to separate missions from quest more clearly. What do you think ? 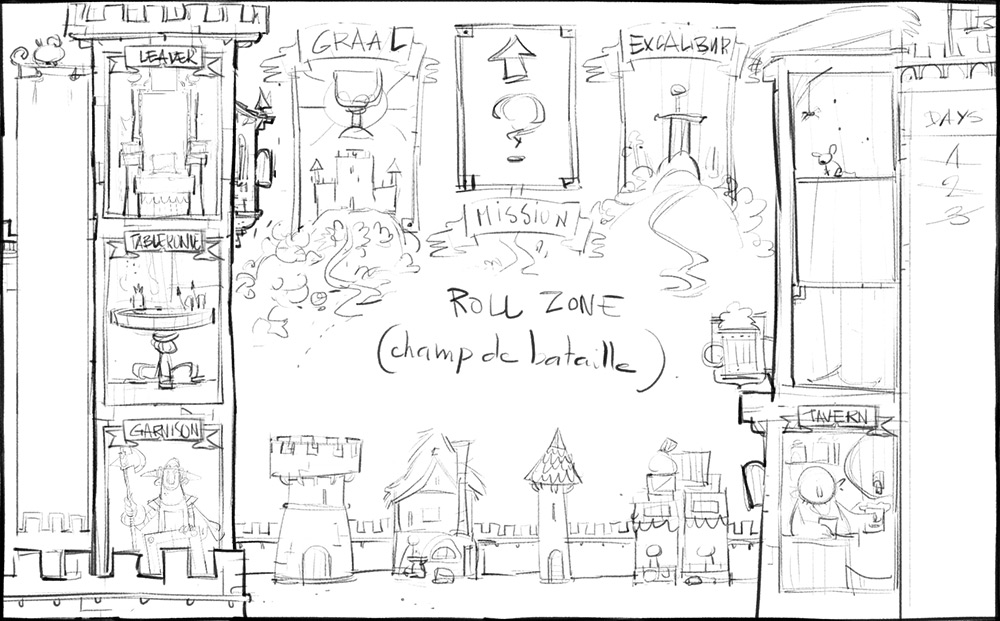