Sling yourself at breakneck speeds, shoot cubic demons, and find the light.
Submitted by Nazorus (@nazorus) — 57 minutes, 43 seconds before the deadline
Add to collection 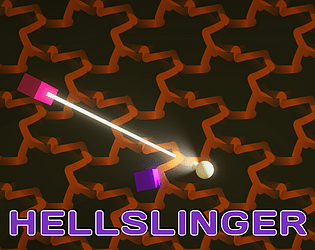 Ranked from 62 ratings. Score is adjusted from raw score by the median number of ratings per game in the jam.

How does your game fit the theme?
You can move at breakneck speeds and pull off crazy stunts in this fast-paced acrobatic shooter, but you do not have direct control on the player.

Nice double mechanic, i always like ideas like that. The rope is also a great game design idea, and allow a lot of controls when going at high speed. Laughed at the stupid SFX when you collide with an object XD

Thanks for playing! I felt the slinging and shooting were complementing each other well. Glad the SFX made you laugh :D

I just rated your great game! Thank you very much for watching the stream yesterday!
I would appreciate it if you could check out my game too!

Thanks again for playing! I'll check your game out later today :)

A very clever idea of finding the light source, accompanied with the good old "shoot to move" mechanic! The gameplay is pretty good, although the high speed on this background can make me dizzy pretty fast. Nice game overall, good job!

Thanks for playing and for the comment! The background could use some work indeed :)

I think there's an interesting idea in here, but the end result managed to frustrate me. I get that the camera zooms out when moving faster to indicate speed and give more visibility, but I feel like it starts way too zoomed in. I feel like the enemies hurt the game, at least somewhat. Maybe remove them entirely from the first level to make it clearer that you're looking for an exit, and not trying to destroy "all" the enemies. I would also decrease the spawn rate, or maybe even remove them, as currently spending the time trying to attack them really doesn't help you all that much. I dunno, that's just my thoughts. I may be way off base with the feedback, but those were my thoughts playing it.

Thanks for playing and for taking the time to write this, first impressions and general feelings are always useful!

I agree that enemies aren't bringing much to the game right now except putting some pressure on the player, and the camera could definitely be improved.

Had a bit of trouble finding the light in these big levels, but it all worked out in the end! I somehow like the "taking damage sound" quite a bit! Great job.

Thank you for playing! I had a lot of fun making this sound :D

You can follow shadows to find the light more easily, obstacles are also placed in a circle around the light.

Oh damn, that's actually pretty obvious: follow the shadows! For some reason I didn't think about it (only followed the intensifying light when getting close).

Thanks for playing, I'm glad you enjoyed it :)

Definitely a fun game to jump around in, but the walls causing damage and the busy background discourage the wilder movements. I'd also suggest reducing the per-shot recoil and increasing the fire rate to make combat more viable. The subtle guiding to the goal with lighting effects is really impressive, and I enjoyed the circular procedural level design. Well done!

Thanks for the feedback! I'm happy to hear the lighting effects are working well as a guide, the obstacles are placed in a circle for the same reason :)

I agree that walls can be overly punishing, maybe only some of them should deal damage.

I like the concept of the game. The movement felt great but sometimes I would go so fast I would get stuck in walls (by constantly tapping). Other than that, it was pretty fun!

Thanks for playing, I'm glad you had fun! I will try to address the clipping issue in an update after the jam.

The background is awful and looks like hell vomit, especially when going fast. Aside from that, the camera is a bit too jolty but feels good.  I almost got to level 5

Haha, thank you for the honest feedback.

I like the idea behind the game, but I don't really think it fits the theme. The feel of the game is really nice, besides the camera, which made me stop playing faster than I wanted to because I got really dizzy from the constant zooming.

Thanks for playing and for the feedback! Motion sickness definitely seems to be an issue for some people, I'll probably add some options for it after the jam.

shoot to move is done a lot, but the sling-shotting around really made it feel unique, really simple game loop but a lot of fun. I really like what you have done with this!

Submitted
Tower of the Unknown
LikeReply
NazorusDeveloper1 year ago

Thanks for playing, I'm glad you had fun!

I liked the tension the cubes chasing you provided and the zooming camera it added some exciting game feel to the gam e :)

Thanks for playing and for the feedback, I'm happy you liked the camera system!

I felt the enemies might not be dangerous enough, but they do manage to create some pressure it seems :)

Nice little game! Yet another 'shoot to move' game, but this one has the originality of providing a slingshot, so that's cool. I've also enjoyed the music and simple, yet effective graphics. Of course, the gameplay is nervous and the controls are responsive, which is always appreciated.

Thanks for playing and for the feedback! When I heard about how "shoot to move" was overdone I was afraid people would dismiss my game as just that despite the sling mechanic. I'm glad you had a good time with the game :)

Really nice shoot to move game! I think the mechanic of the camera panning out the faster you move is a really good idea!

Thanks for the kind words! The camera took a while to calibrate properly, I'm glad you appreciate it :)

Really fun little shooter. The shoot to move mechanic was handled well and the game play was frantic but fun. I did find a bug where I just blasted through the barrier and went off screen but mostly the game felt very well made. Overall, I really enjoyed the experience, great job!

Thank you for playing, I'm glad you enjoyed the experience :)

I have seen this clipping issue a few times, I'll try to address it if I make an update, thanks for telling me!

Shadows to find the light is very intuitive.

Thanks for playing and the feedback on stream :D

Cool mechanics , love the gameplay and overall fell of the game

Thank you for playing, I'm happy you enjoyed the game :)

Glad you enjoyed it, thanks for playing!

The movement feels good. Unfortunately is only took me 30 seconds to figure out it's best to not shoot at all and just quickly sling myself to the center.

Thanks for playing! You're right, there should be a stronger incentive to shoot enemies, although they do drop a little health.