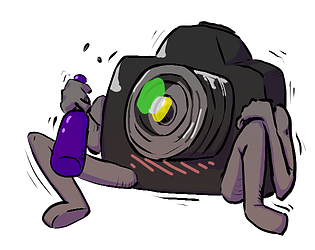 How does your game fit the theme?
The camera spazzes out if you don't remain in the rest areas

This game is very cool! The difficulty curve is great, and I liked the art style. Well done!

Quite a fun little platformer. Why are the controls esdf? It's really weird

accessibility for people with other keyboards

dawg what’s your discord, Ik it random but lmao. Just tell me is possible.

Nvm just add me when you can ;)

This is a pretty fun platformer, the purple "spring" was a bit hard to nail the timings of perfectly but I can admit platformers aren't my strong suit. The screen shake might be just a little too intense? Did actually make me a little nauseous the first few times. Only suggestion I could think that may help is less screen shake and add blur so it's still has the effect of disorientating the player. On the other hand it would ruin the crispness of the pixels, which are really nice for reference.

The actual running around and jumping is very smooth and I enjoy the way it feels, I don't have much experience with platformers but I can say this one was smooth at least!

The levels were real fun and I was impressed with how different each one actually felt with having all the same basic stuff. That was actually really nice. It did feel like I sorta zoomed through the game very quickly though.

As I mentioned early the art was real nice. The running animation for the little person was really flawless for how few pixels are actually being used. As someone who really prefers the less is more when it comes to game art, really nailed that. Nice and simple and not much more. The hat is a nice touch though, adds character.

Only thing I really have to mention on the audio is maybe make the button noise slightly louder when you step on it, I didn't actually notice it till the last level. It's always nice to have non visual indicators for things.  All the actual sounds are good though, props to Marek Domagała.

Controls threw me off multiple times but after reading a comment on why it was done I completely understand why you'll made the choice to go with it, was a good one.

Overall it feels like a fairly good start of a game concept. Lots of different directions you could take with it. Good job everyone on the team, I feel like a post jam version could really be loads more fun, and keep up that good level design if you do one.

Thank you so much for the time and effort you put into providing us such in-depth feedback. Glad you enjoyed the audio aspect, among other parts of CC ;)

This is a nice little platformer. I'm not sure how practical the camera shake mechanic is. It seems like it could be an accessibility issue. I played it in fullscreen, and I managed to get a little motion sick from it. I also found that the timing for the higher bounce on springs was tricky. Otherwise, I though it was really nice. I did appreciate the little detail that the jump sound pans between the speakers based on the player's location.

I love the idea of the checkpoint type buttons.
Removing environmental dangers and in it's place having to race back to the checkpoints when you make an error is quite interesting! You could probably make this in to something more, for sure!

Really original concept and a very fun game, you really took screen-shake to another level lol! I really liked the art style and the game was really polished. I didn't really like the spring block that much since it just seemed a bit unpredictable and I didn't really understand how to use it at first. However, that is a very small issue and overall the game was short but sweet and very enjoyable,I played until the end, great job!

Interesting, the buttons can be seen as "timed checkpoints" and that can be cool. Though I think it doesn't really fit the theme, because the only thing out of control is the camera before the respawn and It feels like a forced mechanic implemented just for the theme

I really like the idea of the safe zones, the levels were well designed. They were quite simple but not too simple and I think that's good for a game jam game because it's fun to play and you don't get frustrated. The only think I didn't like was the screen shake, it was too violent for me and it made me stop playing the game.

Platforming was very well implemented, and I liked how the springs worked, but oh man that screen shake... I had to stop playing it was really getting to me.

I really liked the level design from the game. I felt that the screenshake was a bit too violent (every time it got bad I felt a bit sick). Aside from that though, the game was a simple mechanic that was executed really well. Good job!

Woa. that was sick. I like the "safe area" idea you did there, it really makes you quite sick if you step away from the button for too long. The levels were pretty simple but fun and snappy. Also, that sound track was slappin!

Hey I talked to one of you on discord and i said i was going to play your game. It was a short but fun experience, the bouncing felt really polished and the level design was on point too. Cool game!

Hey, this is really nice. Cool concept and plays great. I think the camera shake could be a bit nauseating for some people, but it's a short game overall and pretty fun to get through. I liked the music!

Really fun game, simple concept but definitely great playability and fun music! easy figure out, and the "camera shake" is a fun feature!

Submitted
Aurora and the Twin Planets
LikeReply
MassénaSubmitted2 years ago(+2)

Question : How many epilectics did you kill with this game ? Great game and concept ! Levels are pretty well designed and fun to play. Little suggestion : You should kill the player when he fall out of the screen (like when he fall in the bottom of the screen) because he stucks in a ground and we must wait to die. Nice job !

lol, the one game where the epilepsy disclaimer is the most imporant part :D thanks!

Funny idea. I like it :) It's pretty short though, only took a couple min to beat.

Love that while there is an out of control element you can maintain or end it (within reason).   Good solid platformer, pretty smooth movement and controls.   Generally very happy other than ESDF was really weird for me :)