Why don't you just pick it up
Submitted by sininenblue (@sininenblue) — 8 hours, 24 minutes before the deadline
Add to collection 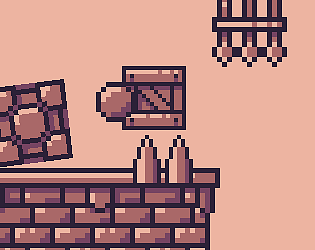 How does your game fit the theme?
you control the player using outside force which technically has the words "out" and "control"

"You're boss did not like it." - bahahah I LOVE it! The game was fun, just challenging enough to keep me hitting R and not stop playing, but I did try 5 times to not get stuck in the third level before I could get through it. I really liked the art and style of the game and the concept was really original and silly. A great combo! I would love to work with you on a future game jam if you're looking for a voice actor!

Congratulations on getting an honorable mention during the awards!

This game is hilarious and I love everything about it.* The Game Boy-style retro art and sepia tone really knock it out of the park. And it's a genuinely clever, funny conceit tied in well to the gameplay. The whole package feels like an excerpt from a full, published game, so major kudos for that.

*Except maybe the sound of the projectiles firing; that one gets a bit grating.

I ran into a couple technical issues. The sound effect volume seems to be somewhat unbalanced—occasionally the projectile sound would be really loud, but then quieter again, even in the same level. I also encountered major lag and performance issues in the level following the introduction of the conveyor belts (i.e. the one that starts with the falling stalactites).

interesting game idea and i like the indirect game controls

This is an impecable game that I had a load of fun playing. I haven't seen this mechanic done at all this jam and I really wish I had thought of it. It's an extremely original idea and the puzzles are so well done. I know how hard it is to design puzzles in such a short amount of time and I have mad respect for the quality here. Excellent job! This is definitely a highlight of the jam for me.

Amazing idea! The puzzles that it creates are very clever! I loved the art style, but I felt that the "cannons" are too similar to the background, making it hard to distinguish from it. Overall, its a very good game with one of the cleverest idea in the jam!

This game got so little exposure. It's such an amazing idea and it looks so awesome. Great polish on the game as well. Loved the level design and the way new mechanics have been introduced to the play over levels.

All in all, great game!

aside from looking great, this is actually a FUNNY game, its super serious and just super playable. great work- love to see more from you.

Great game idea! Is really fun to play, art is very nice and humor is not missing. Good job, really!

Really cool concept! Feels great to play, had a lot of fun!

I think a reset button would be cool, since i actually got my box stuck and had to reload the page

You can press "r" to restart the level. it says that in the description, but I learned from another submission to try it , haha.

I really liked your game. It is original and very interesting. But it has monotonous graphics.

I managed to land somewhere I couldn't recover from on a conveyor belt section. There was no gun that could hit me from a small platform before a belt, after a jump.

I love the style of the game!:)

I liked the art style and gameplay, unique and fun.

Cool stuff. The art style and the exectution are really good :)

Really impressive for your first game jam! The controls are simple but effective, and finishing each level was very satisfying.

Enjoyed the game (and text) a lot, great work! I had hard time to see the “projectors” or whatever they are, a bit more contrast wouldn’t hurt.