Get the ring. Easy.
Submitted by Mattabulous (@Mattabulous_), Spitzy, Pocket Fun (@PocketFun_Games) — 1 day, 6 hours before the deadline
Add to collection 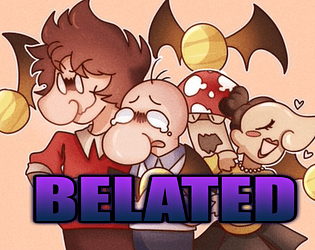 It should be posted soon :D

It's out now! Go ahead and play it! Best of luck :D

The small animation at the beginning is really fun ! Sound is a bit repetitve but voices are nice.

Level 2 is tough to finish, too bad I'm stuck I wanted to see how it ends :)

Maybe you can include some checkpoints or make smaller levels, starting over every time is a bit discouraging. But maybe you wanted to target "hard core" plateform gamer (which is not my case !).

Try replaying it! The post jam update makes it a LITTLE easier: maybe you can see the ending? :D

I tried and failed again ahah :D I made it to what is I guess the final boss level but I'm stuck at some point, the camera look back to the big character and a bat is killing me during the animation :( I tried 5 times to go quicker but I'm always dying ! Even if it's a bit frustrating I had fun playing your game, nice improvements by the way, music and sounds looks neater !

Oh no! It's just a matter of being quick enough :D

Still glad you enjoyed it and thanks for the kind words! :D

I liked it, especially the voices :)

- on the second level the platforms are so close to each other, that I can simple walk through them

Sorry about it being boring! And yeah, the second level is supposed to be like that (it's all about learning how things work etc.)

I think we both made our game a little too hard..However, I love the voice acting especially in the starting cutscene..

Haha: well, it was fun working on! Thanks for the kind words.

By the way, congrats for passing the 20 raitings!

Maybe you could test and vote my game too, if you have time. ;)

Our artist is mainly to thank! He is incredibly talented. Thanks for the kind words and thanks for rating, means a lot to us!

We will be sure to give you a rating when possible!

Hi! :D Super happy to be your 20th rating, congratulations <3! Amazing job with the voice acting! The beginning cutscene was very well done! The second level was a little too hard for me but I still had fun playing your game :) Great job!

Thanks for the comment! Apologies for it being difficult, we wanted to do something different (none of us had done a difficult platformer before!). A post jam update will make the game a tad easier. Also, there are around 7 levels too haha! Still glad you enjoyed yourself: that is the goal!

The art is nice, but the music is quite repetitive. In the second level, the part were you have to jump over a million disappearing platforms is just too frustrating. I also didn't see how you integrated the theme, but perhaps this becomes more clear towards the end of the game. Just four more ratings to go.

Thanks for playing our game! We’ll be releasing a post jam version, which will fix a lot of bugs. As for the theme, we made seemingly normal items, dangerous. Plus the twist at the end.

I loved the original art style. And the cutscene at the start was great. The voice over was cool too. But. The second level was insanely hard.I was there for 15+ minutes. I would add some checkpoints so dying in not so punishing. The third level was pretty great not too hard not to easy.

4. level. It was great until I fell down and got stuck there. I just didn't want to do the 2. lever again, so I quitted.

I would improve the ground check system, If I am on the edge of the platform with heels still touching I can't jump.

Other than that, great job for the limited time you had. Keep it up.

The post-jam update fixes almost all of those issues aside from the difficulty! We decided to make it hard >:)

Thank you for the kind words! :D

Loved the game! the story is simple but good. The only hard time I had in the game was in the second level, oh boy so many platforms xD. Another thing was that sometimes the character was sliding from the platform edges and yeah I died so many times. The game is really fun, awesome job! :D

I am glad you enjoyed it! The story was fairly rushed and I came up with it in around 5 minutes.

Yeah, second level is fairly difficult but sets you up for the final level!

The post jam update will fix player colliders which should prevent the sliding behaviour!

Sorry for the inconvenience man! But thanks for the kind words!

I really enjoyed the game and I think it fits the theme well. Sadly for me the audio kept glitching.

Thanks for playing! Sorry about the audio, we'll be releasing a post jam version which fixes a lot of the bugs.

The only thing better then that spicy twist at the end was the voice and plot for the whole game! Although the final level was a bit to hard for me.

Still I managed to get through pretty much all of the game expect for the final part of the final stage and I have to say that it was amazing. Amazing job :D!

Thank you so much for the kind words!

Rated - Really cool game!  I like the character style and the voice overs are awesome.  Having the little intros before the main menu and level is super cool, great job!  For a suggestion I think the invisible walls at the tutorial parts is unnecessary.  Great job on this jam game, hope you learned a lot.  Please check out my platformer game when you have time~ good day!

Submitted
The Quest: Trapped in a Lie
LikeReply
MattabulousDeveloper3 years ago

Hey man, I appreciate the kind words! In the post-jam build, those walls are gone so no need to worry about that one! We learned a hell of a lot; personally, it was my first time making a boss battle!

I'll be sure to check your game out! Have a great day too, my friend.

Fun game. Having watched the host's videos made their appearance super funny, especially Dani's.  The animations were super smooth and well done, I really liked how the mushrooms transformed to deadlier looking mushrooms. My only suggestion would be, when I'd land on a small platform if I was too close to the edge and try to jump again, the jump wouldn't happen. Other than that, great job guys!

Thank you! Yeah, the ending was an easter egg!

Annoying that you couldn't finish (bugs in this build), but at least you enjoyed yourself!

There'll be a post-jam update that fixes the small platform issue and also makes the game finish-able!

We appreciate the kind words!

I like the character designs and the voice acting.

This is a fun game. Like the humour of the game. The artstyle looks really nice. Overall a well made game.

I Love the unique artstyle. would love to see you create more games with this artstyle in the future! RATED 4****!

Thank you! Expect future games to look like this, our artist won't be changing anytime soon! :D

Just fyi, there's a hole in the death zone in the fourth level. I just kept falling and I had to exit to the main menu, losing all progress. I played through the game again and hoped it was a once off thing but it happened again. I gave up after that. Another bug I encountered is that after you quit back to the main menu and try to start the game again, the first line plays but the screen is left completely black and you're forced to close the game.

The main characters' designs, with their exaggerated noses, are really good. The enemy design is nice as well. The voiced lines are cool at first but after hearing them over and over after dying, which happens a lot, they get pretty annoying. The same goes with the music track.

The platforming is a mixed bag. If you were going for a rage game, it fits. But if not, it feels really unfair. It might be the case where you need to press the button exactly when you're on the ground which sounds fair on paper but in practice, it feels like the game is ignoring your inputs. As well as that if you don't land exactly on the center of those one block wide platforms, your character just slips off the edge. I would've liked to have seen the ending but the platforming just turned me off from trying a third time.

All in all, the artistic approach to the game was a job well done while the platforming is just a bit too unfair for my liking. If you want, check out Jonas' tips for making platformers feel good here, if you haven't already.

Thank you for the great advice!

I think it was because we focused on level design too much and we didn't focus enough on the bugs..

We might do a post-jam update to fix some stuff up; just because we think the game is actually really fun when it works! I'll see what the team thinks, and I'll see if we can get an update out some time soon!

Also, thank you for the kind words too, super good to hear you liked the art style; our artist is the one to thank! And yeah, the voice lines are supposed to annoy you; maybe we could tone down how often it happens!

The ending isn't exactly special; it's more of a lie though ;D

Anyways, thank you for playing! :D