Why hello there! :D Are you ready to have some SUPER SURPRISE PARTY PREP FUN!?
Submitted by meowmee — 2 hours, 26 minutes before the deadline
Add to collection 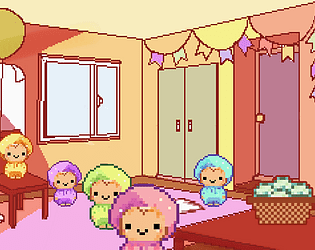 how do i open the game

So well done. That last jumpscare tho.

LikeReply
Sarah WILL KILL YOU HAHA2 years ago

Hello. To be fully honest, I really disliked this game, like REALLY.  It relys too much on the jumpscare factor and doesn't utilize the tracking mechanic at all, just seems it was there to try to scare and set up something that never comes up. The VA was ok, but it used screaming as a crutch too many times. And the jumpscares were lame af.

Hi, so i played the game and now im gonna comment about it. Lets start off by saying that the voice acting is good and the graphics are also very cool. The music also compliments each level perfectly. I got past the first puzzle level but i got stuck at the second one. Besides that i think this is a good game. Kudos, cya!

Funny game! Though, I couldn't complete the puzzle.

Thank you :D! Sorry you weren't able to complete the puzzle :(! We were hoping to add instructions to each mini game but ran out of time to incorporate them before the end of the jam :s. The puzzle pieces can be flipped by pressing space bar :)

Yeah, that would have been helpful the know ;-).

I liked the mini games and the jump scares.

The audio and graphics are very nice!!

Please check out mine if you have time

Thank you so much! :D I just finished playing your game (a couple times because it was fun :P) and leaving a rating! Great job! :D

The game is cute mate

Its amazing how you put all those minigames together in just a week :O

Hahaha :D Thank you so much!

Art is really cute... and also horrifying when it wants to be lol. It's impressive that you were able to make three different game types in a week! Although I do feel the platformer one could be improved a bit, your moving platforms feel kinda slippery and easy to fall off. The voice acting was great, really helped sell the experience you are going for. Awesome job!

Thank you for playing and for your feedback :D! We really appreciate it!

Thank you very much! :D We really liked the pixel art in your game too! <3

Submitted
The Quest: Trapped in a Lie
LikeReply
meowmeeDeveloper3 years ago

The ending was a such a spooky twist I loved it! really cute and spooky at the same time. :3

Thank you so much! We're really happy you enjoyed it! ^-^

Wow what a surprise, the end was unexpected! ;D

Jokes aside, the voice acting is pretty amazing, and sometimes it gives me a shock :D The arcade art style for the minigames reminds me of FNAF and they look cute! The guests seem to have potential to improve the end, but nevertheless this game is great!

Thank you for playing our game! :D We played and rated your game too, it was really fun!

Good game idea! Could you also please rate my game? :)

Submitted
The sign is a lie
LikeReply
meowmeeDeveloper3 years ago

Thank you so much! :D Of course, I played and rated your game :)!

In my opinion the idea for the game is interesting, it just needs a little refinement. I liked the fact that you had to play three different games to complete it. The platformer was ok, I just didn't like that the moving platforms make you slide down but that's probably because you had too little time to polish it.

The puzzle game was fine but I would have kept the pixel art graphic to make the game more uniform graphically speaking.

Other then that the graphics were really good and gave me the feeling of an harmless game even if I knew from the start that it was not.

The audio was good and the narrator was convincing but I think the voice could have been recorded better, there was too much reverb on it and too much proximity effect.

Overall I think the game fits the theme pretty well and it is a solid entry :)

Submitted
Tales of the Cursed Word
LikeReply
meowmeeDeveloper3 years ago

Thank you so much for your detailed review and for playing our game! :D We really appreciate it and have some changes lined up for the post game jam patch :)!