See what lies in this mysterious digital world.
Submitted by Kamran Wali — 3 hours, 27 minutes before the deadline
Add to collection 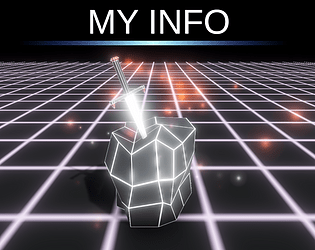 Thank you very much for playing and your kind words. I will check it out now :)

I like the glowy grids. (Very Tron-like). Similar to my game.

Check out my game if you can. I'd love to hear your feedback and get a return rating. :)

Submitted
The Race: A Track of Lies!
LikeReply
Kamran WaliDeveloper2 years ago(+1)

Thank you for playing :) I already played your game 9 days ago and rated and commented on it :) It was really fun. I think I made it to level 3 in your game :)  The gameplay felt so smooth and I wasn't expecting  the platform game twist. :) Visuals, music and gameplay was really well done. Overall it was a well made game :)

This was fun! I really liked the artstyle and the music :) Combat felt a little stuff but it was fun knocking enemies off the platform :D Nice work!

Thank you very much for playing and giving feedback :) Yeah, I need to work on the combat system to make it way smoother than it already is.  Again thank you for your kind words it is much appreciated :)

The only problem I faced was with the combat..You should add an ability to attack while moving..keep working on the game and improve upon your mistakes..Cheers!

Thank you for playing and giving feed back.  You are right the combat system requires much more improvements. I wanted to add attack while moving/dodging but ran out of time to implement it. Thank you very much for your kind words :)

Really love the look and the animations for this game. The character models are really cool, and I like the camera controls and the idea to put the health on the back.

As others have said, the combat is pretty clunky, but with more time and polish I'm sure this could be a very interesting game.  You should definitely keep working on it to fix some of the issues people have brought up and expand the game to a full story.

And thanks for playing and giving feedback for my game as well.

Thank you very much for your kind words :) Yes I will definitely improve the issues and will try to make it a full story. :)

The character controls and combat could be better but the art and music is great! Good job!

Thank you very much for playing and giving feedback :) I will work on improving the controls and combat system. Ran out of time to polish them at the end. Thank you. :)

I found both the theme and visuals interesting. Also, the music is good. Unfortunately, I had a hard time fighting enemies. Maybe make the camera follow the player like in a TPS. Likewise, the combat system could benefit from some sophistication, but of course, one week is quite short to fit all these features in :)

Thanks for the effort, keep it up!

Submitted
R U On The Right Track?
LikeReply
Kamran WaliDeveloper2 years ago

Nice work, a bit hard when enemies comes from the bottom of the screen as we can't rotate the camera. Also the player's attack feels a bit slow to start when you click the mouse button. However it has some cool combo mechanics

Thank you for playing and giving feedback :) I should have made the enemy generation from the top side now that I think about it because you are right, how will the player know if there are enemies generated at the bottom or how close they are to the player from the bottom? At the beginning I did have a different kind of camera follow that helped with the bottom side viewing but I had to ditch it because it didn't feel right to me. Wanted to work on it later on but didn't have time left. I also tried to reduce the attack delay but couldn't fix it in time unfortunately. :)

Thank you for playing and your kind words :)

Sorry I want to check out your submission but I can't get it to work on OSX.  😢

Thank you for trying :) Unfortunately I don't have any OSX OS machine so couldn't test it there and so I am not sure what is causing problem in OSX. I thought the OSX build from unity would work without problem but I guess I was wrong. Someone else tried to play it in OSX but couldn't as well. But I thank you for trying my game :) Also you should really continue with your game it was really enjoyable. :)

Nice work ! I don't understand the control but maybe my azerty keyboard don't help me ^^

Thank you. Yes the game was made with qwerty keyboard. I should have thought about the azerty keyboards as well.

LikeReply
Anansi AS - Games and learning.Submitted2 years ago(+1)

Unique graphics that I think went very well with the theme of the jam. Almost like Tron. It makes you feel that you're *inside* the game.

Wow! Thank you for your kind words.

The idea is fine and I like both the music and the visual style. The controls really needs some improvements. Overall a okay jam game.

Thank you for the feedback. I agree with, the controls needed much more improvments. I wanted to make them smoother but unfortunately ran out of time.

Rated - Neat Game!  I like the neon lights and the particles.  Great job!

Submitted
The Quest: Trapped in a Lie
LikeReply
Kamran WaliDeveloper2 years ago

Not bad! I liked the gameplay, but it would have been even better if the combat was more in-depth! I understand how that was more of a time-constraint issue, though.

Thank you for the feed back. You are right about the combat system. The initial idea was to give combo choice during the upgrade phase, were the player get to select the type of combo move to add. Unfortunately ran out of time before I could implement that.

I think controls are hard to use, and maybe you should add more feedback when enemies are hit.

Thank you for playing and giving feed back. You are right the enemies hurt reaction should have been longer. Since I was the only one testing it, I forgot to take in how others will find the enemy hit feedback, you know the saying developers make bad game testers :) You are also right in the controls part, it needed to be much smoother but unfortunately in this case I simply ran out of time before I could smooth it out.

I really appreciate that you had fun that means a lot. :)

please make a .zip file too next time.

Thank you.  Duly noted, next time I will make a zip file. In the rush and time contraint I forgot to make the zip files. Thanks for the advice. :)

Make such a cool game takes a lot of time so i can forgive you.

It took me a minute to get used to the control scheme, but it was smooth sailing after that.

The music fits this game perfectly. It sounds so, "The Future is 1999". And, putting the health bar right up the player's back was a great way to give them the information they need without HUD clutter.

After a few tries, I made it to the big blue boy with the hammer, but he turned me inside out right quick. It's great that you can interrupt enemy attacks with your own, and that sword slash projectile looks real nice.

If I could make two small suggestions:

1. You might want to put a collider on the portal for dummies like me. I thought at first that I was supposed to walk into it, but I just moved right through it and fell to my death.

2. I think it would be a bit more intuitive if the player moved relative to the camera instead of their own facing direction. The tank-style controls are a bit mind-melty.

I'm always so blown away by 3D games. Did you make this on your own?

Thank you for playing the game. Yeah I should have put a collider on the portal. I simply forgot it while working on the game. I wanted to give a rotational camera but unfortunately I was way behind the game mechanics in the end so had to compromise it. I tried to make the combat system much more smoother as well but ran out of time.

Just a small hint, after the tutorial stage, the blue flower with other flowers or the object emitting some blue orb particle effects can be picked up by pressing 'E' which opens up another blue portal. That portal is the "Lying" part of the game which I think most people will miss out.

Yeah, made the entire thing alone except the music. One of my friends helped me out on the last day with the music and yes his music is awesome! I will let him know again :)

Ah, I see. I didn't have time to test in other OS(MAC, Linux). I shouldn't have assumed it would work properly in those OS without testing. Thank you for the information.

Thank you Tried to make it as flash as possible. :)