Stun the different puzzles that will be presented to you for a chance to know the reasons for your confinement.
Submitted by VRAI Studio (@Vrai_Studio) — 2 hours, 27 minutes before the deadline
Add to collection 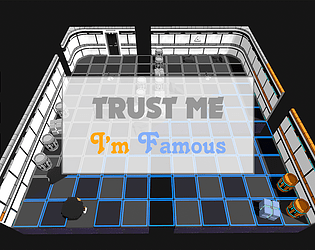 Rated - I speak second language so I know the difficulties of using another language, good job practicing your English skills!  Also, good job submitting a game.  Hope you learned a lot from this jam!  Take peoples suggestions and improve the game, or your next jam game.  Please check out my game when you have time~ good day!

Submitted
The Quest: Trapped in a Lie
LikeReply
in Principle GamesSubmitted1 year ago(+1)

Art-wise the game is fairly well put together. Models and materials look like they belong in the same universe. I only think that the precipices are difficult to visually detect, probably due to the blue square outline as well as the dark colour. Also, the trajectory trail looks unrefined in its white, monochrome tone. I think having it stick around for less time would be beneficial to the game's aesthetics.

The music is sci fi, which fits the game, and it's clever that you guys use it in two versions, fast and slow.

I didn't see the theme being used at all, in any form.

The dialogue suffered from non-English-native-speaker-itis. It's something I always recommend to devs that aim at an Anglophone audience, try and get a friend to help you proofread your text before release / upload. Some dialogue was genuinely impossible to grasp, like the one about sticking fingers in eyes, or something like that.

The game design was alright, but the puzzles I found to be far too permissive. You had far too many moves available usually. The teleports were better distributed, but the moves were in abundance, which led to a series of fairly mundane puzzles.

The controls felt very odd to me. I would have much preferred a mobile touch / mouse only approach. F, E, R, and whatever the other key was for my equipment felt really odd to me. I frequently had to look on the right to decide what to use.

Thank you so much for your big feedback.

We are French Team and in the final rush, we decide to google translate our history but we knew, it was bad ^^ Thank to saw that.

The theme was using because the game lie to the game on the trap (If you don't use your glasses) and other block and we have a good twist for the end but we didn't have time to finish our history.

Thank you again for your feedback.

This game feels well polished. The game mechanics is really interresting and fun. You guys should work more on this game as it has potentials. The environment and music goes well together here. Overall a well made game.

I really liked the game! It’s unfortunate that the game is so short, I would love to go through more levels. Good luck with your endeavors!

Awesome graphics! and the gameplay and controls are very good... Make this a full game!

Very Concept with a lot of potential. Personally i didn't really understand the story but that might just be me. I did encounter one bug where it wouldn't allow me to jump even though i had one left and i was required to move one step away and then back to do so. Apart from that very seamless game play and satisfying aesthetic. With a few more levels would have been a really great play! :D

The graphic of this game amazing. The UI is also pretty satisfying. It is a cool puzzle game!

This is a very thought out puzzle game, with good graphics and gameplay! Actually, this would be pretty cool on a mobile device, especially a tablet, if one can save one's progress - do a level when one has to wait for a bus, or for a database backup to finish :D