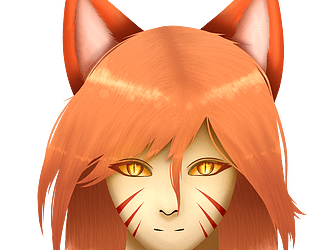 Interesting experience. Nice graphics and audio (except bit annoying keyboard sound in dialogues) It's fun to play and platform sections are really well designed. Dialogues are fun to read and ending have a nice twist. There are few typos though.

Please give my game a shot if possible ;)

I will try to play your game as well as from all others.

I will, as I try to do for all other.

I like the concept of the game.  Don't trust anybody.  :) The movement is a bit slow, especially jump. Anyway, I had a great time playing it.

It seems you have understood our intention. That's great!

No matter how friendly or cute someone does, a practiced liar never betrays himself.

Strange game design choice. Basically, if you interpret the lies correctly and you choose the correct path, you remove platforming from the platformer. So at that point it becomes a press D simulator, with the occasional press Space moment.

However, if you choose the platforming instead, then you get a fairly difficult game, made more difficult by the fact that the jump is really high, and cannot be modulated. Further, if you take two hits of damage, you die. What happens when you die? Start over. I quit the first time I died. I wasn't going to subject myself to replaying the same 8 forks in the road again. I think it would have been a much better decision to put a checkpoint before each fork.

The theme is explored somewhat, but in the end of the day it's not the game lying, it's Navi.

The aesthetics are odd. There are some blurry repeated textures (like the brown ground texture), some sharp drawings, like the main character, a blurry pfx, like Navi, and a stylised background. The obstacles are very narrow, and the spikes are dark in colour, so they are somewhat hard to distinguish from the walkable areas. Character animations are peculiar as well. She will walk while jumping, for instance.

I thought the piano notes, like C3 when jumping, C2 when landing, and another note I can't remember when taking damage was interesting. A bit obnoxious if the player jumps in corridors, but that's their decision.

An alright entry, damaged from my perspective by the full restart on death.

Thanks for playing and that's a really good analysis.

I agree to the following points:

But I disagree in the following:

So a big thank you for this awesome crticism.

can y rate mine

Yeah, sure. I try to play and rate your game as all others.

Pretty menu and music.  I like the character and world designs, too.  One thing that was throwing me off each time was the typing sound during the narrative parts.  It's probably fine but I kind of wanted a noise that was less intrusive if that makes sense.  Like a small chime or something.  The first time I jumped it threw me off!  I didn't expect to be able to jump that high!  Overall, I enjoyed running through it with the wisp character along for the ride.  Nice entry!

Thank you very much.

You're right that something more natural instead of a typing sound would be much nicer for the dialogs. A chime is actually a good choice, but I had no one here to record it.

I liked the atmosphere in this game with the music and flower petals! The piano as a sound effect was nice at the start but I found it getting a bit old. I also really enjoyed the banter between the characters. Nice make!

Yeah, it seems that the piano on jumping/landing goes a lot of people on the nerves over time. We can change it after the game jam rating.

Hi! :D I really enjoyed playing your game! Your concept is very interesting and the art is beautiful! The dialogue between the two characters is cute and funny and keeps the player engaged. Great job :D!

Glad to hear that. Thank you very much!

I try to play and rate every game. So I will play yours too.

I really like the writing and the dialogues! Also, the jump sound is a nice touch!

I like the general premise of the game but in opinion was not executed to its full potential. The floaty platforming was fine at points but then in sections later in the game it just felt like a burden. Although the general atmosphere felt good the game environment felt empty and after running through it several times it got boring. The jumping sound also got on my nerves after about my second attempt. It is okey in isolation but when constantly jumping it can be really annoying. On top of this it basically just becomes a memory game later down the line.

- The sections that were the easier path could have some obstacles littered in just a bit less. After a few play throughs it just became a running simulator.

- It would also be nice to have some inclination whether the wisp was lying or not and not just guess. (By the end of the game i just guessed instead of taking dialogue into account)

A couple of issues i found:

- Jumping sometimes wont work on the edge of platforms i think due to the colliders.

-Occasionally I got hit by spikes i seemly didn't touch. So some hitbox tweeks might be needed.

- Sometimes the door way to a new section would close on me. Although i could go back and trigger the area to open it, it was still slightly annoying.

I enjoyed the game to start with but it quickly got annoying and somewhat uninteresting. With some adjustment to level design and game mechanics this could have been a nice platformer but currently it falls short in my opinion.

All the best of luck in the Future, PiFox :D

I can agree to everything you said. If we had more time than a week we could have added more ideas we had. But we had only one week and had to make some cuts to actually finish a playable game.

So we definitely take your review to our hearts and will improve our future builds and projects.

Hopefully I've helped with some of my suggestions. Would love to see the game reach it's full potential!

But definitely a good start especially considering the limited time frame. (I fully relate to having to cut corners!!!)

Once again well done on your creation and i hope to see it reach new heights in the future! :D

First things first, I generally like the idea of "reactive music" but if you want to go that way two piano notes an octave apart are clearly not enough. I think the mood of the game is enjoyable and interesting for a platformer but the execution is lackluster. I found the dialogues between the player and the "spirit" character a little bit cheesy. Maybe it's just not my cup of tea.

I also think it's a problem that you can't discern truths from lies in any way except from choosing a path and realising it afterwards, it kinda makes the game not a liar, but simply a random one!

The best things in the game, in my opinion, were the main character design, her animations and the general platform level design.

Submitted
Tales of the Cursed Word
LikeReply
CleverAIDeveloper1 year ago

A big thanks for the very detailed criticism!

We appreciate it a lot and consider that for our future builds and projects.

I can tell you put a lot of effort into the AI!

The fumiest part is watching the interaction between the two. Some part of the level is a little bit much for me. Love the artstyle! I think the game would benefit with some contents beside pure platforming.

Speaking of which, is there an alternate ending here???

There was not enough time to put all ideas we had into it. I definitely admit that it would be better beside pure platforming.

No, there is no alternative ending.

Interesting idea, but the execution is not the best. Personally, the piano notes jump effects annoyed me. However the overall ambience is pretty chill and relaxing.

Thanks for the constructive criticism. That's what we appreciate the most.

Good game! I choose the path by my insight every time lol

I appreciate if you play and rate my game! Hope you will enjoy it!

Submitted
Don't Spend All Your Coins
LikeReply
CleverAIDeveloper1 year ago

I try to play and rate every game. Even if  to play 1138 games is a very ambitious goal.

This Game Is So Much Fun!

Submitted
The sign is a lie
LikeReply
CleverAIDeveloper1 year ago

It says there's a Linux build, but I don't see one on the game page..

Yes you're right. There is no explicit Linux build uploaded.

Nevertheless, you should still be able to play the version we uploaded as a Linux Gamer.