Monsters from other dimension invaded your world! Kill them all!
Submitted by TobiasM (@TobiasM_Dev) — 2 hours, 17 minutes before the deadline
Add to collection 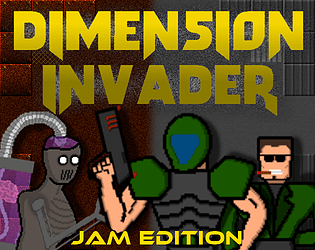 the controls are the best bit of this entry, great job. The aesthetics needs some tweaking, hoping to see more from you.

Rated - Neat game!  The controls felt pretty good and  I like the creature design~ hope you learned a lot this jam! Good job!  Please check out my game when you can~ good day!

Submitted
The Quest: Trapped in a Lie
LikeReply
LegendaryHeart8Submitted1 year ago(+1)

This game is amazing! I love the themes and levels. If you were to update it I would improve the level design so that shooting enemies would not be placed in hallways that are too short, causing you to not be able to dodge the bullets.

Submitted
Your tools are not
LikeReply
TobiasMDeveloper1 year ago(+1)

Thank you! I'm glad you like it :). Currently I'm done with fixing bugs and adding some quality of life improvements (including higher vision distance so you can spot enemies earlier). It'll be available after gamejam, but if you want to play updated version earlier I'm putting it on Gamejolt this night or tomorrow ;). After that I'll finish my other project and I will continue updating and adding content to this game :) once again thanks for the review!

LikeReply
in Principle GamesSubmitted1 year ago(+1)

I liked the main character's arm animation. His graphics in general were alright. The environments are a bit devoid of detail, but they work. I liked the art and animation of the aliens, however, their sprites were obviously blurrier, which doesn't look fantastic. The main menu character are also a little blurry.

Music was enjoyable and fitting within the game's universe. However, the track doesn't look properly. SFX are fine. Would have preferred more samples to increase variety.

Design wise, the dungeons (both alien and human) had interesting distinctions. The human base is primarily made of narrow corridors, the aliens have larger spaces. This marries well with the enemy design as well. Humans are more dangerous, because they are ranged, but they are squishy. Aliens are tougher, but melee, so they need more room to maneuver.

The thing that bothered me the most in the gameplay was the camera position. When walking south or north it gave the player very little visibility ahead. Every time I got damaged it was from the south, because I couldn't see the alien. You should consider making a more elaborate camera controller that anticipates where the player intends to go.

I didn't see any games lying. Even the character in the game weren't really lying. They just gave you orders and you followed. Basically, you play the GTAIII guy.

I think the dialogue has far too many typos. I would recommend running your text through MS Word or something like that to spell check. Typos lower the production value of your work.

All in all an enjoyable entry.

Thank you for in depth review!

We decided to put the lying part in the plot. I can't give you any detail without spoiling the endings. It might seem subtle at first but it's there.

About typos: that's what happens when non native speaker types story in a hurry straight into the engine (which obviously doesn't have spell checker) that's all I have for my defence :D.

I'll consider all things that you pointed in further releses. Once again, thank you for constructive criticism, I really appreciate it :).

sorry dude this is what i get when i try to open your game unfortunately my card driver can't play it but it seems so cool game btw!

Shame... But thanks for trying it anyway :)

Not sure if I'll be able to fix it. Perhaps you actually have to upgrade your drivers.

YES i will upgrade it soon ^_^

I really enjoyed the story of this game and how there are two endings! It makes you wonder what the other ending could be. My only issue is that the spelling and grammar could be improved

Enemies often were very close to the player, but wouldn't attack anyway. Otherwise, when the player is "above" the enemies, the enemies attack from a higher distance.

Other than that, fun game! I'm not sure of how it relates very well to the theme, but the OST is great!

Plot is related to the theme (both endings and choices at the begining).

Haha that was fun. Though there were some bugs like the monster hitting you once and if you don't move you can't take anymore damage. Also I would suggest making a WebGL builds for your future games so more people can play it. (Playing on browsers is easier.)

As much as I don't like shooters, I really like the beginning of your game :) And the music.

cool game! I like the way the arm moves towards the cursor, idk why. :]

Really nice game ! Struggled a bit without a mouse and with an azerty keyboard, but the game in itself is really cool. Feels finished, which is a feat in itself for a one week project. Artwork is simple but efficient, you got a fitting soundtrack and sound FX (again, pretty rare it seems) and the game is fast-paced, and fun. Bonus point for having a similar idea as our team but putting out a finished product :P

Constructive criticism time : I feel like the game window could be a bit more zoomed out. As it is, it's a little tight for a shooting game, we can barely see in front of ourselves and it's pretty much impossible to avoid being shoot at in corridors. But it's a minor nitpick, we are still faster than the bullets and the health make it a fair game

Submitted
Choose your side
LikeReply
Blake McKinnon ProductionsSubmitted1 year ago(+1)

Awesome game! wasn't expecting a story like that! loved the art style too.

Kool game. I like both side of the story. Gameplay felt smooth. Awesome work.

Kool game. I like both side of the story. Gameplay felt smooth. Awesome work.

Absolutely incredible! I really liked your game!!! It was the best one that I played so far.

I really wished there was a third ending though, of just ignoring them all and just walking away... XD

You could also have made the shooting a bit faster for use fast-fingered players!

Your game already feels really good, but this lecture shows how to take it to the next level:

Congrats for making it! Maybe if you have some time check out my game? ;)
Submitted
Liar's Map
LikeReply