Watch simple stories become legends as you tweak the truth.
Submitted by Voycawojka (@IdeasAlmanac) — 21 hours, 24 minutes before the deadline
Add to collection 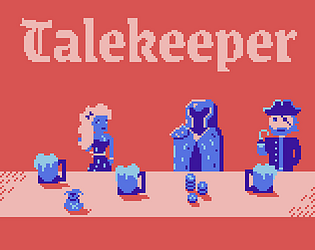 How does your game utilize the limitation and theme?
You collect stories told to you by people. You then modify those stories and tell them to other people in hope they'll spread it. Eventually the stories will come back. Hence "there and back".

Fantastic game!! I loved it so much, I didn't realize I had a candle behind my laptop until there was a black mark growing on my screen! Don't worry though, I it is just an off coloredmark now, but I can still use it
Again, well done, I was utterly captivated and really enjoyed it, amazing use of the theme

Amazing concept, really well done finding this idea, I am sure it has potential of bigger game! Very well done!!

This entry is really special and very well made. I loved the idea and it's one of the few games that I found really  captivating. Well done!

If you ever expand on this, you could add an overall story that changes with the different tales told and culminates in a fitting ending :)

Really fun, and different from the other game's I've played from this jam. The music worked well too, at least by sounding interesting yet not distracting from the gameplay. A young princess got attacked by a kraken in a magical inn, she ran away and tried to forget about it by playing the guitar. The story might have been from the tenth century, before guitars existed, but stories change over time, so who cares what really happened? (Or maybe the game is set at a time where guitars did exist, or maybe the music isn't trying to set the game in a specific time.)

If you're using a game engine and it doesn't automatically add its logo before the game starts, I think it would be nice to mention the engine in the game's credits. But yeah, I'm guessing that's something you could do after the jam, maybe adding a comment on the game's page in the meantime if you want to.

And nice way of using the theme! Timed platformers and moving collectibles are fun. But it's more fun to run into completely different types of games.

Submitted
Back for the discs
LikeReply
VoycawojkaDeveloper2 years ago

Glad you liked it ;)

Yes, I used a game engine. Godot normally puts its logo at the beginning by default but not for browser builds for some reason. You're right, I could mention it.

LikeReply
Opossum In A JarSubmitted2 years ago

I hope you play our game as I played your game

Very interesting take on the theme! Really relaxing and very nice to play. I really liked it. Additionally there was a good variety in options for the different dialogs/Tales. Great Job :)

very creative implementation for there and back, nice collectibles, really thinking out of the box, I really like your game!

Could you check my entry? I'll really appreciate it, Thanks!

I think my favorite game of this jam i've played so far. Love the take on collectibles, collecting tales is really cool, and the interpretation of "there and back" is also interesting.

Good visuals, good sound, fun gameplay. Only complaints i have are the little gramatical errors that would pop up with the modular sentences, and i think a better indicator of who wants to listen or tell stories would be nice. Even just being able to back out and come back to tell them a story when you have a better one would be good.

Fix those little things, add more content and some longer time goals or progression and you have a game i'd pay money for. Great work in under a week!

Really interesting spin on the collectibles limitation, indeed a very cool concept in general that could definitely be spun out into a full game. The visuals look great, although I think more could be done to make the text stand out, especially since that is the focal point of the experience. That aside, great game, good work!

I feel bad rating this cause i had a lot of trouble understanding how to play the game. At the end i kinda understood it, but not really... The idea seems really cool and the art is simple yet nice, maybe the colors could've been a bit darker since it was a little bright to look at.

Idea is really fascinating. I like graphics, atmosphere, and logic. Only thing about game is variety, but i can understand you because this is a 1 week jam. However, if you want to improve this game, i absolutely suggest you to add more and more stories, and different duties. I would buy this game, if this is a finished game. Nice work.

game baesed on listing to other, cool.

This game was so interesting and unlike anything I've played before.  Loved it!  Good music and art, and the color scheme drew me in way back when I just saw screenshots of it in the discord.  I love the story telling mechanic.

I couldn't stop playing this. I eventually completed it (only the 2nd game I've completed in this Jam). So intriguing, I kept wanting to hear how the story has changed. Well done

What a great implementation of the theme! I love how the stories go out and come around again changed.

Glad you liked it ;)

By the way, when you couldn't change the word at the end it wasn't really a glitch. There just wasn't any more words to choose for this one. Unfortunately I didn't have time to communicate it in the UI better

This game is intriguing. I could see it really becoming great. As it sits, though, I don't feel the player has enough good options at any given moment to feel creative or in control. Do expand it, though. There's something there.

Submitted
And We're Back?
LikeReply
jonfreakSubmitted2 years ago

This was a very original implementation of the theme, well done :D

Liked the art, the sound, the music, the game itself works for this jam and was quite relaxing with the music, good job :D

Wow man awesome game!  I think this is my new jam favorite, and the art is amazing!  SUch a creative idea for a mechanic, and probably not too easy to implement in code!