A game that gets harder as you play it!
Submitted by Aeph
Add to collection 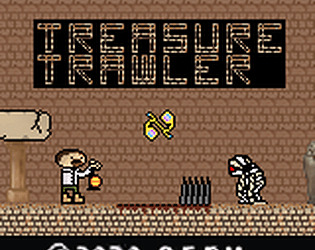 How does your game utilize the limitation and theme?
There(Into a tomb) to collect treasure, and then back to skedaddle with your booty. The collectable treasures count as your score, lives and also scale the difficulty of your return trip.

I reviewed you game here:

Hey, thanks for checking out the game, I appreciate you sticking with it as long as you did even through the issues. Sorry for the frustration!

This is my first game overall, as well as my first time using construct and posting on itch, which is the source of some of the problems. The jump is the part of the game I'm most unhappy with, I never got it to behave the way I wanted and I got so used to the controls that I also didn't lower the difficulty accordingly. It is possible, but the controls are really finicky, needing a run up to clear basically anything, including jumping up onto a small ledge.

I realized after it was too late to change anything how easy it would've been to give alternate controls and fullscreen, that's just an oversight on my part.

construct is a great engine. I'm currently make a platform tutorial on my youtube channel that will cover lots of mechanics you may find useful.

Cool game! My only suggestion would be to have the jump not lose momentum. It's pretty hard to jump on stuff when it feels like you only move a pixel left or right when jumping. Other than that, neat! If you have the time, I'd appreciate it if you also checked my game out!

Awesome game! The graphics are awesome and I love the camera shake you implemented. The sound is very fitting as well. I really don't have and complaint. I'd love if you could check out my game!

I only have one complaint and that is that when you jump all your momentum is lost making it pretty diffcult to predict where you'll land.

Anyway I really liked the game and hope it goes well for you in the jam!

Yeah, I was definitely trying to make it feel like an old gameboy game!

The jump is what I'm most unhappy with. This was my first game and I couldn't get the character to maintain momentum midair without having him be slippery on the ground.

The "Exit"-Sign is a little bit miss leading. I run about 4 or 5 times in it until I got that I've to move to the opposite side first (But somehow I also like that. I could figure out something by myself and because it is at the start I'd nothing to loose. But not sure if the majority likes that exploring-thing - at least I did ^^).

Unfortunately I wasn't able to play to the end. The controls are way too hard for me. I was able to collect 3 items but then I died.

Hey, thanks for playing and letting me know what you think! I was wasn't so sure about how the exit sign thing would work out, i had an idea about having something at the beginning to tell players to explore and then come back, but ran out of time to implement.

I realized a little too late that the game was a little too hard, given the janky controls because i got so used to it in testing that i was speedrunning xD. I'm definitely not happy with the controls. I couldn't get the jump to maintain much forward momentum without having the player slip around into hazards too easily while on the ground.

Fun game! I got a score of 163, is that too bad?
My browser kept scrolling down when I jumped, so I had to zoom out quite a bit. A fullscreen mode would fix that, I think. The music and sound effects are very good, but moving around while jumping was very hard. Overall though, good job!

Please check my submission if you have the time :)

I think i may have made deaths too punishing on the score, i didn't realize how hard the controls made the game because i got really used to them, but i wasn't happy with them. I struggled to find a balance that let you maintain momentum while jumping without having you slide around a bunch.

Thanks for playing and reviewing! I'll be sure to check out your submission when i go on my rating spree tomorrow.

Fun little game!  I like the mummy and generally how it look and felt.  The jump is too vertical if that makes sense.  It kind of kills your forward momentum which makes it feel a little stifling.  I had a lot of fun thanks for making it!

Hey, thanks for your nice comments! I totally agree about the jump being weird. The problem i had was if i had it maintain momentum better while jumping, movement on the ground was really slippery. This was my first game, so i know for the next one to put some time into figuring out tighter controls!