A fun applepicking race against time game
Submitted by Brainiac Games — 1 day, 17 hours before the deadline
Add to collection 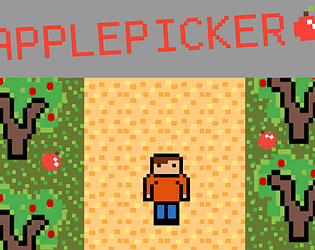 Fun quick little game. I like the idea a lot. I was hoping that I could buy something at some point... but maybe I didn't get far enough. I did really enjoy the selling of the apples animation.

Thanks for the feedback. As for the money, it ties into the story at the end.

That is some hardcore apple pickin' music!
Your base game concept is pretty fun and I like what has been implemented so far. If you plan to build on it after the jam is over I do have some suggestions!
Give the player some indication when they collect the apples. I was sitting at 15/15 for a while before I realized anything had happened from me pressing E near trees.
Maybe increase the amount of apples required for each level or reduce the time? Currently I just didn't see a way to actually lose since I'd have 15 apples in about 10 seconds.

The store cutscene was a really nice touch. Great job on the game, cheers!

Some effects for picking up the apples would be nice. And as a major improvement, if you want to continue the work on this game after the jam: Give the player something to buy from his money ;)

The artstyle is pretty solid. Just two tips to improve the art with nearly no work. Delete the bottom black line of your trees, so it looks more like they come out of the ground. Flip some of the trees or if you make several sprites, just delete or add one or too branches. 30min of work and a bunch of tree variants ;)

This is a nice little game for being one of your first ever games!

I recommend trying out varying apple types, and making the money have a little more purpose! Play around with some ways of getting the experience to change slightly to spice up the gameplay. Also don't let the player hold the button down to spam the inputs.

Thanks, pretty much everything you said will be coming in v2. It was great seeing you play it on stream as well btw

Neat little concept maybe would have liked simply no collisions on the trees (or just at the very bass of the stumps) opposed to the awkward way you have to walk past them and the apples just add up. Maybe increase the amount of apples that need to be collected each time and not have a limit but let the player continue to collect apples. A function like, y = a * sqrt(x) + b, where b is the amount for wave 1, a is some sort of multiplier (you could mess around in desmos, https://www.desmos.com/calculator), x is the wave number and y is the number of apples you need. This would just add some more complexity to the game and make it a bit more difficult. Other things you might want to consider for future updates are different maps (like maybe night ex..), some form of NPC that is also collecting apples (where trees they visit can no longer be harvested by the player), and visual cues to say what trees have been harvested (just more visual interactivity in general). Finally if you're looking to make a full release (just my speculation from the comments) maybe consider commissioning a composer to write some custom tracks moving away from the chiptune aesthetic (if you want me to point you in the right direction I'll be happy to help). Overall it's got potential but might need a lot of tweaks to be as good as it can be.

Submitted
Bring Me Back
LikeReply
Brainiac GamesDeveloper353 days ago

Thanks for the feedback. As for the collisions, I have fixed that and it will not be a problem in v2, I will increase the difficulty by spreading out trees, adding some new gameplay mechanics including the increasing amount of apples to collect. The NPC idea is super cool too.

Cool short game! getting apples and selling them. I think everything was well made, but the jiggling trying to get close to tree (the collision). Overall, awesome job! congrats on your entry.

Thanks for the feedback. I can confirm that I have now fixed that big and it will be fixed in the next update!

Update: I have just released a devlog outlining the changes coming to Applepicker in version 2!

Check it out here

Really nice game, I like the idea - definitely keeps with the theme and the fact you managed to include a cutscene is awesome! I got to the final wave - definitely a bit intense right at the end, but a nice curve up until then, found a system that works :D

Here's my feedback (Don't take any of it to heart, you're game is still awesome!):

Either way that's just my feedback, it was an awesome game all the same!

Woah! That’s a lotta feedback. I agree with pretty much everything and I’ll definitely keep these in mind for the next update

a very fun game! enjoyed it a lot

it'll be nice if you check our game too (:

Thanks for the feedback. Of course I’ll check out your game(as long as it is macOS download or browser)!

A fun idea, but i think needing more apples as the game went on would've made for a better difficulty curve than lowering the time. It might even work well if you have the time limit lowering every level, but be able to collect as many as you can in the time limit without knowing if you sold enough to beat the level until the store animation. Having to only collect 15 apples every round also made it so i didn't need to go beyond the first line of trees.

Thanks for the feedback. I’ll for sure make it more difficult in the next update.

Hey! I played the browser game, zero issues. I beat it! There was a little cheesing as others have said, but its still a good idea and fits the theme! I would suggest adding a sound for when you pick up an apple instead of solely looking at the number increasing. Well done!

Great idea! But I would make the game more chalanging. It's very easy to collect 15 apples and it became boring soon.  It would be cool if you saw how many aples are there based on the sprite instead of writing it down.

Also the problem with the jittery movement - I think you change position but you should change velocity of the rigid body instead and unity will figure out what to do :)

Ah thank you. I thought it was an issue with my colliders. I was considering adding a physics material with 0 friction but that didn’t help. Thanks for the feedback and solution!

Thanks. Just fixed that bug!

Nice game! I like the use of the theme

Fun! I would have liked the UI for the amount apples to have been quicker other than that I get what you were trying to do and with more time this could be an awesome game, I like the idea a lot! Great job!

It's a small game but still interesting. It is easy and good for casuals.

It'll be nice if you give a rate and a feedback on my game too :)

Thanks for the feedback. Of course I'll try your game(providing it is a browser or macOS download)!

A small game with interesting possibilities. It can get a lot of fun with a few more maps and maybe an easier way to figure out which trees to pick apples from. I like it

Thank you for your feedback

This is a cool little game! Both the theme and the limitation are implemented very well. I think if you fixed the hitboxes and the camera, and added some different levels, this would be a very complete package. Nice work!

Thanks for the feedback. Just one question, could you please specify what exactly is wrong with the camera?

Nice game, I like a different twist on the theme. Did find the tree colliders were a bit jittery and the next wave didn't challenge me more but apart from that it was a solid experience! Happy jamming!

Thank you for the feedback. The lack of challenge seems to be a complaint by most people and I completely agree. As for the hitboxes, I should have used on trigger enter instead of the on collision enter. Should be an easy fix after the jam is over.

Good luck man! I hope it goes well. Check out my entry if you want: https://cursedsoldier.itch.io/two-forms-vim

Nice game man! This could easily be turned into an engaging idle game I think.

It was kinda stuttery when you walk into the trees :/

And I just ran up to the first row of trees and then just held "D" while spamming "E" to collect 15 apples really fast. It's not that hard once you figure it out.

I think you should be able to collect more than 15 apples each Wave so you can challenge yourself and earn more money.