After the great catastrophe, our people are missing. Your mission is to rescue and bring them to safety.
Submitted by Strani Anelli (@el3um4s) — 57 minutes, 18 seconds before the deadline
Add to collection 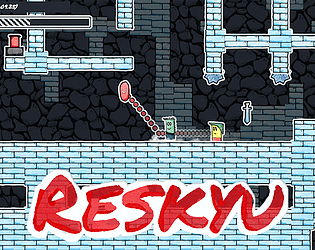 How does your game utilize the limitation and theme?
You have to save (collect) people after an unknown catastrophe and bring them home

nice game, please check mine and any suggestion are welcome.

Lot of fun! I love that we're rescuing people. I love the design as well! I wasn't a huge fan of the sound design, but the game play was super entertaining. I played it several times!

Great job! The art and gameplay were really nice.
One thing to note, maybe you could have added coyote time/hang time for the jumping as it was hard to get to some platforms.

Yes, I have to improve the jumps.

Well done with the art style! I really like how the characters look. I just wished there were more levels to play.

It'll be nice if you give a rate and a feedback on my game too :)

Well done, quite big and feels good to play. A bit too floaty, but doable. I hit a bug in the second level, I reached the flag with three people, and when I went to gather the last two (the yellow ones) they died as soon as I touched them?

The landing sound is a bit weird, it doesn't fit in the other sounds.

Thank you. And thanks for your advice

specially you interpretation of "there and back" where you some times don't want many people tied to you , so you have to drop what you first then get back to them ;)

- I was bothered by the jumping mechanic where you can't really control the strength of the jump , other than that awesome little game ;)

I hadn't thought about controlling the force of the jumps. I think I'll have to try to change something.

Nice game. The art is amazing and the game concept is super cool. I would really appreciate it if you could check out and rate my game.

Your game is fun too

Love the art style, really fun. I also would have liked some more levels. nice take on the theme. I love how the people you rescue has a delay when you move, adds a bit of danger element and strategy to keep them safe. Great entry. :D

An interesting take on the limitation "there and back". Collecting trapped/helpless characters was a fun spin off of coins, but the follow mechanic helped make it stand out! I was a real shame the game had only two levels as just those two were a blast. The art reminded me of Paper Mario. Absolutely love the toon design. My only gripe, besides length, is with the sound fx. Maybe I just don't understand it, but the piano noise that the character is very constant and annoying. The sword sfx seemed fitting though! This can really turn out to be an awesome game! Great submission.

The levels are very few: I didn't have time to create them because the game mechanics took me longer than expected.

On the music and the sounds I agree with you. I hope I can improve them.

Nice concept! I also had this idea for my game of collecting party members + back_and_there, but slightly different! I'd like you check it out!

I also really like your game. (And to be honest, yours is a lot more polished than mine :))

I really enjoyed this! Collecting people is a really good interpretation of the jam's limitation.

The 'follow' mechanic you made for the people felt really intuitive and creates some really interesting situations such as accidentally flinging people into traps. I really had to think about where I jumped and it was just genuinely fun to play with.

The controls felt responsive with some good animations that gave nice feedback. However, I think it would have benefitted from a little screenshake when you land after a jump. I originally got confused and couldn't work out which of my actions actually caused the screenshake, until I realised you used screenshake on the sword traps instead of on a player action; It felt jarring.

Overall it was a great entry and I really enjoyed playing it. I'd love to see some more levels in the future!!  :)

Yes, after playing it a little bit you are right: the screenshake caused by the swords is confusing