Devtober was one of the best things I've ever done. My problem going into it is that Night Forest, which I have been planning for years, is such a vast game that I had been too intimidated to get started. Devtober gave me the discipline to do a little bit each day and get over the initial hump. I worked every day of October save two when I was violently ill. I am thrilled with how much I accomplished! I project that if I continue working daily, I will finish the game by Christmas. One key attitude adjustment I had to make this month was to eschew perfectionism in favour of good-enough-for-now work. Night Forest is a phonics game so it needs a couple hundred pictures illustrating different words. I needed to give myself permission to quickly dash off mediocre sketches rather than make each one a masterpiece. I can always swap them out for better art later once the game is complete and working. After the scope creep of the past month, Night Forest is now designed to include twenty-four mini-games  each of which has an animated introduction. As of the present moment, three of the 24 are completely finished, two are almost finished, and most them are at least started. I am particularly proud of the animation of the spider making smoothies, and of all the clay / sock puppet characters I have made for the game. It has been really great to be able to do art, sound recording, or programming each day, choosing which one based on my mood, energy level, and available time. Let Devember begin!

October 31st - Rejiggered the third mini game with the result that the whole first of the game's eight phases is playable.

Hey IrishWilly (and anyone else with small children who happens to see this), shoot me an note at mathesonkendra@gmail and I will let you know when the game is ready for playtesting, which will hopefully be by Christmas. I will be so grateful.

October 30th - Squashed bugs, worked on transition animations, hammered away. The game can now be played in campaign mode as far as the start of the third mini-game.

October 29th - Lots of art so now the alliteration mini-game is ready to playtest.

October 27th - Hammered out some art and sound files for the alliteration game.

October 26th - Made an animation to transitions between the Rhyme Game and the Alliteration Game.

October 25th - Swapped out Placeholder placards with placeholder art so that the rhyming mini-game is ready for preschooler playtesters.

October 23rd - Lots today, including the wonderful weirdness of creating stop motion footage of a spider blending up fruit smoothies. Made a garbage can, a toad, and a moth, recorded and inserted lots of audio.

October 21st - Created a system for saving and loading games for any number of users. Built a top menu for selecting between launching a new game, loading a saved one, and free play mode. Also made a raccoon.

October 14th - Made an alligator and a spider. 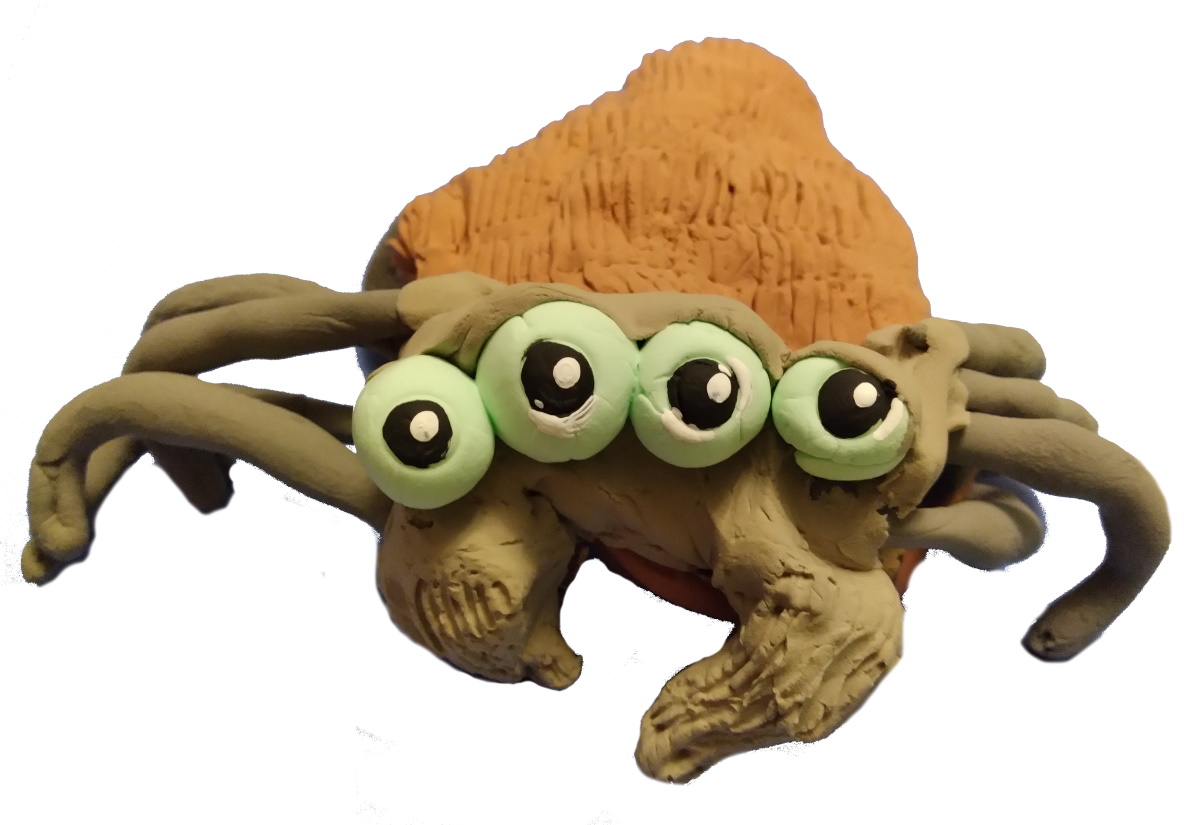 October 12th - Squashed some bugs and then added to the interactive vowel lesson.

I won't be submitting a project for this jam. My claymation project has a longer timeline, probably a Christmas release. I am looking forward to trying all your creations, though.

October 11th -Designed and made the map for the consonants game, inserted the baby owls animation for the vowels lessons.

October 10th - just mindless editing of assets today. I wasn't in the mood to do anything more complex but the important thing is that I did something.

October 9th - Playtested and bugsquashed. Two minigames are now fully working but I may have broken the third in the process...

October 8th - So much progress today including successfully porting the letter recognition mini-game and creating the core cycle of the new rhyming mini-game.

October 7th - Just a short session today but squashed a bug in the phoneme isolation mini-game and worked on the opening sequence.

I don't know whether I will have a playable version of my game in eleven days or not.  Either way, you can meet the main characters of my game now in this animated e-card I made for my brother's birthday:

October 6th - Made an opossom.

So glad to hear it! I have a three-year old, too, and he has pre-approved several of the mini-games in Night Forest in their earlier forms. I hope your child will like them as much!

October 1st - made a bat puppet, converted and transferred files from one source game

I'm Kendra, a former teacher with lots of experience teaching children to read. This Devtober, I will be working on Night Forest, a complete phonics program I have had in the works for a long time but too often neglect in favour of short-term projects. I don't like social media so will be posting a daily comment on this thread noting my progress. I do not expect to finish the game within the month but I am committed to working on it every day.

Thanks again for encouragement You may enjoy the video I just posted to Cozy Chess game page with explains how I programmed it.

Thanks again for hosting the jam. You may enjoy the video I just posted to Cozy Chess game page with explains how I programmed it.

You may enjoy the video I just posted to the game page with explains how I programmed it.

Thanks so much for playing! You may enjoy the video I just posted to the game page with explains how I programmed it.

Thanks for playing! Using the toggles on the right, you can switch the music on and off, as well as the only sound effect. Do you mean volume control? Because that's a great idea. I can add that.

Thanks so much for trying it, being so kind, and finding an easy bug to fix! I'm struggling to squash a tricker one at present. Pawn promotion can sometimes mess up the bot.