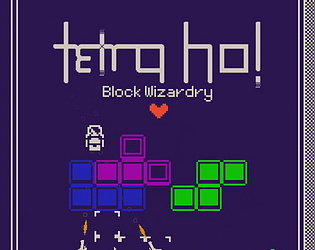 Oh right "Green was +1" "Yellow is 0" "Black -1" I kinda messed up on the cards you printed out! I guess +4 extra Green, +4 extra Yellow, -8 Black from the current total! Should fix it!, yeah 120 seconds was too lenient so I'm thinking like 60 seconds or 90 seconds might be the fix! All I do know is the game is super close as I worked out internal and hidden maths out! But that is likely the balance I suggested now, and was part of my notes to begin with as alternative, but as I had to convert from text to just colors, and not lose anymore time, I just went for that approach as I had a late submission due to not seeing the limitation until exactly on submission day sigh...

Awesome game! Boy was that boss tough but I beat it!The combat was very creative and unique, and once I got the hang of it, felt very satisfying. I liked how it made you think very quickly on how to make 2x3 areas, made you feel very cool when you successfully did it.

The text boxes were unfortunately placed and often got in the way, especially during the areas where you had to go downwards.

Submitted
You are [UN] Dead, Enjoy Your Stay
LikeReply
puzzudSubmitted2 years ago

Wish I could control when the blocks disappear.

The most creative tetris based game i ever playied.

Cool idea and implementation of it. I like the style and the music, feels very polished.

At some times the dialogue was restricting my vision I found out about the E key later. And the learning curve could be flatter, from the second level on it gets fast and mean really quick. Sometimes blocks really blocked the flamethrowers and sometimes not, I didn't quite find out what the rule was there.

What bugged me most were the short period of time until an unused block disappears (or the long time until the new one appears) often the first disappeared right when the second one was appearing, that was frustrating. Maybe you cheat a little there and hold one block longer when a new one is appearing next to it -or change the times for (dis-)appearance- to make it feel right for the player.

It didn't help, that the position of where the block will appear relatively to the mouse cursor didn't feel right. That did increase the time to "aim".

Overall a great game, that needs some fine tuning. You should definitely follow up on this one.

A really unique mechanic!  It does feel a bit easier to kind of spam the blocks at times however.  Game was indeed a bit difficult, it was hard to think about the types of blocks and dodge bullets at the same time, which encouraged spamming a bit.  I think slowing down the pace of this would make it even better, but this is definitely worth playing and I hope you tweak this idea more!  Great job!

What a glorious game!
Maybe a few small extra things that can be polished:
1) Don't cut the music when showing the end-game screen, it's such a nice track.
2) The character movement by just gliding without any sound is a bit awkward, maybe add some waddle animation to the sprite and/or some light taps for the sound.
3) Add some decoration to the levels. I assume the settling is inside some castle, so something like nice red carpets, some candelabra and maybe armor stands and weapon racks? Would make the game much more pleasing to look at.

P.S. only after completing the game I found out that RMB was to rotate pieces :facepalm:

Really good concept with some fantastic polish! The UI was super nice and I loved the clicky sound effects. The gameplay is really creative, albeit very hard at times, but I enjoyed playing overall. Good job!

Very cool and unique mechanics! I had a blast playing it.

Super neat idea! I've actually had something quite similar brewing in my head for quite some time now but all concrete I really have is a Trello card labeled "Tetris piece dungeon".  But the execution had some major issues... 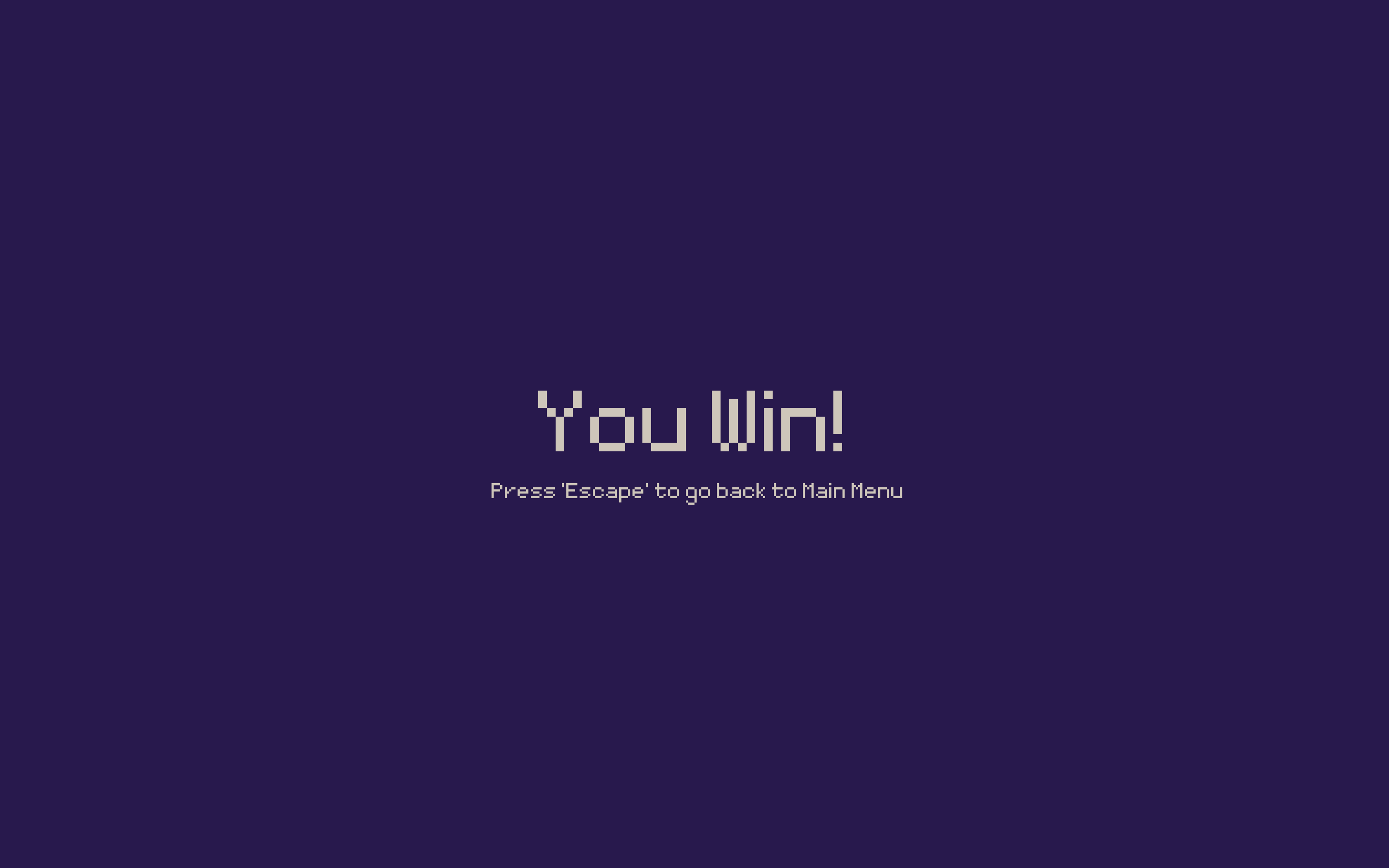 Nowhere was this more apparent than in the boss fight. Everything up until that point was decently smooth enough. Whats up with these black border things btw? 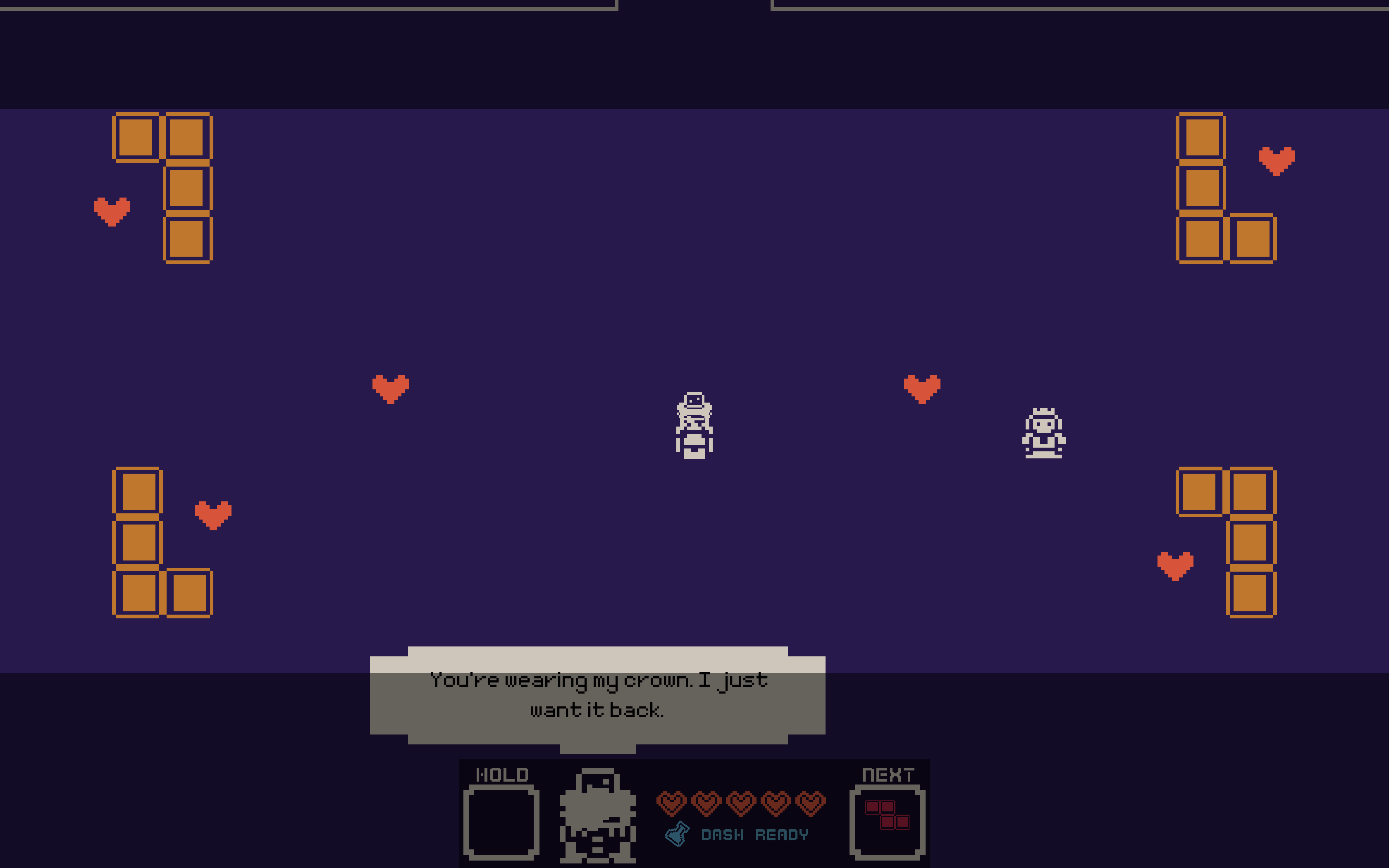 The biggest issue really was the block disappearing speed. You pretty much just had to plop those two blocks down immediately so that the first one will not disappear before forming the 2x3. I mean you barely had enough time to rotate the second block once maybe twice if you're lucky. And that is of course if there wasn't some offscreen wanker shooting down the blocks.

The gunners were way too relentless! In the boss fight point where she summons the adds, the best strategy really is to gallop around the center stage hoping that they kill each other (and not the boss though to not trigger the flames). The shooting speed should be way less. I mean now the boss managed to put few bullets in you unless you were already strafing 90 degrees to the side immediately when the fight starts. The damage the shots did on the blocks could be way less too. This was really apparent in the boss right spawn phase if trying to take out the gunners one by one. It was pretty much impossible to try to create the 2x3 with other gunners constantly barraging the blocks (or you) with their shots. The bullets could also be a lot slower so you could maybe actually try to dodge instead of just being on full running speed and hoping for the best. The placing of blocks was super hard and inaccurate if trying to do from running speed.

Thee melee mode of the boss was bit too relentless too. Pretty much had to trap her due to dumb AI and then use the static blocks to whack her. Not the greatest of feelings if the only/best strategy feels like cheese. And oh my god getting stuck on the walls, that was horrible. Are the walls made out of glue or something?

Of course this would make the boss fight a lot easier. Actually probably more in line with the rest of the game. Obviously there are loads of other ways you could then increase the difficulty back but would feel better, be less annoying and reliant on luck. Generally the boss fight was pretty well designed but just would need some ironing out of kinks and overall balancing.

The hold mechanic was quite pointless. There was never really time to use it properly. And even the next preview was quite useless since you couldn't really focus on that either. Dash felt really underused and out of place. Feels like it was just slapped there because other games have one. Should have focused more on the main mechanic of tetriminos instead of offering distractions from it like the dash.

Anyways, good job! Sweet idea and with some more polish the game could be flawless too.

I had the chance to come back and play your game all the way through (What a wild boss fight, but the crown belongs to me). I thought the idea for this game was incredibly intuitive and excellent in execution. I truly love anything that has to do with Tetris and this was an amazing use of the possibilities that Tetris give you.

I did notice the collision issue on the walls where I would slow down significantly. I took a peek at the source code and saw move_and_collide. I would recommend changing to move_and_slide, which usually fixes that problem for me, you just have to pump the speed up a little for that method. It wasn’t a huge problem, but I was able to use it to cheese the chickens and first boss stage a little since they had the same slow down when colliding with a wall.

I’m curious what the combat would feel like if the pieces spawned as soon as I clicked and lasted like half a second longer. I constantly felt like I was “just” missing a killing combo and then I was on the move again. The reason I say spawn instantly is because I relied on dodging bullets more than blocking them because of the block spawn time.

Overall one of my favorite games in this jam and a joy to play and finish. It’s incredibly well polished with even some elements of level randomization (where the hat is, where the stairs are), and that was a pleasant surprise. I enjoyed the music and the sounds and found the challenge refreshing. I truly think it has a lot of potential to grow in the future. Great job!

Really nice concept that was well executed. I feel like the blocks tended to disappear too fast, and the collisions on corner were not as smooth as they could have been (I was blocked multiple times on a corner), but it didn't reduce my enjoyment of the game.

Well that was interesting. The levels were pretty easy for me. The only part were I struggled was on the level before the boss fight towards the end. Seems theres no way past without taking some damage?

Epic boss fight though. Really neat concept actually. Not something I would have ever thought of. +1 for tetris too :D

EDIT: Forgot to add that the music was really hard to stomach. Really wish there was a way to turn off the lag there.

I found the puzzles very amusing so I was engaged with it from the beginning. The tutorial was a great point that made the game-play even more engaging.

Just to be a bit constructive: The levels were a bit long to be replayed completely, perhaps shorter challenges at the beginning to learn the dynamics could have improved the engagement. Also I would have appreciated that the camera partially follows the mouse so you can visualize better the challenges on the bottom with the UI there it was hard for me to see gunners and other things there.

Anyway you have my score. Great job!

Really unique gameplay mechanic which unfortunately, I'm awful at, because I've always been bad at Tetris. But! I still enjoyed myself. Presentation was lovely, nice clear tutorial, everything was very smooth. I can see this expanding into something bigger.

This is one of the best games I've played in the jam, even if I found it pretty hard!

For some reason it took me a while to realize you need to just spawn unwanted tetronimos, I assumed there was a button to move to the next one. Once I got that, it was pretty easy to control.

The design of using tetronimos feels really good, it's a really good idea I haven't seen done before.

But I found it quite hard! I feel like having some more basic challenges at the start without enemies would let people get to learn the game easier.

I really like the art and it feels polished without being too animated, which is what a lot of games fall back on. It's stylish which I like.

Overall, this is in the top #3 in the games I've played so far. Good job, and I'd like to see more of it.

Good concept! Found the controls difficult at the start, got a bit better once played for a few minutes.