An arcade action game, made in 48 hours for Mizjam
Submitted by Let's Talk Game Design (@ZayneDoesThings) — 1 day, 8 hours before the deadline
Add to collection 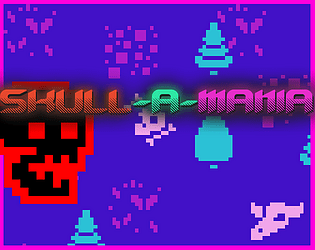 Awesome! It's a very simple idea that's supported by everything else in the game and works wonderfully. Nothing to criticize. Also I loke the music choice, it's not something you would associate to a game like this one, but it fits perfectly. Well done!

Wow, this is a really excellent game! This is one of those games where it's so well developed, that I'm just filled to the brim with ideas on how to improve on the extremely winning formula, rather than just a quiet enjoyment. As such, I'm probably about to brain dump some stuff that went through my head while I was playing, but I don't want it to come across as me complaining or criticizing the game to pieces, this is just me excitedly blathering on about all the possibilities for such an already wonderful game!

Preamble aside...
It seemed like the only /real/ threat was the archers. When I adopted a strategy of conserve "nom" an eliminate archers first, I had a lot more success - but that's also not the most fun way to play. I think the other units need to be more of a threat.
When the projectiles spawn /right/ before I'm about to eat a dude, it feels kinda unfair for the player. I was thinking having some sort of "aura of fear" that prevents attacks from people right next to you might ensure that the player always feels it's their own fault when they die, rather than going "oh that's bullshit"
The "nom" bar running out of steam is important for balance, but also it slightly encourages a more hesitant gameplay pattern - where the player doesn't want to run out of steam and crash and die - so they play a bit more conservatively, however the game is definitely at its best when you're just going NUTS trying to eat dudes. I'm thinking maybe having even more enemy fodder might fix that, since you'll basically always have some juice nearby to keep going, but I'm not 100% sure on that solution.
There's some potential for more spells that the skull head guy could use, rather than just straight up nomming, to try and keep the player super engaged and switching up strategy and playstyle. Maybe an aoe vacuum burst to pull enemies in - leave yourself vulnerable for a moment, but if you land it, you can then perform some high tier nomming.

I feel like I could talk about this game for hours - incredible work. I absolutely love this entry. 5 stars all around.

Beat the game on normal, sweet! I don't hate myself enough to try nightmare. I like the disco aesthetic and the music. Game definitely had a lot of style. It was satisfying to play because of the death sequences, and what I at first thought was an easy baby game turned into a really fun bullet hell game when you introduced the archers.

I think I ran into a bug where an archer shot at me out of cycle, which felt bad. Also for me the combination of wizards and archers was much more difficult than purely wizard, so I feel like the wizard introduction level should be swapped with the one after it to keep a consistent difficulty curve.

Submitted
You are [UN] Dead, Enjoy Your Stay
LikeReply
EdalbungSubmitted2 years ago

I liked a lot the nervous gameplay of Skull-A-Mania!

The music and sound feedbacks are really good, and it goes the same for the art assets usage.

I found that sometimes it was imprecise on the colliders, indeed, occasionally I thought that I didn't collide with the dangerous element, but I was wrong and I died.

Cool game! I watched your devlog and it was really interesting to see how the game started out and where it ended up, you will go far with your channel no doubt! I love the idea of being the enemy in a game, I think that should be explored further

Thanks! I really enjoyed making it. Learned a lot. But you know that, because you've watched the video. :D

its very fun to chain kills together to clear the room as fast as possible , it reminded me of hotline miami , I think this would work amazingly in an endless mode where waves of enemies spawn , if you had lets say 10 hitpoints , just an idea tho

this gets a high rating , very engaging , looks great and is well polished , great job

Thank you so much! I think going forward it could do with some variations, but I'd definitely put in the endless mode, absolutely.

It’s a solid bullet-hell style game with cool effects, very groovy, which helped get me into the flow of the game. I like that the meter replenishes so I can go on a rampage killing everything in sight. The instant respawn is also very much appreciated in these kinds of games, because I die a lot. It was quite engaging, I was on my toes trying to dodge spikes, arrows and mage balls. I beat the game but I don’t think I’ll be able to do the Nightmare levels seeing that the base levels were already quite challenging. I feel that it would be more interesting if there were more game mechanics rather than just holding Shift. All in all, great work!

I'm glad there was a good gameplay flow, I was really hoping to get into that 'flow state' where you're just kinda bouncing around doing awesome stuff. Thank you!