Loop around the track and hit the laser as many as you can.
Submitted by Vsio NeithR (@vsioneithr) — 22 hours, 35 minutes before the deadline
Add to collection 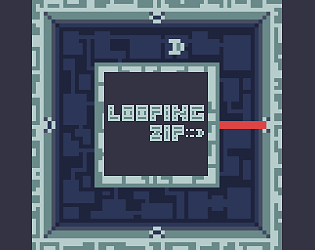 Nice graphics and sound. I like the concept, but I was expecting the the difficulty to increase. Without that, the game only kept me interested for a few tries. If it would have some kind of non trivial difficulty progression that would keep me interested longer and would encourage me to retry. Mostly because I would want to see how the difficulty changes and if I am up to the challenge.

Nice idea, kind of hard, it makes me keep playing

I remember when that time I didn't add the detail when the game is in progress.

With keyboard, the difficulty can be lowered ;).

Also, thanks to the who created the music that I can make the game better ;).

About the main menu, someone else addressed it too. I guess I will probably make the play button bigger to make the GUI more intuitive in the future update :).

My complaint is that it gets hard fast then it doesn't seem to get more harder. But at the final speed you can die easily. Fair enough!

I like the visuals, the music add a lot to it. The sounds are good too. And the game is addictive!

Submitted
YAZG - Yet Another Zombie Game
LikeReply
Jupiter_Hadley6 years ago

Fun, challenging, nice game. I included it in my compilation video series of the Low Rez Jam games, if you would like to take a look :)

Really nice little game. Gets very hard fast, controls couldn't be simpler, and the retro graphics are cool too. The main menu took a few seconds of poking things to understand what did what. But the game itself is indeed cool, fun to play, and the graphics/music are nice as well.

Wow, it seems so simple but it's incredibly challenging! Nice job! =D

Great work here. I love the attention to detail, great use of the tiny space.

Fun! and pretty addicting, i like how quick it is

Thank you for the feedback! I got inspired from "Easy to learn, hard to master" game. Also about the "started" phase, I will think about it to change it to avoid confusion in the future :).

Thank you for the rating and feedback! :)