Thank you very much for playing the game 🙏🙏🙏

Congratulation! Keep it up to the deepest level ;-)

Sure, one day after I am better at animating : ).

Thanks for the suggestion! : )

Whoops sorry, there will be delay for the halloween variant update.

Been doing well in making fan art that I forgot to do update. My bad, my bad. hahah.

But here some peek: 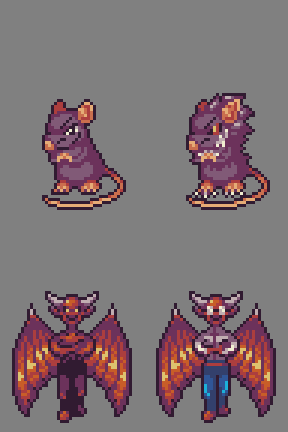 Yes agreed. I will relax with mine though. So, it is optional but very appreciated :3.

Also, I changed the license again so it is optional to credit me, which I forgot to change earlier to that after I released the new Dot Battler Pack asset :3.

Completed the game with all golden radish :D.

Also, love the subtly next level after finishing the boss ;).

Nice short game and the mystery.

I finally doomed the world :D.

Finally got conscious, but will the Roomba stay as Roomba when it is conscious? ;)

Finally sent that Melvin to detention.
I enjoyed the game. I even played it again from beginning to see the response of the dialogue :D.

Also there was a bug after choosing choice dialogue with Gilbert, the choice appeared again in next dialogue.

Other than that, great job.

I love the lonely atmosphere.

Glad they fit perfectly in your game. :)

Thanks everyone for the replies.

Now I can more safely edit my page. Can't stand with the current plain page.

Is it okay to update the game page after deadline?

The game itself already uploaded into the page.
However, the page is still plain and I am planning to update it after done submission deadline.

Me too, when I see this game again, I am inspired to make another game like this again.

Nice concept that player plays as zombie killing the remaining humans. I can only managed to reach level 8 with 3 stars rating.

My only problem is that choosing zombie can only be done from previous levels and some level seems need certain zombie to get 3 stars rating. I had to go back to level 2 just to to be able to choose the 4th (to break the woods on the door) and 5th zombie (to take down human above building) which seems some levels require those zombies. Good luck if you planning to update it :-).

Also good job and hello there from fellow 1GAM participant. Good luck for reaching 1 game for each month if you are into the challenge ;-).

Got 15. This is a creative clone. It is also interesting the player also need to watch the bird position as the picked up bird position will affect the difficulty.

I know that struggle C:.

I wonder what the bus is thinking right now... lol

Beat all the levels. Gameplay was fun even for a game made in 7 hours. Also, I like the drowning sound.

Also, in customization, the number index can be negative.

Might try to add the moving pipe obstacles to make it more different than usual flappy bird clone.

Good game. It will be more fun to be able to mix element. Sound also will be nice too.

After playing a while the game music will stop playing until game over.

This game is fun if you understand how to handle to obstacles.

Also, sound effect would be nice too.

I love gameplay with the permanent upgrade.

Also, I made it to the end with the bottom choice with character who had the lowest HP and high damage.

Cool game, only need the AI left since I often play single player.

Nice use of few colors.

The game also has potential. Good luck in the future update ;).

Love the art style and the color.

Also, would be nice to have different music for each world (I, II, III, etc).

The game has really good potential for post-jam update.

Also, I like to set my E below 30 since it recovers faster.

Those collection of minigames are simple, great, and fun :).

About the "Stop" minigames, sometimes the goal area was positioned after the player's square position, making a time to reach very harder.

An alternate if you can't harm the real one :D.

Also, like other said, the Newgrounds badge notification break the 64x64 screen resolution. I think the Newgrounds API has function (or field?) to check whether the site is played in Newgrounds or not. That way, it is possible to distribute it in the jam and NG with single compile without breaking the 64x64 rule ;).

Also, gonna get all your medals in NG as soon I go back there :).

Also, about the control at main menu. Since player doesn't have to use mouse anymore after main menu, it is better to replace it with keyboard to make less control required to interact with the game.