A color matching game with a distinct sound ambience
Submitted by jernej, Snejk — 7 hours, 23 minutes before the deadline
Add to collection 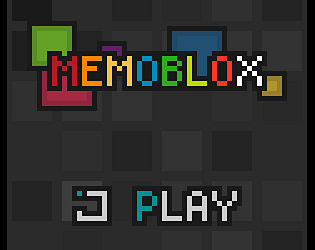 Challenging, well made game! I included it in my compilation video series of the Low Rez Jam games, if you would like to take a look :)

I like this kind of game, 64x64 cool version, well done

Great concept. Could totally see it being a sleeper hit on mobile, like Blendoku. go that route.

Took me a while to notice that the tiles should be connected :p

Thanks for the feedback. Really good and valid points.

@greysonp: I would love to polish the color palettes even further and I was thinking to swap middle levels with the current end game levels (double colored squares) but for that I needed more feedback from other players (since for me the game became quite easy due to all the testing I did during the development). I want the game to ramp in difficulty as you progress through the levels, but if you experienced those problems in the first 4 levels, I have to address it.

@stuartlangridge: Yes, I think something minimalistic would do the trick. We've been thinking about that, but then decided to test how it would do without written instructions. Something to keep in mind if it turns out that many players have a problem figuring this out.

Very cool! One suggestion I have is that when memorizing the colors, sometimes on the grid screen there are many colors similar to those I memorized. And those colors may be right next to each other, meaning I can't deduce which one was correct (both would make a valid path). I feel like my eyesight is being tested less than my memory. Maybe stick to a distinct color palette?

The skull and its laugh makes me laugh in turn. I didn't really realise that I was supposed to be remembering the colours until after the first playthrough; maybe some minimal instructions, or a slide saying "REMEMBER" before the colours start?

Submitted
Have you seen this image?
LikeReply