A short platformer about, well, just another day.
Submitted by sharpfives (@sharpfives) — 11 hours, 15 minutes before the deadline
Add to collection 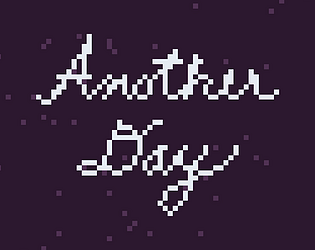 Did you work in a team?
All code/art/music by Alex (@sharpfives). Some sound effects from www.freesound.org

Was the resolution a challenge?
Nope! Love making stuff at 64x64 resolution.

Amazing as usual! Love the story telling and how it evolves in a series of unexpected turns. The animations are on point. I did hit the bug where it freezes but the fact I could pick it up where I left off was super handy. Very nice work!

Enchanting. I didn't understand what a couple of the symbols were to begin with but it really didn't matter as it soon became clear. Top marks from me.

Love everything in this game. Such a calm but complete experience. Now I can't have enough of your soundtrack, is there any way to download/buy/stream it?

It's a minimalist, calming game~ The visuals, music, and sound work together perfectly as you work through it. It's quite remarkable to see this sort of feeling communicated with such a small resolution- a very special entry!

one of my favs so far! great sound and amazing art! fantastic job overall!

Simple. By every definition of the word, this game is simple.

The palette is clean. The visuals and overall aesthetic are perfectly minimized and easy on the eyes. The art style fits beautifully in the tiny 64 by 64 canvas, and every motion, from the fast paced, loaded cut scenes to the short, sweet player animations of walking up stairs, opening doors, or sitting down, feels so right in my eyes and perfect on the minuscule canvas with its serene colors. But most of all, it feels simple. Each and every object has been stripped to its core blocks of color: a tree is but a shade of wood and a shade of leaf. The solitary moon sits in the sky, and blocked clouds cross over it. The ground is a single line of uninterrupted pixels. Many objects in the game have less pixels than I have fingers, and from what I could tell, the scenes themselves had less colors than I have fingers on a single hand. Unnecessary details removed in the game unearthed a tranquil atmosphere, a calming environment where only the bare minimum is there. Mere simple shapes and lines across a single colored canvas sky. But these shapes and lines are so artfully placed, drawn, and designed as to be immediately recognizable, in as few as a single color. Its simple and it just works.

Almost everything the player does in this game is simple. Of course, launching a rocket or fixing a leaky roof are by no means menial, everyday tasks, but Another Day makes them just that: another day's worth of little things. Each task is crossed off when completed with a satisfying check, and the clear linearity of the levels guides us in a simple direction, ever on wards towards the next part of our day. The player is left with few choices, and simply moves forward, but by no means is this quest made boring or dull. We hunt out mandatory items and backtrack when necessary, and each little task builds up to each level's final completion. But Another Day's quests never lose their charming simplicity: from helping baby birds find their mother to picking up coffee for the receptionist.

But the best part of Another Day is when it breaks its rule of self imposed simplicity. It begins right away with the wild, frenetic intro cut scene. We're thrown into a strange world with many things unfolding before our eyes and uneasy sounds playing non stop. They play and play until all of sudden, it stops, and our simple day begins. At least on me, this raw juxtaposition was lost as I fell prey to the calming, easy overtones of the game, from the aforementioned palette, art style, and simple initial tasks. And again, Another Day's best parts come from breaking its own rules. The charm comes from doing tasks that are so everyday and common but so uncommon at the same time. We see birds and at times their offspring constantly throughout our lives, and even at young ages children can discern and identify the caws and songs of the winged animals. Yet birds oft go unnoticed, and I would hazard a guess many of us have never helped young birds find their mothers. These two key elements of the task, the simplicity and everyday half and the fantastical context, collide with one another and form something so preposterous and crazy, it would be absolutely impossible for it to be just another day in our lives. The same with applies to pretty much every task in the game, especially building a rocket: many of the people playing this game are employed, perhaps even programmers, and are familiar with an office setting, coffee, and working on a computer amidst others. Yet, being a member of a team sending a rocket into space is an incredibly rare position. Its a harsh juxtaposition that seems like it would throw us off, but the charm and simplicity of the entire package reel us back in to tranquility, to the peacefulness we found after the intro cutscene.\

I could honestly go on and continue my incessant ramblings non stop on many other facets of this game, from its sound to its progression, but I'll touch on one last thing. After the rocket is fired and we go through another intense, action packed cut scene, the sound cuts out once more and we're back where we were, at the top of the ladder, having just launched the rocket. Its more quiet now, serene even. But that's not the important part. Standing there, task complete, I knew exactly where to go, and for once in the game, it wasn't forward towards the next goal. There was no next goal. All we do now is head home. Just like the protagonist in the hero's journey archetype, we trudge backwards, back and back past the little sights and scenes we'd already seen, back on the bus which ferried us to work, past the park, into the building, following the labyrinthine routes of staircases and doors that had somehow become so familiar, and entering the bed. From the moment the cutscene ended, I just knew the next and final step was to return home and sleep. And why wouldn't we:  at the end of everyday, every person turns to their bed and rests. And so must we, guiding the player home. The addition of this last task, for once without an empty check box or prompt, was so simple, and yet so profound and important to the game, making it feel whole, and truly like just Another Day.

Wow, thank you so much for the kind review! :)

Really liked the game.  I thought the minimalistic art style and the limited color palettes looked great and paired nicely with the music.

Pretty great tiny experience, usually not my kind of game but I couldn't stop until I finished it.  What engine did you use to make it?

I just cannot love the animation more… so smooth and … organic? Palette wise the choices are very particular but really nice. A great entry, also the story is quite charming. Can I keep one of the little birds? please… :P

Just beautiful Alex. Love the simple but rich environments. Music is so soothing.

So much emotion and aesthetic in such few pixels, excellent work.

I love the style of this game. It was a fun story and experience. And I like the cutscenes too!

Amazing what you can do with so little. No fancy pixel art, but we still understand everything, it’s very well done!

Wow what a day and what an experience :) I really like your game, the design is absolutely amazing, this simplistic style in combination with the music creates a great atmosphere. And the animations are gorgeous! It is such a great thing that you can refresh the page without losing any progress, I can only guess how much work you must have put into this project :) Overall you did a very great job and I am super happy that I've played your game, thank you so much for sharing it!

I got stuck cuz I really didn't know what to do with the birds. Otherwise, nice game. Love the aesthetic.

once you have all three, take them to their momma :)

Wow, the pixel art and audio design here are astonishing. Everything comes together to be so expressive and clear. The counterpoint between such abstract and minimalist visuals to the precise audio is really cool.