Remember you sometimes have to pick floor tiles to drop them on another place, just like the 1st level. In fact I'll get rid of this on future versions because it's a useless complication to the game, but anyway, here's the solution: 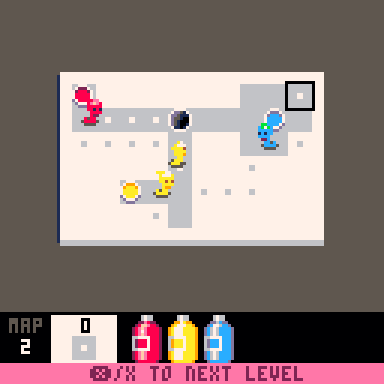 Fantastic game! Finished it many times (my tip: keep pressing the shoot button), and I love the music too, playing it at times on my synths. Glad you posted it on itch.io, now I can buy it ;)

I can't see any Requirements section, here's how this page looks like to me (there's nothing more after the comments section): 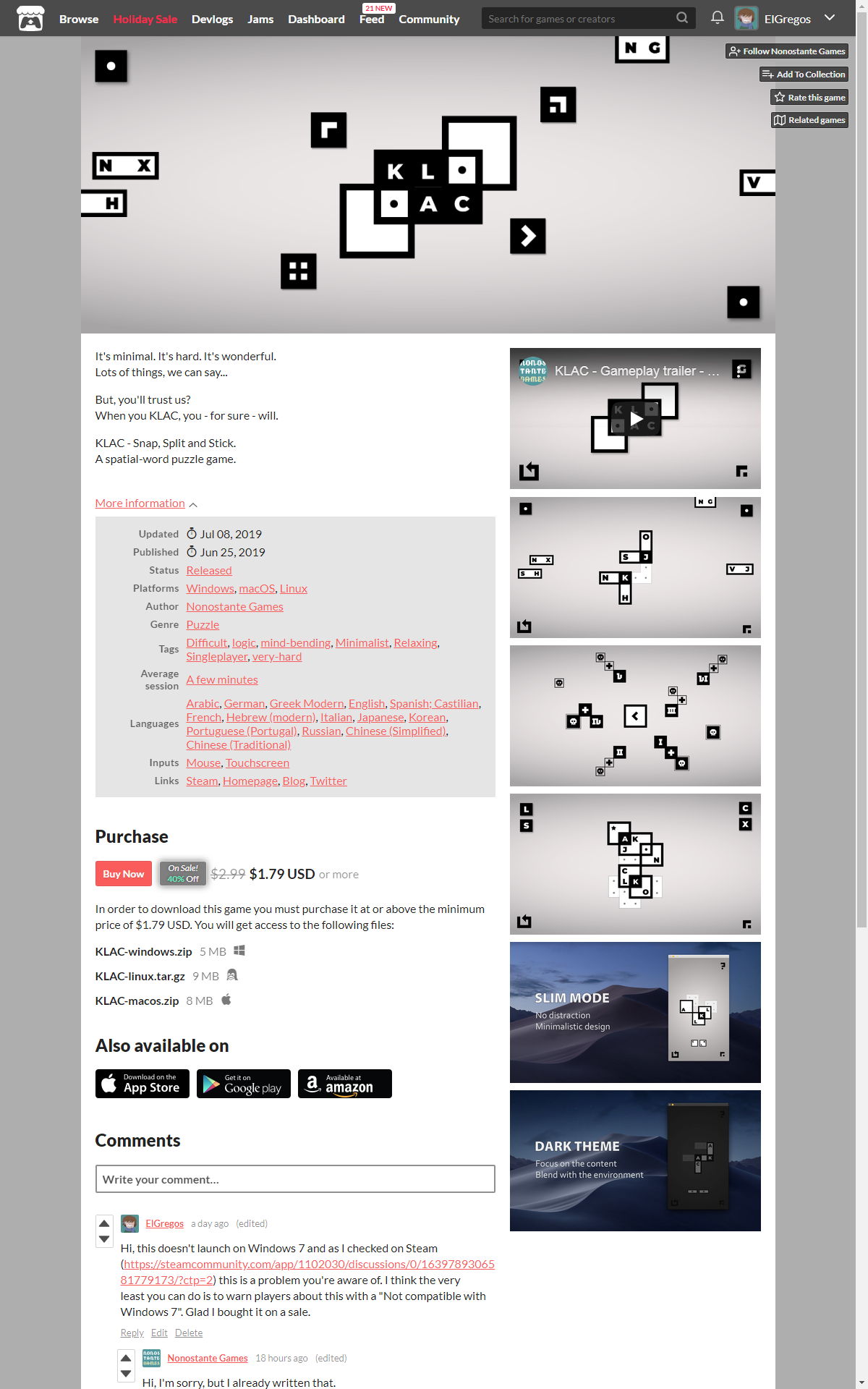 Btw I had a refund so don't worry about that.

I posted here as I bought your game here, on itch.io, where I indeed can't see any requirement. I don't mean to be picky, but asking customers to check requirements on external stores is a bit of a stretch. I still think you should put a warning here about the game not working on Windows 7.

Absolutely lovely game! Reached the end with 8/9 coins, and a smile on my face all along :). That cute tune was a perfect fit too, thanks kittenm4ster!

HI! Cute game, got all diamonds! I'm wondering whether there's a way to get out of the house now though, or if the game just ends with you trapped inside. I got the torchlight, key, record and mittens+scarf+hat, but nothing will let me open that entrance door.

Sorry, I've not obfuscated it but coded this way :)

Thanks! Played it quite often on Amiga back then, it was a lot of fun to play solo or with another player. And to squeeze into 560 chars too ;) !

Reply
TweetTweetJam 2 community · Posted in Could Game Maker be used?
ElGregos1 year ago

Hi, this needs to be confirmed by eggnong but I guess GameMaker is ok, as long as the code stands in the 560 chars limit so that any GM owner can just copy & paste your code and get the intended game.

The ability to respawn on closest checkpoint has to be activated ingame. Maybe you haven't found the right function yet ;)

Hey, thanks! I just managed to go to level 10, and now it starts getting REALLY difficult! :D

Well done! I'm not very good at his game neither :D

I'm both glad you liked it and, erh, sorry you found it frustrating :]. I agree with you about the lack of sound, but I blocked on the "sound should be chiptune" rule, as I could not see that kind of music fit my game. Making the game in 3 days didn't help neither. About precision, yep there's an issue here I tried to arrange by defining sliders steps for each screen, but it sure can use some more tuning. But I have some ideas for the future!

Never heard of Simian Interface, but I just checked and now I want to play it!

Looks promising but I couldn't play it (so I didn't rate the game) as I'm french, and doomed with WASD games which can't be played on our azerty keyboards. I guess that malediction will go on as long as devs keep ignoring arrow keys ;)

That was absolutely refreshing! It was like a childhood afternoon in the park with some friends. I like your take on the minimalistic theme: proposing just a few tools to play with, just as kids can have fun for hours just with a stick, a ball and a cord. Great work on sound too, and well chosen colors. Oh, fwiw, I found a bug where I got stucked against the iceman cart. Relaunched the game and stayed away from that sticky cart!

Cute game! I love that kind of puzzle games. I'm amazed at the music too, you managed to make one for each level and that sure fells more polished. Reminded me some shareware games on Amiga too ;)

This game can quickly become addictive. I like the art, though imo the line work doesn't totally fit with minimalism (it should either be off or a lot bolder). Nevertheless it's quite a fun and polished game.

God that game is hard! Or more honestly, god I'm bad at this! I managed to finish some 3 colors levels then my ability to focus AND keep the mouse ahead of the snake-like form was lost. Really good idea and excellent execution tho!

Nice game! Love the punchy sounds too. At first I thought only notes sequence matters, but keeping rhythm sure increases score! I join other players suggestion about shortening repetition before difficulty progression (like you said, 2 instead of 5 should do well).

Hey, thanks Paul! You're talking about those black horizontal bars I guess? Yeah this one is tricky, so here's a hint: thare are two horizontal ways for bars, but only one makes the screen doable. It might be better placed near the end, for difficulty progression. There's another player who managed to complete it but couldn't do it at first as she got it wrong and tried to follow the yellow bars... while the bars are black on yellow! Which is indeed an easy error to make, I didn't think about that.

Wow, thank you! This is so heartwarming, I'm very glad (and proud) you liked the game!

Thank you so much! I liked making it too, have done several jams before and this one was really focused and straightforward for me. Glad you like it!

Thanks! I too thought about being not too strict with the solutions, so I tuned each step (the sliders increment) so that the differences would be noticeable. Maybe it's still too strict, and that might call for difficulty settings for a post jam!

Thank you! I think the game would be too easy with labels, and they would add unnecessary weight on visuals I wanted to be as simple as possible. I thought it would have been a nice addition to let players add their own labels tho, but I missed time! Or perhaps show some cryptic acronyms...

Thank you! In case you missed some hints in-game (which can easily be done :D) you can press left & right keys after you clicked on a slider to be more precise. Wuld love to make a better scheme, but you know, jam time limitations... And I'm now checking your GDWC website for sure!

Thank you! The "take the most of the less" is an approach I like a lot.

Thanks! Indeed there's matter for more, perhaps in a post-jam version?

Thanks Dja! I was driven by that minimalist aesthetic and what can be done by some really simple shapes (just a bunch of html divs and text) and a set of simple controls. Glad you liked it! 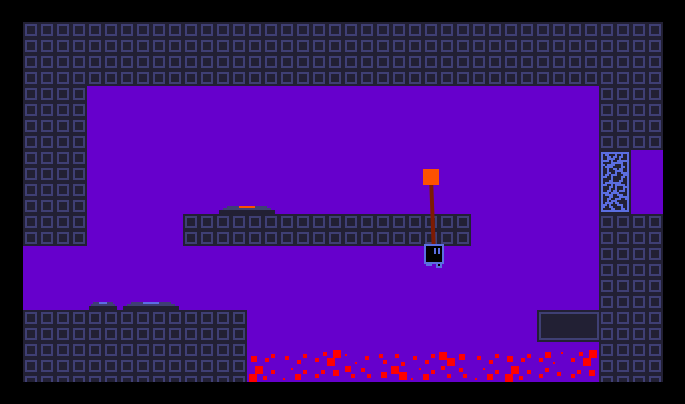 Wish there was a way to break the cord :D

Thanks Hyper! You're absolutely right about the music, but I couldn't imagine a music fitting the game feel , as the jam rules stated the music should sound like chiptune. Plus, no music meant more time for the game!

As I understand it, the "No anti-aliasing" part is mostly to prevent pixel-artists to "cheat" with their pixels, as anti-aliasing is then quite visible and spoils the purity of minimalism. But what if anti-aliasing is a native part of the graphic engine, is barely visible, and needs extra efforts to get rid of? Isn't forbidding this natural behaviour the opposite of the minimalism spirit? I'm particularly planning making a Javascript game, with divs or svg, which the browser engine usually anti-aliases, but on a barely noticeable way. Is such a game allowed?

I played this game in 2 sessions for, I'd say, a total of 3 hours. I just finished it, and it left me with an urge to open my wallet, which doesn't happen that often for a "Pay what you want" game, esp. made for a jam:

However, there are things I wish were made otherwise:

But I'm not complaining, again it's a jam game and the work done in 2 weeks is absolutely amazing.

Hey, thanks, that's very kind of you!

The difficulty ramps up quite quickly indeed, although you can skip any level with Enter key. I wish I had more time for more progressive levels.

Oh yeah, that was a nice and cool little game! Exactly the kind of small but complete Pico-8 game I'd like to make more often. Fun to play and I'm sure it was fun to make.

Thanks for your playthrough Heinrich. Your reaction at 20:50 really made my day! :D

Indeed arrow keys are working, great! At last I could enjoy your game, excellent visuals and sound, love the small scope perfectly fitting the jam. It's fun, and my kind of difficulty: first try was a mess, then I could make it once I understood what to do. Didn't feel the need for a tutorial. Sure it cries for a post jam version with more levels ;). Good game with simple concept and solid gameplay, and again the art is what really sells it. Really love the palette and simple, very legible graphics, as well as the tunes and sfx.

Pleaaaase make your post jam version playable on non qwerty keyboards, i.e. with arrow keys or even esdf. It looks like a cool game, but I can't play it.  : )

Well, the plan was to develop all of them, until gamejam remaining time called for being more realistic. :D Many other ideas couldn't make it neither, such as RAM and CPU use that are still hinted in functions. I'm happy you liked the game anyway, thanks!