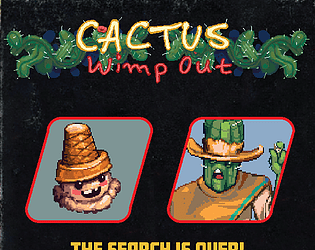 Ranked from 67 ratings. Score is adjusted from raw score by the median number of ratings per game in the jam.

How does your game fit the theme?
The game is about rolling dice to deal damage to enemies

The art is delicious. That shading and creativity is insane. In the future, I'd be amazing to see more animated sprites, to give more life to the game and the dice system could be introduced with a nice tutorial that shows you step by step how it works, but for the jam, this game is amazing, really loved it.

Thank you so much! Currently working on bug fixes and a tutorial I can’t wait for the voting period to end so I can upload it :)

Damn, the art on this game is gorgeous, good job! I found the system a tad confusing at first but in the end I enjoyed the experience!

High praise! Thank you so much for the kind words about the art.

Glad the game made sense after a bit.

Great game! I enjoy this game, Impressive game in such a short time. Great job!

Feel free to check my game if you want to challange your brain muscle!

Cool concept and theme implementation! The graphics are very nice as well!

I love it, but I'm not sure the scoring system works correctly. After locking dice I feel like new one I roll won't have an effect on old one. Like I add 5 sixs, rolled an other one and was still zonked.
The game seemed to have return to the welcome screen on its own. Or maybe I died and didn't realize but I feel like I had a bunch of life left. (and when i relaunch the game the music (wich is incredible) booted a second time on top

PS: I love the credit sections too ♥

There are some scoring bugs but what you mentioned is intentional. The scoring is based off a traditional dice game called farkle in which the dice from previous rolls don’t stack with your current roll. The game could do a better job explaining that (among other things) thank you for playing though :)

Hello! Thanks a lot for your comment about the music! It’s the first time I scored for a game jam, and I’m glad to receive positive feedback! ❤️

Love the art and idea!

Such amazing artwork. Took a minute to get going, but was fun to get the allies. A prompt like "pick your dice" could help make the stages clearer from the start, but is still pretty quick to pick up

Great game! I loved the amazing artwork and the interesting take on the theme!

great job on this! It's a cool concept and I had a good time playing it.
I miss more options for "partners", but I think it's already a good scope for the jam time frame.

Check out the dev log for one friend that didn't make it. There were a few more that didn't get past concepts.

Thank you for playing and glad you enjoyed it! Means a lot.

I think the game would gain a lot from making the numbers flash and scale as they get updated to draw the player's attention. Right now the game screen is very static. Adding a flash and some squash to the character getting damaged would make it visually clear which character gets damaged and would make the game look less static.

The friends / assisting characters stack and there's a UI bug where you see two of the buddy texts at the same time if the mouse hovers above both where their sprites overlap.

The art is very nice but you have different pixel scaling for the assets which make the game look like a mash-up of unrelated assets. Having a uniform pixel scale for all assets would've made the game look a lot more polished and cohesive.

Artist did a great job on the sprites.

It's an interesting idea and I like the aesthetic. I was a bit confused on the gameplay, like for example I couldn't understand why I wouldn't just click all dice and then attack each turn.

We also went for a Western fighting-themed game, so it's cool to see how the ideas differ!

Yeah selecting them all is an exploit that I didn't realize you could do until after we submitted haha. You're supposed to only be able to select dice which add to your score. As for attacking every turn, you can do a lot more damage per turn by re throwing your unselected dice.

took a while to figure out how to play. Nice game when you figure it out. Very cool graphics and music!

I've got nothing really to add, apart from I wholly agree with Vitor G.'s comment below. Otherwise, your art is BEAUTIFUL, like, amazing, well done on finishing this game!! :)

Hey pretty cool game! Was making me think of Yhatzee! I bet a full blown yhatzee battle game would do pretty well...

I loved all your page descriptions and the overall tone of the game! Very amusing! The game itself was cool, though I wish a little bit more was told in the game itself (I didn't read the full game's page till after). I figured it out eventually though and I got to about enemy 6 or 7 before my cactus died. I loved the design of the characters and your allies/enemies.

One bug I noticed is when I lost and the game started up again, the audio started playing over the original audio so the song was going twice. Not super pleasant.

Overall all very enjoyable! Good work on this!!

Thank you for the kind words. We've been discussing bug fixes and where we can go with a project like this. We might make some changes and bring in cut content.

Thanks for playing our game and getting so far in it.

While the visuals are nice, the gameplay aspect feels rushed. Why would you select a combination of dices when you can select all of them? There's no strategy! The game's also really glitchy, as an example, if you die and press the button to play again the music repeats, this happens every time you die by the way. The song can get quite annoying after a while aswell.

Selecting them all is an exploit that I didn't realize you could do until after we submitted haha. You're supposed to only be able to select dice which add to your score.

Sorry if I sounded harsh, it wasn't my intention.

Pretty cool game. Loved the art and the song.

I liked how to get high damage you had to match certain rules, almost like poker. However, I didn't really see the point of selecting which dice to use, when selecting all of them was always the best option.

Selecting them all is an exploit that I didn't realize you could do until after we submitted haha. You're supposed to only be able to select dice which add to your score. I appreciate the nice comment <3

Thanks for showing love to the song! Glad you liked it :)

It was really catchy :)

Stunning visuals!! The tiny pumpkin eye moving around is awesome :D
I'm very curious if the story in the description is actually true, and how you guys managed to coordinate this massive team haha