When you move, gravity changes direction. Chaos ensues.
Submitted by jermrellum — 6 hours, 29 minutes before the deadline
Add to collection 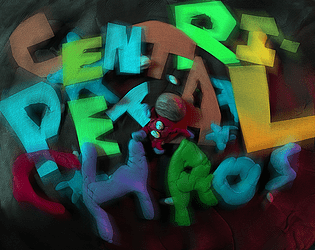 How does your game fit the theme?
Moving causes gravity to accelerate, making the game spin out of control fast.

I never really reached a point where I felt like I had any intuitive understanding of how to control the game! I "got" the rules after a level or two, but even then I never really became proficient. The best trick I found was to use the glitchy physics to stick to walls until rotation was at the correct angle. I definitely felt out of control.

Oh, I loved the level where you go outside the level. That was great. (Still sickening/dizzying lol)

Very out of control! It seems that the player character exerts a force on the world  that makes it very difficult to change rotation while it's colliding with the walls, there might be some mass/friction settings you could mess with to improve the responsiveness.

I quite liked when the levels weren't enclosed and you had to freefall around the outside of the level.

I might also try making the character always facing upright with respect to gravity, it might be nice to have one point of consistency.

The game was certainly was chaotic & out of control, and at some point mind-bending too.

I loved the game's claymation visual style, it was very unique when almost all of the entries (including mine) had pixelart because of several reasons, mainly the time spent on compared to other styles. So considering that, this entry in term of visuals is impressive!

Another thing that I've also noticed was that in some level you have to go 'out of bounds' and around the walls, that was mindbending for me, since I'd expect the areas out of the bounds (aka the areas without the 'walls' placed in) would be lethal & should be avoided in the most games.

Meanwhile, when it comes to controlling the game, I was not exactly sure how the rotation mechanics worked in the game and would either rotate the screen too much or not rotate it at all. I think making it clear when you're in control of rotating the screen would help it a lot to make the gameplay more intuitive.

Either way, I think this idea of both controlling the character and the gravity fits in the jam's theme 'out of control' very well.

I love the music, and the visuals are pretty great; I especially like the background art. It is a little hard to tell what's going on, to the point where I wasn't always sure whether or not I was in control. Which is the point of the prompt, so well done!

Cool idea, and great visuals! I did find it a bit vomit inducing and couldnt really work out how or why it would suddenly spin out or how to get control back.

The idea is cool, and the levels are well designed, too!

A really cool idea and definitely out of control!

A neat idea, but spins way too fast. Gave me motion sickness headache in less than 10s.

Really interesting idea, but I would have toned down how much the level spins, or cap it at a certain speed - that really hinders its re-playability.

Submitted
Out of Time
LikeReply
jermrellumDeveloper1 year ago(+1)

Well, it actually is capped at 10pi/3 radians/second (600 degrees), but yeah, perhaps a lower cap would cause less motion sickness.

I have a version of the game where spin can be turned off by pressing O on my own site: http://notthefuture.com/centripetal/

It does make the game quite a bit more confusing, but you'll get less motion sickness at least.

Japser's comment above also inspired me to see what happens when you turn off terminal angular velocity.  It's neat!  There's a bunch of geometric designs, then ghostly versions of the character appear, before eventually you're spinning so fast that everything returns to normal (but really what's happening is you're now moving 360 degrees each frame).  If you go to my site you can just right click -> inspect to activate the console (press Esc if the console isn't there), then type in "gaTopSpeed = 100000;" to turn off terminal velocity, and to get rid of the hint type "terminalCount = 0;".

-the level design is really genius.
-Music is Ok-only way i reached the level 12 is by turning the sound off(just my game-play style) and the game art is well suited for this game.
I reached the level 12 maybe - i forgot counting but it was the third screenshot picture of this game where there are 4 portal. and that was too hard to control.  Would be easy to play , if the player's collision detection area is little bit smaller than its sprite size.
the key to play this game is to control the opposite direction key.
Overall, this game is really good and enjoyed a lot. Would have bought it if it was on mobile platform oriented game. Good job, well made!

Very nice concept, but the rotation of the world gets out of control really fast. after a few levels i was already starting to feel dizzy.

I am one of the weaks ones this messy controls were stronger than me, sorry your game seems funny but couldnt pass level 1.

Good game, its really hard to control xP,  got stuck on the first level with portals! :D

Played this for way too long! Really addictive. Great job!

The field goes craaaaaazy :D Nice game and the controls are slightly out of control ;)

Really interesting art style, seems like it would be pretty time consuming so I respect it being used in a gamejam.

The idea is very good, and the art style too. I have motion sickness so, was a little hard for me to play, but the idea is really great :)

I get motion sick, and felt unwell almost immediately, especially as it started off spinning insanely quickly for me. When I did slow it down, the controls got a little stuck going one direction, but worked fine when I spun the other way. I think it fits the theme really well, but probably not the best game for someone who gets motion sick. I like the concept you were going for though!