#gmtkjam
Submitted by yellosubmarine — 1 hour, 52 minutes before the deadline
Add to collection 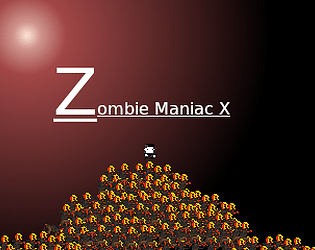 How does your game fit the theme?
Player movement is out of control. Zombies re-spawn everywhere!

Loved the game. Quite challenging, and the art and music are great! Good Job!

So fun!  It was very fun to kill the enemies and I really like the graphics. If you have the motivation you should keep polishing this game.  Congrats on successfully submitting a game to the jam and I hope you learned a lot of new gamedev skills.  Please check out my game when you have free time :D

Really fun game! Very challenging so might use a checkpoint system but still pretty good, I also loved the feel of shooting the zombies. Well done!

Okay, so I like the artwork and how everything controls.

However, this game is rather frustrating to play, and it could be easily fixed by just a few small tweaks.

I think you've got a lot of good feedback in the comments already, so I won't go into too much detail, but to sum it up:

Overall, I like the style of this game, but it's just too frustrating to make any progress in.

thank u for the feedback and time for playing. ..really appreciate it

We haven't managed to pass 2nd level because of the pit  and the ground door.
The animations are funny but the zombie assets look veeeeerry close to Dead Ahead up to the animation sequence =/.

thank u for the feedback. yah took a animation reference from there.

Same. Why is level 2 blocked off!

The artwork and animations are really great.  I agree with the previous comments about the level design being off.  Well done though!

So the textures and character sprites looks great.  The game feel is good, and moving, jumping, and shooting all feel right.  But the level design is cruelly unfair.  Level 1 is totally fine but,

Level 2 - Before you're even able to realize what's going on, you fall into a pit.  If you kill all the zombies in here, the only way out is to reset your game.  Very cruel trap to put at the beginning of the game, especially when you're still trying to figure out if there are any hidden mechanics for how to get out of there.  But even if you do manage to jump over the pit, you're blocked from continuing without an obvious way forward.  With nothing really telling you to do so, you're supposed to jump into an alcove to trigger zombies to come out, which you then have to shoot to continue.  And the way the zombie spawns all of a sudden means you'll probably die to him a few times before figuring out where the trigger is.  Then, after going through a brief corridor and falling down to a platform below, you have to fall one more time to reach the bottom of the screen.  But sometimes, a zombie might be directly below you when you fall, and the camera doesn't pan down until you actually start falling, so you have no way of being able to detect the threat ahead.  The other rightmost zombie actually looks like he was made to not move until you hit a trigger that's near him, which is probably how the other zombie should have been, but the rightmost problem has a different problem -- an invisible object prevents you from shooting him (presumably a hidden zombie, who absorbs bullets when invisible but can't be killed or kill you).  This is frustrating to the unknowing player because it feels like this zombie has an unfair amount of health or something and just won't die, and you end up running into him despite shooting a whole bunch of shots at him.  The secret exit thing is fine though.

Level 3 - You jump into an arena area, where you are now bombarded with too many zombies to be able to kill reasonably.  The only way I found to handle this is to hide in the 1 square alcove that you can go in, but the two square tall zombies can't.  Then you have to wait patiently for an opening and tediously shoot and kill all the zombies.  The idea of hiding in the alcove to solve a combat puzzle is kind of neat, but not when it's so easy to die from execution of moving left and right and shooting, and when it takes so long to defeat all the zombies.  Then there's a trap on the left side of the level, which is cheap, but not totally unfair -- after all, the door down there is gray and there was an indication of another path at the beginning of the level.  But dropping down to the secret area sometimes has that same issue as on the second level, where you have a chance of falling onto a zombie that you aren't able to see before falling in.

Level 4 - Eh, it's short and isn't that bad if you know what you're doing, but since the lives seem like they're bugged (perhaps you're losing 1 life for every frame you touch a zombie, even after you die) it means one mistake in any part of the game and you have to do everything over again.  And this level gives you practically no time to think.  I'm thankful for the brief invincibility period when the level begins at least.

...salute to u sir! Thank u for the honest review and time for playing. U r the only one who reached the final level and won the game. ...really appreciate it.

Amazed with your game! If after the jam you can upload a web (or mac) build i'll definitely play.

thank u for the honest feedback

the concept is ok, the enemies are a bit too tanky imo. The zombie walk cycle is also a copy of the default twitch follow/subscription notify bot so i'm not sure about the whole "We created all art during the game jam" part.

thank u for the honest feedback. yah took a animation reference from there.

I like the mechanics. Having to go back to the start was pretty frustrating, I feel like it could have started you over on the level you were on.

I wasn't sure initially how to get past the barrier -- it's a bit weird since you have to jump up on the side wall to actually get the zombies to spawn (I think?).

I also fell into the pit and then killed all the zombies which left me with no way out.

Hi, I like the toggle to move mechanic. Had a sort of 'out-of-control' feel to it. I think you can take the game further with this kind of control scheme.

The enemy spawning needs some work so the player doesn't feel like they got killed out of nowhere when an enemy spawns on them.

Like the idea and concept, the thing could be worked is enemies suddenly appearing thus they randomly kill you

Nice work!  I like your take on the theme, the character always running forward and with J to fire, gave it an awkward out of control feel, whilst still being fun and challenging.

really cool idea and the art is great. Although i really dislike the fact that enemies spawn on screen because I ran into the issue of enemies spawning inside me and killing me instantly, that part felt really unfair. Other than that though it was a great game, keep up the amazing work :D

Love the art. I did get frustrated when losing a level sent me all the way back to the beginning. Also I may have been using the controls wrong, but hitting a button with a shot seemed pretty difficult. I love the concept and execution of someone who can't stop moving.

Thank u !  for your honest feedback and time for playing.

This game is cool, but it would be nice if there was a reset button, and when you die you don't have to start all the way over.

Thank u ! for your honest feedback.