Thanks for the bug report, I was having trouble reproducing this issue :)

Thanks for the feedback! I really should have some kind of quick setup for doing key customization, it's just something I never really implemented for a jam game. Will definitely do so if I expand on this. Out of curiosity, what kind of keyboard do you have? I've never heard of a keyboard with space on the right side.

Also the game should work using W (or up arrow) as a jump key, I just only mentioned it in the description (whoops)

Loved the music increasing in intensity. Managed to get five levels, though it collapsed after maybe ten seconds :P

If there was some way to rotate the camera that would make placing the glasses much easier, once you get off of the table it becomes difficult to see where you're actually placing them.

Really fun :) Impressive building all the systems required for a jam. Looove the particle effects!

I only made it 240m, interestingly enough I had the most success once I'd lost so many wheels that my vehicle was a top heavy gas powered unicycle

Thanks for pointing it out, will be (hopefully) fixing all those sorts of bugs once the game jam rating period is over :)

Thanks for the feedback, I'll have to check out that bug when the jam ends :)

Thanks! I want to see a speedrun as well, even I haven't managed to get through the whole game without failing at least once :P

Thanks for playing! Thankfully that level is pretty close to the end, you weren't missing out on too much :P

Never fails to make me laugh when people use their voices for sfx in jam games :P Was fun, I liked the variety of weapons.

Cool game! Great art and music. I got stuck on the third level, couldn't manage to get the fingers sewn on before he started freaking out.

Liked the art and music. Could have used some checkpoints in the levels but I did end up finishing the game :)

Cute visuals, fun little game. At first I thought the eggs would also break if they ran into anything which was making things significantly harder for me.

Fun game. I liked the playable menu, but at the same time it made me think the objective was to destroy things rather than time attack. The turning felt pretty good especially when you started going real fast on level 3 :)

Very fitting to the theme. I like how the jumping behaves differently depending on how you're moving and you have to angle properly to spread out the damage

Excellent pixel art and sound. Had a bit of a laugh at the death animation :p

Fun little game! I think the most fun was had just repeatedly running into things and getting as many bones to spawn as possible. If the bones could somehow influence the gameplay (Like being able to jump on them, though I've definitely seen that idea implemented before) that would be pretty neat

I had an issue where I would die and click the replay  button, but the enemies immediately shot and killed me again. Also the game seemed to crash after that happened, or at least I couldn't click on anything.

Very neat concept, was pretty fun. Once I scrolled down and read the description my second play went a lot smoother. I think the main thing was that I didn't understand the health system initially.

I had a controller connected but it looks like it still happens without it. When I'm playing the drift happens even when my hand is not on the mouse.

I might just be dumb, but I couldn't beat the penguin. You could just barely hit him with melee with a full platform (and if the platform breaks at all you probably won't be able to hit him). Was he supposed to move onto the ice at some point after firing a bunch?

Impressive to make a 3d platformer for a jam :) Cute visuals, really adorable how you actually get installed in the house at the end of each level.

I spent a decent chunk of time waiting for clouds to come back. One way to resolve that would be to make the clouds start moving once you jump on them rather than having them move constantly (Though it doesn't work for every situation)

There's also some kind of camera drift? It looks nice when you're idling but it slightly changes your direction while you're moving.

Love the idea of having reduced capabilities when carrying the orb. I was thinking about something similar for my game but scrapped it for the sake of simplicity.

Thanks for the feedback! The catch radius is actually pretty big but it looks like I forgot to make the collider on the flame bigger as well. Trajectory line is a good idea :)

Oof, I'll have to get that fixed. Thanks for mentioning it :)

Fun little tower defense game! The art must have taken a while! Enemy variety allowed for at least a few different strategies, mainly around using barricades

When I first started playing I assumed that the glamour springs needed to be placed in the yellow square that pops up (The one showing your character's "place area"). Took me a minute to realize that you could place anything anywhere. Also took me a bit to figure out how to use the buffs & special attack.

Kind of unfortunate that the cards didn't fit at full scale, it's a bit hard to see them when you're not hovering the mouse over them.

That's actually in the game, just in the last few levels :P

Made that particular room a bit easier by reducing the amount of jumps you have to do :)

Thanks for playing Shibey :) The difficulty might be a bit off, I haven't had too many people playtest yet.

Added jumping with w/up arrow and added a pause screen with the current room number (Press escape). Thanks for the feedback :) 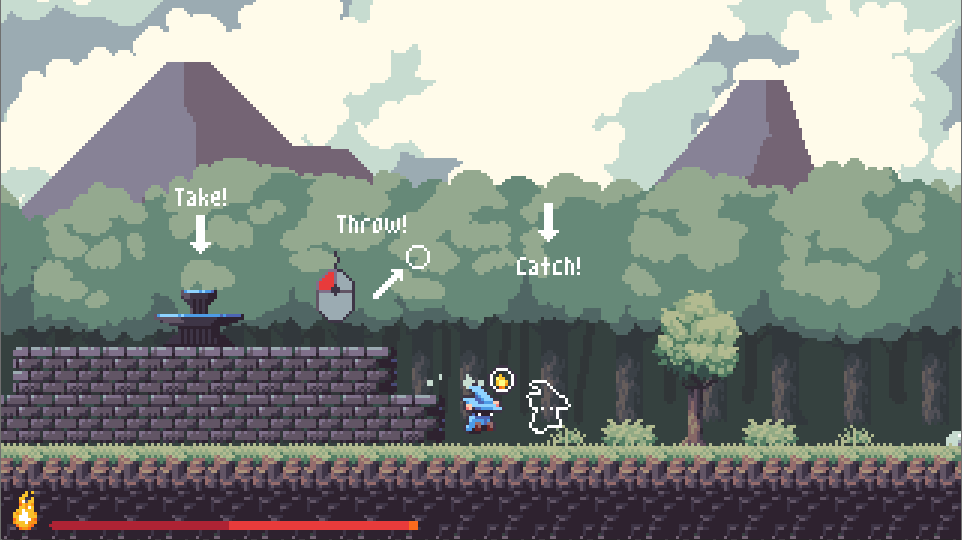 A "hot potato" platformer where you have to transport an eternal flame in a glass ball. Meaning, you toss the ball up in the air and have to catch it to avoid it shattering. Made for Godot Wild Jam #44.

Thanks for the feedback :) In retrospect I probably should have just made the player able to control the cannon directly rather than pushing it around with physics.

Nice work Shibey. Solid worldbuilding/narrative stuff as usual. I liked how you were going for a bit of momentum based platforming with the slide move. Nice run cycle as well.

I think the platforming felt a little rough. You could have a slight period after the player walks off a platform where they can still jump (And not do the double jump). I think the spike hitboxes could also stand to be slightly smaller, or the player hitbox slightly smaller to leave a bit more room for error.

I feel like the ziplines should conserve your momentum, at the moment they just cause you to slow down.

I think in a momentum based platformer it might be better to have the player's attack hitbox be a circle around the player rather than in front.

I felt like the wind was a bit too strong, running against it made you a bit too slow.

At first I thought the attack not having any kind of cooldown would be overpowered but it turned out to be pretty fun just button mashing.

I liked the few moments where you had to make a leap of faith, where there was literally nowhere else to go forcing the player into jumping off. However in at least one of those situations if the player walked off instead of jumping they might think it's unfair.

For the first boss fight my first attempt I literally just tried to button mash it to death. It was kind of hard to tell if there was any kind of damage cooldown but I assume there was. I also tried to attack the bees initially because I assumed they were like the normal enemies.

For the second boss fight I spent my first several tries assuming that I had to stay on the upper platforms because of the thing on the ground, which got me killed quite a lot, especially after killing one of the side eyes.

Reply
itch.io Community » General » Release Announcements · Created a new topic A Cannoneer's Curse - Top down shooter where you launch yourself out of a cannon
Thoof323 days ago

A top down shooter in which you fire whatever you can out of a cannon to defeat enemies, whether that's enemies' bodies, or even yourself!

I didn't really do too much marketing for this. I do have a decent-sized twitter account so that slightly boosts the view count. The game also won this jam game, which resulted in it getting featured in a youtube video. The jam also happened when there weren't any larger jams going on at the same time, so there were less games being published.

I think the best thing you can do is make your cover image, screenshots, title/descriptions as appealing as you can. If enough people view your game initially then it'll end up on the itch front page which will boost the view count even more. And if the game itself has an interesting mechanic or some other draw, then other people will sometimes advertise it for you via doing youtube videos, blog posts, etc.

Thanks for the report :)