A slippery runner about cooling down the world
Submitted by MCMGameStudio, DeadPie (@DeadPieGamer) — 7 minutes, 56 seconds before the deadline
Add to collection 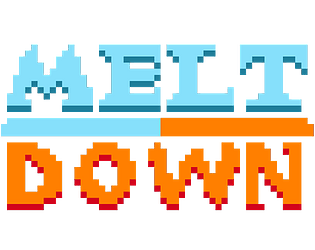 Ranked from 103 ratings. Score is adjusted from raw score by the median number of ratings per game in the jam.

How does your game fit the theme?
The character is out of control, with it's slippery and bouncy mechanics

The last sign on the first level is extremely misleading. I had no idea that I had to enter the fountain to freeze it. In hindsight it makes sense, but I though that the game was just unfinished. Otherwise, I thought it was fairly enjoyable. At first I thought the bouncing was a really nice way to do wall jumps without making the player figure out what combination of keys and actions did it. But I found that it was a bit of a hindrance because you always bounced upwards, even if you are falling down. It was also a bit challenging to go back and forth between being not slippery and slippery.

The last sign on the first level was accidentally placed in front of the sign telling you to freeze the fountains first, so that's definitely a mistake on our part. We're currently developing a way for you to more easily fall down (especially narrow paths) without bouncing up again as that's one of the biggest complaints about the game.

The last sign on the first level is extremely misleading. I had no idea that I had to enter the fountain to freeze it. In hindsight it makes sense, but I though that the game was just unfinished. Otherwise, I thought it was fairly enjoyable. At first I thought the bouncing was a really nice way to do wall jumps without making the player figure out what combination of keys and actions did it. But I found that it was a bit of a hindrance because you always bounced upwards, even if you are falling down. It was also a bit challenging to go back and forth between being not slippery and slippery.

I really enjoyed this. It's a beautiful mixture of skillful and frustrating (may as well have called it Super Ice Boy haha).

The art is adorable. I was a little bit confused to why sometimes I could climb walls, and sometimes I couldn't (I realised after some trial and error this was bound to how cold I was). This mechanic could be used in some awesome ways. :)

I gave myself a pat on the back for finding all of the fountains, and my only advice after finishing it would be to maybe tone down the slipperiness just a fraction, because I think the auto-jumping off walls is a great mechanic in its own right :D

A nice take on the concept with some really fun, interesting mechanics! The threat of melting is a great driver to get you through the level! I also really like the aesthetic of the game :) Controlling the character could be a little frustrating at times but it ties in well with the theme and it wasnt so much that I found it to be significantly so! Overall a great jam entry, well done :)

Good game! The graphics are cute, especially the main character. I think the overall mechanic of the game is quite complex and can lead to some very in-depth gameplay. But this can also be a crutch if not introduced correctly to the player.

If you plan on developing the game further, it would be good to introduce the mechanics to the player in easy to digest levels. The signs that give you hints should also be compulsory to look at. Currently they're easy to dismiss.

UI to indicated how many fountains are left is also definitely needed.

Overall great work! I noticed that the player character sits down when idle for 10+ seconds. I like small touches like this.

Cool idea! I know the whole point of being an ice cube it that you're slippery but it was a bit too slippy!

Concept is great but automatic wall jumping is sometimes annoying and leads to bugs. Also character design is awesome

I like the overall idea! I think it's really hard to find the perfect balance when it comes to anything in games. That said though, I did find it pretty difficult to control the player sprite. It certainly felt "Out of Control" lol, but it was maybe a hair too difficult.

Either way, I thought the art was pretty good, and the music felt very Megaman-esque, and fit the concept nicely in my mind.

Please continue this work, I feel like this could easily become the birth of the new speedy eggbert games. Icy... ice pun name lol

i loved the story behind the game. its really fun.

here are more thoughts about it:

1. dont require knowing WASD and jump in order to get to the tutorial for WASD (that was the funniest bad tutorial ive ever seen). Put the controls on screen before the player ever has to touch a button.

2. there really needs to be an indication as to how many fountains need cooled before the door opens. Some UI (like 1/3 Fountains), an icon on the player, or even an indication on the door itself would have beenn ice.

4. When Im standing still next to a wall and then jump, I should jump straight up and NOT be bounced away from the wall. This little wall bop mechanic was very frustrating. Honestly tho, it was fun to hop up a single wall, but there were several cases where the character should not wall jump against a wall.

5. Messing with things like speed up time and slow down speed is a very slippery slope. Its very easy to make a game thats unplayable because the very physics governing the character are constantly changing, making it near impossible for a player to complete a level. Luckily, this game was pretty safe in that no levels were too hard or required extremely concise inputs. So Id say you get away with messing with things you shouldnt... for now at least (please keep this in mind when making the post-jam version).

also, what is the ice cube's name?

art is mostly good. it could use more variation in the tile textures, but the animations were solid. The gate felt a little out of place style-wise, even when closed.

The gates were supposed to be placeholder sprites, but we didn't find the time to replace them

I didn't like the over the top movement speed at first but then later when I figured out it depended on how melted you where and got more feel for it, I warmed up to the idea (pun intended). The wall bounce can be a bit annoying though.

It looks and sounds lovely. Fantastic job! The automatic wall bounce ended up making it a bit annoying to fall down the narrow sections of each map. I didn't know ice bounced!

However it's a very fun mechanic and one that has a lot of potential if ever expanded out.

I really loved many of the mechanics, the fact that my character is melting most of all.    The tutorial signs just don't work with the speed potential of the character.   It's possible I missed it but the fountains usage didn't seem to ever be explicitly called out and it's just long enough that you may not stand near it long enough to trigger,   you could also just make the fountain on the tutorial level much shorter and that might trigger it.    I would also make sure to explain the effect that melting has on his friction,  it took me far longer than I would like to admit to learn that, but once I did things were much easier, and I can definitely using the inverse of that later in levels (where you have to have a certain level of melt to complete a section).

The sign explaining the fountains was accidentally covered by another sign, so that one is on us. We're planning on making the sign hitboxes larger and make you press a button to read them so they don't take up screenspace without permission, but we just didn't have the time to make it in the jam build and didn't want them to feel like they covered the content too much

Yup, I figure most of the things in most comments are known issues that were accepted due to time constraints or were just from lack of play testing time.    Great game though, I can't wait to see the next version :)

Had fun playing and finishing this game and even found an Easter Egg sign so feeling pretty cool right now. Got softlocked twice but got better w controlling as I played so it was less and less of a setback.

I saw it on a stream and I thought It's so hard play and wouldn't be fun. But when I played, it wasn't that hard and I actually had a good time playing it. Well done :)

This is a nice, well made platformer that provides a sense of urgency with the threat of melting! I hope you keep working on it and make more levels!

This game is very cool! I enjoyed it, I really liked the concept and the character is so cute! good job! rated! please check out my game too :D

Submitted
It's Over
LikeReply
Unai Estavillo BonetSubmitted1 year ago

Really cool idea, love how you played with the ice mechanic. It was refreshing nonetheless.