A retro platformer, but you can only use each input once.
Submitted by Scadimal — 2 hours, 16 minutes before the deadline
Add to collection 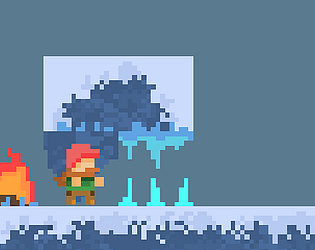 It took me so long to figure out how to play this game, but once I did, it felt so rewarding! That said, I didn't realize the fire had an AOE until I skimmed through these comments (even though the first level makes it obvious), so I think a visual indicator for that is needed.

I think this game is seriously underrated; it's one of my favorites of the jam and I would love a full-fledged version. Fantastic job.

I finished the game! it was great thank you very much

Cute little game. I reached what I believe is the end?

I loved the celeste inspiration. At first I didn't get the game, b/c I didn't read the description. But once I got it, I understood. I accidentally did a bug where I dashed in the very opening fireplace it said I won the game so I was so confused. I restarted the game and figured out how to properly beat the game. I actually yelled out some curse words at one point but it was a fun challenge. For some reason the end game message about it being 4am really was a nice touch. I could really relate to that

What a fantastic concept and execution. Each level felt like a puzzle I had to solve, some being pretty clever. I liked the dash as an alternate form of movement. I also liked the feeling of the controls, they were relatively precise while allowing interesting movement such as wall jumping up a shear cliff or dashing mid-air.

Some suggestions: a clear indicator of the size of a campfire's AOE, prevention of accidentally going back to the previous level, dying, and losing progress, and of course, more levels since it ended as I was really getting into it. Maybe a softer difficulty curve as well.

I did notice that this game felt veeery Celeste-inspired (art style, character, dash, platforming-puzzle nature), which isn't a bad thing since I love that game :P

The visuals are nice. The idea seems cool and simple enough. The game looks like a regular platformer and puts me in that mindset where my mind is so hardwired to release the button as soon as I think I don't need it anymore that this game is just breaking my mind. Unfortunately I didn't finish the game and I'm moving to other games as I wish to try as many as possible, but I have to say this is one of the games I'll come back to even after the jam.

Theme interpretation is on point, as is the originality. Regarding the design: some kind of tutorial would be nice since this way I think that either I don't understand when does one-press work and when it doesn't (I'm able to use the controls twice if I'm near the fire, but not sure what "near" is).

You're absolutely right, I should have put more some simple tutorial levels to teach players the mechanics. Also good point, showing the fire's radius or something would have been a great idea!

Thanks for all the kind words and advice!

Ooooh yeah I love that!

Geez, it take a while to acomodate to control, but after that the game become enjoyable. For my taste, the game feels nice and polished, but the "entracne seal" is quite high. Overall, nice job. After a  quick rebalance the game have a chance to become a diamond.

Really nice idea! Was quite some challenge, though I think I might have skipped a level by accident :(

And is it intentionally designed that you can dash out of the camp fire to keep your dash AND move?

Thanks for the kind words! Yeah I let some friends play it and there was a strange bug where they skipped ahead, still haven't figured that one out yet :(

As for the second part, actually yes! It's involved in one of the solutions for the rooms (Some have multiple paths you can take). I should have put something in the game that explained that better, sorry about that!

Thanks for the advice!

i also thought keeping dash after campfire was cheese

well done, this is a great entry.

Submitted
Difference of one
LikeReply
ScadimalDeveloper1 year ago

Nice entry to the jam! With some polishing and a little bit tighter controls i would say you have something nice there. A lot of good possibilities for this puzzle platformer. Great job! Keep it coming!

Great work! I think the first level could have been more helpful and more easing in! :)

Thanks! Yeah I definitely should have set up some more of a tutorial level or something :/

Really interesting concept and idea! Would like to see this game with some more polish one day. Great work :))

I love the idea and the flow of the game, I think your environment really worked well with the theme of the game.

Some notes, I think more instructions or arrows to give "hints" would help a lot

Also, WASD work without the "limit" mechanic, I'm sure this is a bug but I just wanted to point it out in case you continue to work on the game.

Ahh darn I forgot about that, thanks for the feedback!

Haha yeah looks like that was the problem. I used GetAxis("Horizontal") for the movement originally, but not for the part where stops you from using it. Thanks for the advice!