Experiment gone wrong... fight off interdimensional demons with your iridescent lance!
Submitted by NeptunianEclipse — 2 hours, 3 minutes before the deadline
Add to collection 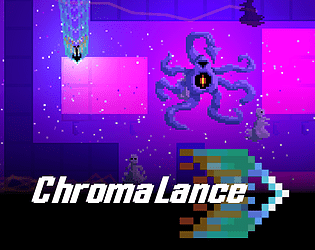 it's so so elaborate. but relay!  did you do only in one day?

Art and coverdation is great here, I enjoy it

I enjoyed this game - the visuals and dialogue were great, as well as the concept of the lance! It's quite difficult, which is maybe the intention, and the game did not seem to end or reset when I died but otherwise great work!

Nice game, though I felt that the controls were a bit too confusing. Great work on the effects!

Liked the particle effects a lot, and how the bullet controlled. Would have like my own character to move a little faster as well as maybe have different uses for my "bullet" (open doors, solve puzzles for example). Nice game! :)

Thanks for the feedback Elastiskalinjen (hope I spelt it right). I may have gone a bit overboard with the particle effects, but I like them too. Yeah the slow character didn’t turn out to be as interesting as I had originally envisioned, more just frustrating.

That would be pretty cool. I had doors originally but then ran into problems with collision detection and scrapped them in the interest of time. When I keep working on this I’ll try and add lots of interesting interactions of the lance with the environment :)

But hopefully you have learned a lot and had fun and that is always the most important :) Great job again! (and you spelt it right :) )

Absolutely! :) With every one of these I do it becomes less stressful and more just fun :)

Really Cool Game, loved the art style and the whole conversation thing.Restart button is definitely  make the game more alive.I would like to ask about your path guessing thing ( is that A* or any feature used in Unity) loved the game through.

Thanks phyw! The conversations were fun to write. Also this was my first time using pixel art properly since I started messing around with it a month ago, and I’ve never been very good with art so I’m glad you liked it. For sure about the restart button. I tried to implement one but got into problems resetting the game state with how I had coded it, and didn’t have time

I indeed used A* for the path finding. I used the Wikipedia page as a reference and basically just rewrote it in C#. The monsters calculate the shortest path to the player (or a random portal if they’re in the spooky dimension) a few times per second. They also add some random offsets to the path to make it less grid-looking. I think unity only has nav-meshes built in, which seem a bit overkill for a simple 2D environment, but they might have been appropriate if I knew how to use them.

This game is pretty cool!  Looks good.  How did you fit the design in with the theme?

Submitted
Only One Burn
LikeReply
NeptunianEclipseDeveloper1 year ago

Thanks Leyline! The original idea was a game where you only have one projectile/ammo/bullet/arrow, and that you’re completely reliant on it as your only defence against a horde of enemies. I wanted to make that single projectile fun and interesting to use. Then I also added the constraint of there being only a single level, though that was also very convenient for saving time.

I like the theme of the game, as well as the gameplay for the lance loved throwing it around the map it was great fun.

Gotta say though i had some bugs that made me laugh, not because they were stupid but because it made me kinda over powered. 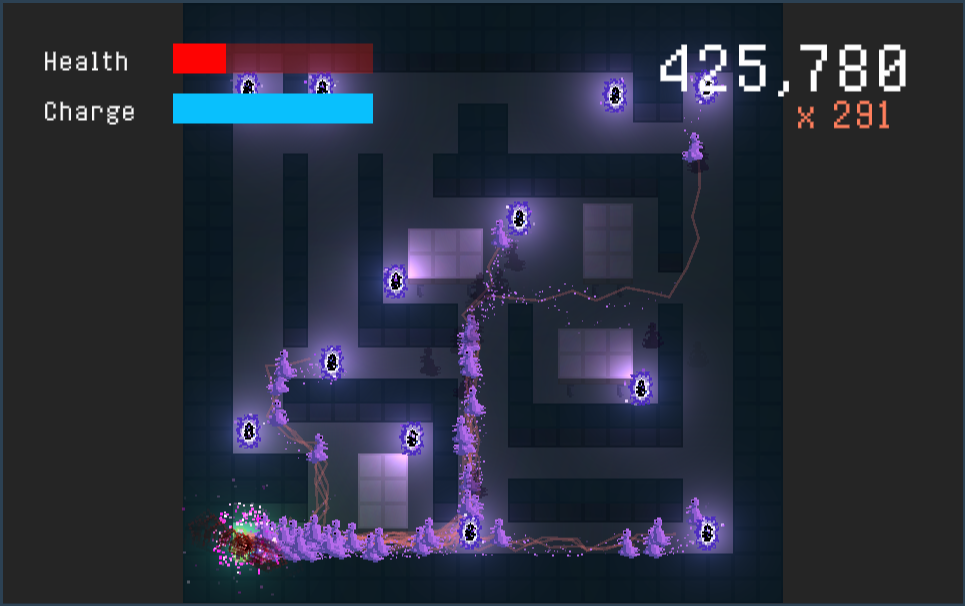 There was this moment when I was trapped in a corner unable to collect the lance on it's journey back and it just kept killing. I think this would have ended up going on forever had I not closed the tab but it made me laugh for a while.

Very fun game, if you work on bugs you could get this on mobile or greenlight no issue.

Haha, that’s great. I think I encountered something similar once early on and assumed I had accidentally fixed it, apparently not :). Collision detection man, I relied way too much on it in this game considering how little time I game myself to fix bugs.

Glad you enjoyed! I’ll definitely continue working on it to make it into something more whole and polished. Though I think I’ll need to code it from scratch, the current code would probably collapse once I added one more misplaced if statement :P

Typical game jam code though, I'm sure everyone is the same.

Nice Lovecraft theme and quite hard (haven't managed to beat second "level" yet, but I'll give it one more try). Love the visuals when the ancient one appears, but controls are clunky.  Speed of the character is slow imo, navigating the weapon is quite pain, which doesn't help with the amount of enemies spawning on the map, and when you loose all your health, nothing happens. Some end game screen with restart button or something would be nice.

But I liked it, great job!

EDIT: I miss the restart butto/option a lot.

I wasn’t initially planning on a Lovecraftian feel, but it kinda just fell into that once I decided I needed a source of all these monsters and really leaned into the “lab experiment gone wrong” thing

My plan was to make the player intentionally quite slow, to encourage more careful positioning and defending with the lance rather than running away. But yeah, I think it just ended up being more frustrating than anything.

The lance controls could do with a lot of refinement. I wanted to prevent the player from being able to do a U-turn, so they would have to commit to pathing through the maze of corridors. I might try alternate ways of controlling it, like instead of you turning it manually, it would just turn towards whatever global direction your pressing with the keys/analogue stick.

There was a game over screen but I seemed to have broken it in those last few frantic hours and now it only shows up sometimes. Oh well, just jam things :)

Really interesting concept, I had fun weaving the chroma lance through the maze! It feels great to get a big bunch of enemies all in one go!

Sometimes it was a bit hard to play though. First of all, if I hit a wall and get stuck off course, I can't get away from any enemies (Which is really frustrating).
And secondly, there are way too many enemies at once. When you get to a certain point in the game, leaving one portal open is guaranteed death. While it should definitely ramp up, it feels like too much.

EDIT : Also it looks like there's a bug when you shoot something that's too close. It seems like the chroma lance disappears when it enters a collision with the player, but if the target is too close then it never stops colliding with the player, so it never returns properly.

Still a really cool game, that had a really nice feel to it. Awesome job!

Thanks for the feedback Scadimal! The collisions were definitely one of the harder things to get working reliably, and as you found there was still lots of issues left. Adding ricocheting helped a lot but if you enter at a sharp angle or hit a corner directly it can still get stuck.

Yeah, the difficulty is something I didn’t do much play testing of. I mostly focused on the initial spawn rates, but ran out of time testing how the increase in spawn rates changed the difficulty over time. Going back and looking now, if you miss the first or second orange portal then your often just screwed, which isn’t great I agree. Lots of numbers tweaking to do in future versions :).

Hmm, that might be because I have a flag to prevent the lance from being collected until it has stopped initially colliding with the player. Might want to add a timer or something to that as well.