Game made for the GMTK GameJam 2019
Submitted by Man3w — 5 hours, 18 minutes before the deadline
Add to collection 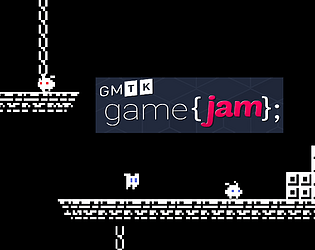 This was surprisingly fun and despite the control issues, is something I'd play outside of a game jam, so well done! I liked the feeling of speed - when under time pressure like this and having to search a large-ish map it would be frustrating if it took more time to get from one side of the map to the other. For me, it might feel better with a slight acceleration curve and some niceties like coyote time, but the speed is good as is.

I really liked the "in-level" ui; somehow it did a lot to add to the atmosphere of exploring the level. I never ran out of time, so while the timer was nice to add a little bit of pressure (and a 'score' at the end), it didn't feel all that relevant. Maybe you could experiment with not having the timer reset on the player's death and see how that affects the feel of the game.

Submitted
The Only One for You
LikeReply
Ran-chanSubmitted2 years ago

A fun idea, the art looks great in it's minimalism (though I did mistake some tiles for ladders)~

Movement is way overboard though: makes it hard to move precisely and I ran into things a lot because I couldn't stop. Reading the description I can see why you went for it, but with zero acceleration and at this speed it makes things harder than they need to be.
Which is a pity, because honestly there's little else I'd have to pick at (without being petty). Took me a while to realise I needed the mob with the red eyes, but that's more me being unobservant ^^;

This is a neat concept, I know people have mentioned this before, but it would be nice if the imposter had a random difference, rather than just red eyes.

I kind of like the extreme speed, it makes navigating more of a challenge but it would be nice if it had a bit of a slower acceleration curve so you could finesse a bit more.

Thank you very much for your feedback.

Platforming itself needs serious rework; sometimes I didn't feel in control of the character at all. The core idea is there, but may have been used in other way: instead of grabbing a coin, or only identifying the intruder by its eyes, maybe the intruder could have other subtle differences (ears, shape).
Check our game! https://cerosware.itch.io/one-stick-shooter

Thanks for your comment, it's very useful.  I will work on the platforming system (I had several good ideas from the comments)

I thought about different subtle but I didn't implement them... :'(

Nice idea and adequate realisation, except movement, character moves too fast, eventually I spent my time on struggling with movement instead of exploring level, be careful next time with it. Movement it's a vital part of each platformer.

Submitted
One Spear, One Kill
LikeReply
Man3wDeveloper2 years ago

Thanks, I'll not make the same mistake next Jam ;)

Interesting concept, I liked the fact that you mixed things up a bit when introducing the need to first collect the "Coin" before being able to identify which one of the critters is the intruder, and since you have one shot it really fits the theme.

However there are issues, first of all the character moves WAY too fast and twitchy ! This makes it very hard to control, and then there seems to be a bit of collision detection issues with the platforms sometimes you can be a bit half through the ground when you land on certain spots.

I'd say if you want to somehow keep a bit of speed on the character, maybe try to have it build up speed before going so fast this could be somewhat of a middleground between fixing the control issues and not really slowing the character down (although i.m.o it would be better to slow him down at least a bit)

Despite all this keep at it, it's a neat concept and it is quite fun to play appart from the previously mentioned issues :)

Thanks for your feedback with one is very interested and useful.

That was an interesting concept you had there. Finding and shooting the odd one? Hahaha, I enjoyed it a lot! There were a couple of problems, though: the controls felt very unwieldy. You couldn't control how high you jump, and the acceleration is too high (I actually think there is no acceleration, it just moves at top speed all the time). This means you can't do any precise movement, since any touch you do on the control will make the character travel a great distance, since the speed and jump height are also really high. Jumping off of ledges was very rough because of the high speeds, and landing on platforms was also rough, since we had to jump all the way and use the unaccelerated horizontal movement to land. I felt like I was fighting the controls all the time.

But yeah, the idea is very good!

thanks for the feedback. I couldn't be disagree with you for the controls system I must work on it, your advice are precious.

Really nice game, I like the design, the movement was too twicy for me, felt out of my control at times but i guess that was intentional, It took me 40 tries to finish the game, nice touch!

among my best games...

Cool, would've been more interesting with more design variations and mechanics, but it's a game jam. Also the game's graphics remind me of Downwell

Thanks, you right for Downwell ;)

For your game, I already rated it, I realy like it.

Similar thoughts to CrustyJon to be honest, although I did quite like the super fast movement speed actually. With the addition of some acceleration / deceleration to give the character some weight, maybe a slowly speed in the air too, I think it could feel quite good. Nice work!

Thanks for the feedback and the good ideas.

I will works on it after the Jam ;)

The game is interesting enough, but the whole "intruder" thing doesn't really come up all that much IN gameplay. Sure you have to find the intruder, but it feels the same as looking for an "exit door." The speed of movement is also a bit too fast. Other than that though, I had fun!

thanks for the feedback and the rate ;)