Mix potions, save your city.
Submitted by Kaleido — 13 minutes, 41 seconds before the deadline
Add to collection 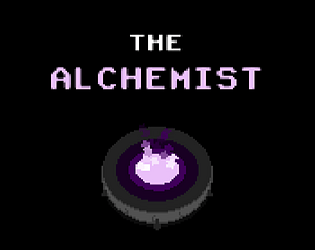 The tutorial was well made and helpful, I have appreciated it.

Starting directly with a huge, multi-stepped recipe feels a bit overwhelming. Maybe having some minor tasks to complete before it would have been better, but of course with a jam deadline it can be really hard to find the time to expand the game.  That was the only weakness, everything else was fine.

Hope you find the time to check my entry, any feedback is appreciated.

I wish there was a way I didn't have to brew other items I already have brewed. Loved playing it.

Yeah if I could make one change, it would be that potions can be used multiple times!

I really like the aesthetic of the game. It's nice to have put so many recipes opportunities, it's a cool concept. I enjoy the little music ^^ Good job =D

Very nice idea, but the act of mixing ingredients is a bit too long and repetitive..after I brewed the first death I didn't really feel like doing it all over again. Maybe by skipping the act of walking to take the bottle it would already be less cumbersome. I love how much thought was put in the book and the mixing of the ingredients, for my last Ludum Dare I also created a game called The Alchemist but it only had like 4 combinations :P (although that was more combat oriented). Great job with the artwork and audio.

I always love game with magic and alchemy Good Job

Recipe book was really overwhelming for me but game has great atmosphere. Really enjoyed writing, graphics and music.

Cool game, well polished, it was a fun and relaxing experience, good job!

Maybe after making a potion you can have a shortcut to make it again, having to make everything from the beginning is kinda tedious because of all the walking.

The art is great, music and sound effects too, but the music is a very short loop, even so it doesn't get that much repetitive, it is a very relaxing song.

Maybe for a full game you can make a narrative focused game with more little stories where npcs come with their problems, and then the player must choose what potion to give, making different potions have different outcomes, this will get you reputation for you shop, and multiple endings based on what you did to the people that came to your alchemy shop, i would love to play a game like this.

Anyway, good job, that was a fun game.

Here is my game:

Good game! It reminds me a lot to Doodle God, with this thing of mixing up the elements into more complex things. I liked the SFX, the music was pretty relaxing, making the crafting more enjoyable (the loop was short, i would like it to be longer). I expected the plot twist when i saw the recipe (Death+Death=¨Antidote¨ lol). Amazing entry!

Ok, I have to say that I might have cheated a little by writing down the final recipe on a piece of paper to not open the book all the time. Sorry for that, but I love that you made me take a piece of paper to complete your game :D Not many games force me to do that.

Ok, after writing everything down it was time to start brewing. Everything went according my plan, but then I started to mix up Flora and I recognized that I'm not having rain. Damn. Making a Seed again. Ok, careful now. First Death finished. I was happy. Then I realized, that I need a second one. Noooo...

Ok, focus up, we are halfway through. Making Life again, then Seed, then Flora. F***. Forgot the rain again. Ok making the rain first now. Focus up now. No errors now. Second Death.

During the mixing I had the feeling that this game somehow doesn't follow the theme. I knew that something is fishy. And then there was the end.

I think my text above shows that I enjoyed your game, at least to a degree. Running around got a little tedious after a while. It would have been cool if you also implemented the arrow keys for movement, because switching my hand would have helped a little. (Playing with the right hand on WASD does not feel right :D).

It helps the immersion to pick up the empty bottle and then fill it with one of the main ingredients, but I would have prefered if I could just go to the ingredient and take a bottle filled with it from there. Would save some walking. I don't know if you like this idea. Btw. I love how your air flows out. 100 points for realism :D Same for earth, but some could say it's sand. But wait, sand is an ingredient itself.

The graphics are nice. The only thing that is missing is the player idle and run animation, but that's ok.

The sound got a little to repetitive for me because the loop is very short. Sorry.

I hope you enjoyed my feedback and I also hope that it helps you improve this game or future games ;)

Thanks for your feedback! I appreciate that you wrote down some recipes on paper. It isn't cheating at all. I call that being resourceful!

My changes that I would make to the game would first and foremost be that potions can be used more than once. I also found it to be too much running back and forth. I like the idea that you suggested. Makes sense about the music loop. I made it sooo last minute.

Appreciate you taking the time to play! Glad that you had a good time.

I can totally understand the music loop problem. Had the same problem with one of my other game jam games :D But to be honest I was also a little bit to lazy and I hate making music.

One question. I see that there are many recipes which are not really used in this game. Did you plan to have several "customers"? Or have you been to motivated mixing stuff together? :D

Maybe if you give him another potion there will be another outcome ;)

Some of them were just added for fun.

Hahah. No it's ok. If you give him a truth potion, he will spill the beans on what he is up to.

Very relaxing game, the concept is very catchy. Nice music and sound effect. The pixel art fit well to the genre. Maybe to push things, it would need some little FX when to potions are being made. But I had a great experience playing your game, thank you !

Incredibly fun and relaxing! The catchy, but not repetitive, music along with the fitting sound effects gives an extremely polished and fluid experience (the sfx and particle effects makes throwing the flasks away to explode against the walls oddly satisfying xD!). The simple and intuitive controls also contribute to such an experience.

It was very enjoyable for me! Only thing that slightly reduced the immersion was that sometimes, there was a weird flicker while flicking through the recipe book - perhaps that is only an issue for me. Otherwise, I absolutely loved this adorable game. Great job!

Thank you for the feedback! And thanks for letting me know that you had that experience with the page turning. The book-turning does a full redraw of each page AFTER deleting the previous pages. So there is probably a stochastic flicker in between for some users. If I had more time for ironing that out, I would draw the next pages before they are swapped out. Thanks for bringing that to my attention.

I'm glad you enjoyed your experience with my game! Thanks for playing.

Very neat!  The simple movement, carrying the alchemy flasks, checking the recipes in the book, brewing the potions, and conversing with the NPC was all very cohesive and fun.  The artwork is really cute as well.  Charming entry!

Thank you! Glad you enjoyed it.

Reviewing more entries tonight and I have yours at the top of my list.

Making the potion was so relaxing, I could just do that for awhile~
Pft also death and death to make an antidote...doesn't make too much sense, but that's what makes the ending so nice. Also  was there some text after the ending, but before getting taken to the main menu? Something flash by too quickly for me see or maybe my comp was trolling me.

Exactly! Haha. Maybe someone should try giving him the truth potion instead...

Shouldn't be any hidden text.

!!! Oooh should try that owo

Hmmm...can we give him other potions we can give him?

Haha aw no, but that would have been fun!

That was really fun and I loved the ending!

This is pretty cool, I like how you can make so many potions, just from starting with 4. I couldn't manage to finish it though so didn't see how it fits in with the theme but I'm sure it has a good ending!