An adventure to a rumoured utopia, with meaningful choices and multiple endings.
Submitted by ItsNotSimon, Ren3 — 5 hours, 9 minutes before the deadline
Add to collection 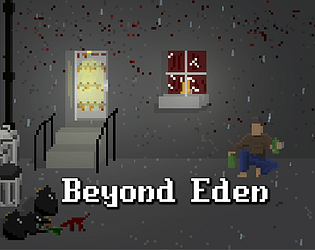 Ranked from 101 ratings. Score is adjusted from raw score by the median number of ratings per game in the jam.

Wow that is a great experience for a jam game. Great job! I would like to see some ducking when you do your voice-over as it's super hard to hear over the music. Good scores from me. Nicely done!

Yeesh! who knew you could make such a good game with such a deep and dark atmosphere in a week! What adds that extra layer of darkness, is that the music fits perfectly, too.

I usually don't play dark games, (Ironic that I made one for the game jam.) but this one is one of the only games that actually pulled me into the game.

If it's not a bother to you, can you try my game out? I want this game to known by many.

Really well-made and polished game! One of the most professional-looking games I've seen made in this jam so far!

When the game started off and I found out that I could press the spacebar to speed up the text, I was impressed. Nice little addition.

Multiple choices and endings, simple and nice graphics, and different things in the environment to interact with. Loved it!

I think for me, the story was just a little too simple, or just a little dry (I assume due to only having a week). But I overlooked that once I got started playing the game.

The thing that really felt not very smooth, was the fact that everything in the game I could control with the keyboard, but to continue dialogue, I had to stop and click the mouse. I hit 'return' a few times until I figured this out. Having to stop gameplay to use another form of interface was a little distracting.

Thank you! I hope you continue this!

Thank you for your feedback! We will definitely add full keyboard controls to the game after the jam, and develop the story/concept. :D

The intro is intriguing. When the narration happens the music is loud and drowns out what the character is saying, and the black bars don't cover the edges properly. Having to use the mouse to select options felt off when you use space bar to initiate conversation. I'm not finding a way outside of the bar so don't really see where to go from here. I'll have to come back and try again before rating since it feels like there's something more here.

Just great, the story is fantastic and I like how the theme is implemented, the graphics are nice and the music is too! Awesome!

This game gives you a nice atmosphere. The graphics are very good looking and completes with the sound. The animations are minimalistic, and in this context and scenario are very appropriate. I look forward for this project. Good job!

I totally loved the atmosphere of the game, you got to expand it after the jam because I want a full version of it!

The soundtrack is awesome, I would have given a 5/5 fo audio if it wasn't for the sound fx that was a bit annoying sometimes like the one on the continue button that has a sharp and unpleasant attack and the dialogue track which is well recorded and acted but mixed too low compared to the music.

The story got me involved and I like how you used the theme of the jam not only for the mechanics but you gave it context in your story using religion and science as an example.

My first ending was neutral and as you said in the end dialogue maybe the theme of the jam spoiled the intentions of the narrator. If you had made a full game like this out of the context of the jam who knows what people would have chosen?

Congrats for this entry, this is refreshing comared to the other games in the jam, I hope you do well at the end of it!

You got a new follower!

Submitted
Tales of the Cursed Word
LikeReply
ItsNotSimonDeveloper1 year ago(+1)

I'm so glad you liked our game! We will make sure we fix the sound issues and expand the game after the jam :D Thank you for playing!

Wow that's deep XD Ended up with moral ending on first try haha :D The art work really sets the tone of this game and the music compliments it well! Really unique idea and good job!

Congratulations to whoever wrote this! You write very well. Music is so good too. Well done!

Minor bug: when you kill the man in the city, you go inside the church and get back, the man is alive again.

Well done!  I liked the music and the moral theme behind it.  I did not kill the dog, and I would never! lol!  I also really liked how the game would go into widescreen mode.  Very nice touch!  Good job!  https://itch.io/jam/cgj/rate/476728

Submitted
The Race: A Track of Lies!
LikeReply
Thomas De MaenSubmitted1 year ago(+1)

Okay, I can't not give it 5 stars all the way! Probably the best game I saw in the jam! Loved the art, loved the music, loved the voice over, loved the experience! I achieved the truth ending btw ;)

Thanks for the kind response!

Wow, what an amazing game - and that for a JAM sub! Maybe I am a bit biased, but loved the voice over narration! Also, full flash back to the past - Lucas Art/Sierra type adventure game, with graphics reminiscent of Superbrother's hit game, Sword and Sorcery EP. And amazing submission!

Thank you for your kind feedback! We appreciate it alot :D

I loved the mood it creates, I ended up wanting to try all the options to reach different endings. Great game! One of my favorites in this jam.