Remember, the game is at times, a liar.
Submitted by LumenArts (@LumenArts09), Olliescottie2002 — 11 hours, 53 minutes before the deadline
Add to collection 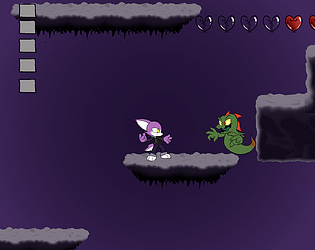 I wasn't able to get far - but you're already working on a fix for the jump bug I encountered. The style and animation of the characters is lovely, especially the main character!

A Great Entry, loved the graphics and the music was calming. Aside from the jump issue was a really welldone job.

Thank you for playing the game! You have no idea how much I appreciate your feedback.

Besides the jump issue, I felt that the controls were odd. I prefer jumping with space and shooting would have been better on the keyboard too. The camera movement - while smooth - did not allow to see all jumps necessary, sometimes you had to take a leap of faith an hope that there are platforms below.

Ok, I see what you mean. to tell you the truth, I could've fixed the camera by using cinemachine, but I used a script instead. I'm gonna add a method using a Mathf.Clamp  method. I might fix that tommorow. but thank you for playing, and thank you for the feedback!

What a beautiful game ! I very liked the graphisms of it !

My only complaints are the lack of sound and the jump issue.

But it's a very nice game overall !

Thank you for playing the game. the jumping issue is going to be fixed after the jam. (which is tomorrow.)

I couldn't play it since it was a .rar file. I'm sure it was fun though!

Just in case, you can actually open a .rar file without an archiver. Ex. WinZip, WinRAR, 7Zip, etc. if you're working on windows, you can right-click on the file, and look for an option, saying "Open with". then choose "Windows explorer". just in case if that helps. if you have a mac or linux, I can't help ya there.

Windows explorer wasn't an option for me, it only said internet explorer or windows media player and neither of those worked.

wait, what? this is interesting. I don't know what to do man, especially since I got WinRAR.

Unfortunately I didn't have time to finish the game, but I have to say that that it's pretty good! The graphics are very cool and the animations are really smooth, also the audio is nice as well,  I just don't see the connection with the theme, beside some fake walls,  since I didn't finish it, can I know it?

Submitted
You Know Nothing
LikeReply
LumenArtsDeveloper1 year ago (2 edits)

Well, no one from what I hear, has gotten to the boss fight. I can see why though. Jumping bug... I just might make a separate build for the boss fight after the jam. (Hint: you don't have to fight him to beat the game. the game tells you that you have to beat him, but the story might give you a few hints.)

Fun game. You should consider upgrading it after the jam

Thank you for playing the game. I will keep your feedback under consideration, but I don't know when I'm gonna come back to this project. right now, I'm gonna work on other things right now.

Great entry! Probably one of the best non pixel art character animations I've seen in this jam! My only real big complaint is the jump. Sometimes it jumps, sometimes it doesn't, sometimes the double jump doesn't work... It's seemingly random.

Though, from what I saw looking through the comments section, you figured out the fix, but it was just a little too late to fix it. No worries, stuff happens. I'm sure you're not alone (it definitely happened to me in the past XD)

Apart from that jump issue (that stopped me from completing the game,) awesome work! Very curious on what other projects you will create!

Thank you for playing the game! I'll be happy to see you again. (As well as watching your YouTube Channel.)

I had troubles with control though. Jumping on arrows is hard.

Don't worry, it will be fixed after the game jam. and maybe, just maybe, since one of the levels is so long, I'll have a separate build specifically for fighting the boss.

The drawing style is really cool and the animations look great! Im not good at platformers, along with the jump bug, I cant proceed much into the game :(  However, your placement of the platforms isn't too hard and does not always require precise jumping, so I like this part of the level. The music suits the atmosphere too! Nice work!

Thank you for playing the game! and don't worry, I'll fix the jumping bug after the jam.

Rated - I really like the purple fox like player character!  Animations are great too~  Take peoples suggestions and improve it after the jam!  Maybe even make a new version not adhering to the theme of this jam (I like the style, but might be better without the jam theme hehe).  Great job!  Please check out my game when you can~ good day!

Submitted
The Quest: Trapped in a Lie
LikeReply
LumenArtsDeveloper1 year ago

Thank you for your feedback, man! but honestly, I'm not sure if I want to continue making this game at this moment. I have no idea when, but I'll keep your suggestion under consideration.

The reason is, I'm working on some other stories of my own, Something I personally love. It kinda looks like, a handful of kids in "The Legend Of Zelda" in my head.

Oh, and I will try your game out in a bit.

The graphics and animations are amazing! The only problem I have with this game are the controls. They feel unresponsive, especially the jump. But other then that, this a really great entry!

Thank you for playing. trust me, I figured out how to fix the jumping bug the minute I uploaded the game. It will be fixed after the jam.

The graphics are very good, and the animations are just amazing! But why the ground in the first level looks like that?

Sometimes when you press the jump button, you don't jump (a little annoying in a platformer).  I think that you should be able to see where you go:  sometimes I can't see platforms below me.

Anyway, it's a good game, I really enjoyed it. There is a good mood. And once again the animations are very successful. Good job everyone !

The first level looks like that because, TheOpenFlare didn't have enough time to edit it. and Thank you for telling us the feedback. We believe the jumping bug will be fixed after the game jam.

You know, we made a boss fight in this game, right?

I understand that you ran out of time^^.

Sorry for the boss but i play for more than 30min and i can't reach the boss. I don't think the game is too hard (even if some checkpoints could be appreciated) but the jumping bug is too frustrating in my opinion. Maybe i will try again when the bug will be fixed :)

When I started the game, the arrow told me to go to the cliff that made the game end, after 4 times I wanted to say that the game is broken like many other games I tried, but just before exiting I thought, maybe I'll go left. and it worked, it's a funny joke but I think there is at least one person who went right and didn't know that there is a game waiting for him in the left. the game has amazing design, great atmosphere, really well done, but I have one small problem that made it very hard to play for me, the jumping sometimes doesn't work at all, and I had to try many times each jump. but from what I played I game you the highest rating I gave to a game so far here, the characters are really fantasic, your drawings are unbelivable! GOOD JOB!

check out my game if you have time :P

Submitted
The stairway to eden
LikeReply
LumenArtsDeveloper1 year ago

thank you for trying the game out! Trust me, I wanted to know how to fix that jumping bug myself.

Fixed the jumping bug! just got to wait until after the jam to upload it.