A puzzle game with time controlling mechanics.
Submitted by MaxShein — 36 minutes, 22 seconds before the deadline
Add to collection 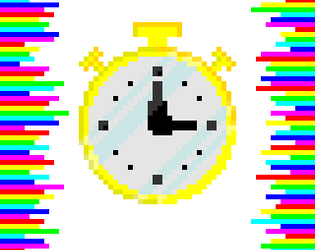 In what way does your game fit the theme?
The game has a mechanic of rewinding time.

Did you write most of the code yourself and made all the assets from scratch?
I made all the code and music myself. Almost everything else is from the Unity Asset Store.

The game is very interesting. Manage to reach level 10. Problem is I suffer from motion sickness with some games, and this one is one of them. Had to pause for 1/2 after level 5... and tried again. Now I had to pause again :(

But the mechanics are really cool! Will try again later. Congratulations!

Very good game! The puzzles and main mechanic are well made, great graphics and audio. On of the best I've played.

It is amazing! It is easily in the top 10 games of this jam. The graphics are great, the only issue i had was that it was running extraordinarily slow on my PC

First, I really like that your game has audio options. It's a detail, but the music not blasting away your ears can make a huge difference.

You also did a great job at the visual effects when you rewind time.

My biggest problem was the controls, though. Not that they are unintuitive, but how they felt. Moving felt somewhat cumbersome, which doesn't fit the puzzles which require precise movement.
The game also felt a bit laggy. This could just have been to the weird movement of the pocket watch, though.
Also sometimes I couldn't interact with buttons, for example, after freezing the player in time.

I only played until there was this lava level with the moving platforms. It was too frustrating because the controls didn't feel that smooth. I wasn't really trying to figure out how to solve the puzzle but rather figuring out how to work with the controls. That falling into the lava kills you made it even more frustrating, especially since it would make more sense if you would rewind in time to avoid dying.

In a good puzzle game, you want to solve puzzles effortlessly. You know these puzzles that seem so difficult until you figure out the trick, and it suddenly becomes a cakewalk?

I couldn't comment much on the puzzle design, but I hope my feedback was helpful nonetheless.

I know about the buttons, and the reason for this is that when you rewinding or stopping time, CharacterController needs to be disabled. Buttons use OnTriggerEnter and OnTriggerExit to test whether they can be pressed. For some reason OnTriggerEnter is not executed when enabling collisions. The controls were done this way on purpose.

I don't know why level 4 is so laggy. I don't like this level either. I had no idea for it, so I did whatever I could think of. I will probably change it a bit in one of the updates.

Wow, this is impressive! I really love the level design, the music and the video effects! Good job!

So cool. Looks so good. I really like the graphics and the concept. I found some unplanned ways to pass levels but it was really cool. Good job :)

This was a challenging but rewarding when you finished a puzzle.

My potato couldn't handle this game :( sorry. But you got 5 star from the graphics :D

Great puzzle game. I had fun playing with time. It was nice to have mouse sensitivity setting)

What an interesting game! The puzzles were challenging, I liked the 3D models for most of things. I didn't realize you could run at first, but that made some puzzles way easier.

One thing that I didn't quite like was that when rewinding your view also rewinds, which makes sense, but in level 4 I believe, the one where there's a lava pit and moving platforms, it felt quite uncomfortable, since I had to rewind to reach the moving platform but I didn't know where it was at the moment. Maybe being able to control the view when rewinding could be good, but I'm not sure.

Despite that, it was a great game!

Very nice and working 3d game. I like puzzles. Also i dont know did i found some new ways to clear levels becouse i feel like it:D

Yeah, I know about those different ways. My friend played it a few hours ago and found some interesting bugs. Believe me or not, but you can beat levels 1 and 6 without using the stopwatch! It all will be patched.

Cool loocking game! The time mechanic it's really well done! and the puzzle quite good, some a little bit complicated, but good anyway

Really cool game. i like that the puzzles are not that easy. Keep up the good work. :)

I like the mechanic when the player can rewind and stop time, but I think the puzzle is difficult at some level. I get stuck and trapped in the room, and have no idea to solve it.

I like the detail that went into the small things, for example, the lever's colour changes when stopping time or there's a filter for colours when stopping / rewinding. The puzzles were well thought out, and the last puzzle took me a while before I got to the yellow button!  With some post processing minimalistic look and colours could look even nicer. Nicely executed puzzle game!