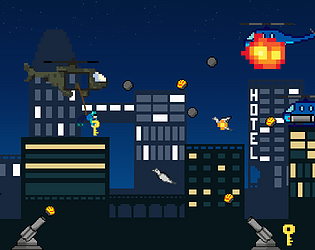 In what way does your game fit the theme?
It doesn't really. I could not get the rewinding of the Bungee Cord to work properly, but I think I makes for more interesting game play to have to bungee back up to the helicopter.

Did you write most of the code yourself and made all the assets from scratch?
Yes my team and I did.

The bouncing is a great mechanic, and the game is really nice. The difficulty is to high, in my opinion (try adding a difficulty selector, maybe). I liked the graphics and the audio a lot.

limiting the helicopter movement is really anoying in my opinion. I get frustrated trying to dodge downwards or forward and beign stopped by an invisible wall.

The bouncing mechanic was pretty fun to do once I got the hang of how it worked. I was a little confused why I was unable to fly forward all the way. The shooting was effective and I liked the overall concept. Good job!

The bouncing was a fun mechanic (more interesting than I think rewinding would've been), and deciding when it was safe to drop was engaging. Like others have said, I wish there were health powerups. Without them, it feels impossible to survive.

Nice! Even if the cord doesn't rewind as you maybe wished, it still fun to catch the guy bouncing. One small suggestion. Heatlh powerups would reeealy come handy. And make the player last longer.
But you made a really fun game here! I replay several times. Congratulations! 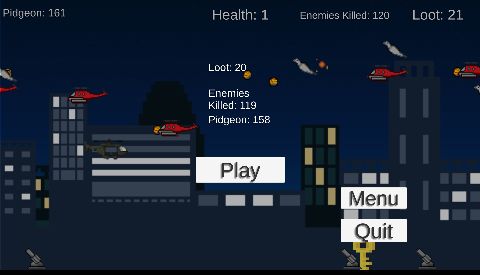 Always fun to kill pigeons too! Specially when they have the size of a chopper 😁

This game was fun! I really liked getting the guy back in the helicopter by bouncing him around. You should have gone all in and made him shoot instead of your helicopter ^^ (not sure how it would've worked out). Here is my (serious) feedback:

Overall, I really enjoyed this game and I think, with a touch of polish you can make it very nice!

NB: I'm still missing a bunch of reviews so if you have time to rate my game, I'd really appreciate!

I like the bouncing mechanic.  It is really fun to attempt to bounce the guy back into the helicopter.  I think more can be done with this unique idea.  I just wish the side scrolling shooter was a bit easier as I kept dying before I could really accomplish anything.

Submitted
You will never catch me!
LikeReply
SoyVixterDevSubmitted1 year ago(+1)

Nice game, cool mechanics and fun but at the same time a bit confusing gameplay.  It's sad you couldn't implement the rewind but good luck for future jams and games!

Submitted
Back in Lab
LikeReply
JMSSubmitted1 year ago(+1)

It's a good game. It only kind of fits the theme (the main feature of the game is that you CAN'T rewind haha), but that's OK, it's a change of pace from all the time rewinding games (mine included!).

At the middle of the level or something, an end of game screen would appear, as if I had lost. But I still had 80+ health left? It was kind of weird and I don't think it was intended.

You should add a "High Score" feature! Where it saves your best score ever. That way you incentivize replaying your game, and maybe even sharing with your friends!

Actually, I never understood: were you supposed to hit the pidgeons? Or hit as few as possible? I kind of felt bad shooting them, but it seemed that I was supposed to...

Was it your first game jam?

Submitted
Attack of the RNG!
LikeReply
GusDeveloper1 year ago

Hi JMS. So to answer your questions.

We also wanted to make levels that would slowly progress the spawn rates of enemies. Each level would require you to collect an amount of loot before going to the next level. Adding high score is one of those things we just didn't get to. There is more we wanted to add and fix. Our team did get to our minimum viable product state and I am glad we were able to accomplish that.

Yes it was the teams first jam! I am proud of what we were able to produce.  I think we could have gotten most of the our goals done if we had another day or two. I believe I will be making the changes to the game after the jam is complete, but I am not sure on when I will get to it. The team is working on our 2nd jam currently, so changes will have to wait for that jam to end.

Thank you for playing Bungee Caper and for the feedback you have given as well.

So it was going to be a completely different game! Haha, no judgement, I don't think I've ever had a jam game end up with more than 20% of the features I initially planned :).

That sounds really interesting and I'll be sure to play it if you release a post-jam version.

Good luck in the second jam!

Like many games this starts way to hard. And the music hurt my ears a bit.
Other than that you did a great job.

Submitted
Wind me up
LikeReply
OggalSubmitted1 year ago

This feels like a real hidden gem on the classic game sites I would frequent as a kid.

Honestly, I could probably play this game for hours, especially if had a bit more polish!

Wow! That was fun and fast paced like my game! The art work was really nice! Good job to the team!

it is so lively and dangerous, giving a good amount of difficulty to rewind time. like the art style, like a 16 bit or classic style.

Please Check out my game :)

Submitted
Back In Time
LikeReply
WobfogSubmitted1 year ago(+1)

Exiting shooter which was fun to play. The amount of enemies on screen can be overwhelming at first so it would be nice if the amount increased over time but overall, good job.

Reminds me of something I'd find on The Daily Click circa 2010. Not a bad thing though, it's certainly a style that works for this kind of thing. Plays well!

Thanks for the playing and commenting!

Fast Paced Great Fun, and quite challenging thanks for checking out my entry aswell