Submitted by Blue Cactus Games — 49 minutes, 1 second before the deadline
Add to collection 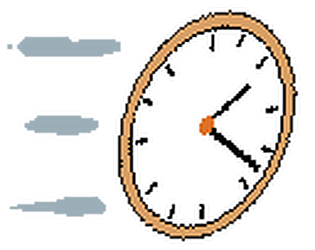 In what way does your game fit the theme?
The player has to go back in time to undo crimes that happened in the present (settings is 2067)

Did you write most of the code yourself and made all the assets from scratch?
I wrote all the code and "art", music is a set of royalty free musics from http://onemansymphony.bandcamp.com

It is interesting to see that the scenarios change each time you play. Perhaps you could allow a seed input so players can share their criminal cases?

It’s pretty cool to have a large and open town that can be explored with different alignments of objects with each new case. However, since the placements of the NPCs and trash bins are random, I ended up getting stuck in the starting area with no way to enter the alley since there were trash bins in the way: 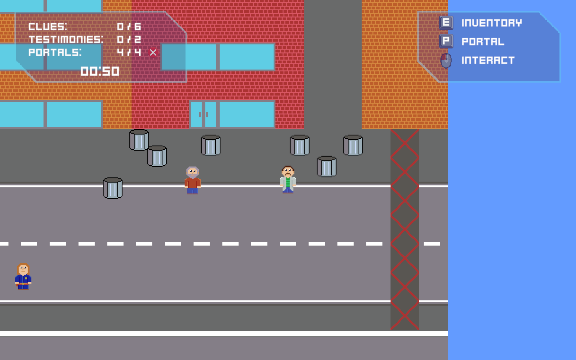 The game mostly involves clicking random objects and NPCs until you find the evidence you need. I was hoping the game would involve hints that would connect with another. For example an NPC who finds out you’re on this case coming up to you and saying “Look, I dunno much ‘bout this case, but I think I might have overheard some guy at the Ale House talkin’ about some creep coming out of their apartment soaked in blood or somethin’. But just so ya know, ‘lot of people there get pretty tipsy on a Saturday like this, so take what I said with a bit of salt”. And then you would go to the Ale House to get more info. You ask the bartender if he overheard anyone talking about someone soaked in blood. He mentions Jeremy was drunkenly talking loudly about it. Jeremy refuses to talk while he’s sober, so you find a way to have a few drinks with Jeremy, and get him to speak up when his alcohol levels go through the roof.

Finding information should be interesting for the player. It should involve people who you would least expect to have useful info (like a hobo in an alleyway who was near the apartment of the killing), the people who won’t give up information without exploiting a weakness of theirs, managing to spark a person’s memory by showing them a piece of evidence you found, etc.

Going up to the most random people and trash bins to find evidence based on luck is not fun.

I kind of got excited when the game involved time travel, but the NPCs did not look different at all, and the game ended immediately after clicking some trash can. The game never announced who did the crime, so  I felt completely unsatisfied to not get a concrete answer of who did the crime.

Its a pretty interesting concept. I like it a lot. I loved the idea of randomly generated levels, it was nice. I would have loved if there were more difference in the characters (you have civilian, police officer and player). For instance, in one of my cases the evidence pointed at someone from the church, but the criminal was just a civilian. It would have been great if he had a different sprite to make it seem like someone from the church.

Very interesting concept travelling to different ages to change the present crime. The art was also good considering is your first game jam and the 1 week time limitation. Great job, keep it up.

I really like the idea of swapping between different time periods! Reminds me very much of back to the future where the structure of everything is the same but the setting and themes change dramatically. With a bit of refinement this could really be a very interesting game puzzle/action game! I hope you continue working on this after the rating period is over!

Based on the other comments you got a pretty good idea of what needs fixing and more development. Good luck making the changes after the jam!

Cool game, but the story could be clearer.

Sure, I've watched some people play and noticed that some of the clue could be a little bit cryptic. I'll rework the dialogs when I update the game. Thank you for rating my game!

Nice idea/concept (really like to use time jumps for another historical periods) but requires more exploration. The movement and some objects are a little buggy, but (for what it seems) nice for a first experience.

I'll definitely want to expand the game! A lot of the original idea has been cut off because of the lack of time. Thank you for your honest feedback!

Good game! maybe you should put something in the outsites of the city but the game was so intresting and so good, great job!

Thank you for your feedback! I'll definitely try to improve the level design by making it a bit more varied!

Amazing game! Lots of scenery and you can change the scenario at the beginning of the game! I had a lot of fun playing it, bravo! There could have been a bit more sounds with the actions you do (like the portal, the mouse hovering over the objects, the sound of the timer...) and please add a WEBGL version because this game is extremely cool! More people need to play it!

I didn't think about a WebGL version, that's a good idea! I wanted to add a MacOS version but did not have anyway to properly test it. Yes, SFX didn't make the cut unfortunately but that's on my list! Thank you for your great feedback!

The graphics were amazing and the SFX were pretty cool as well! The controls took me a while to understand but i feel lile that is alright. Overall a great game

Thank you for rating my game! Others also pointed out that the controls were not quite clear. I'll probably add an introductory level to get the player familiar with the controls!

Great game. I liked the graphics as well as the sound design as well as the random level generation. A tutorial would have propably helped a ton though since it took me quite a while to figure out how it workes.

however after figuring it out i really enjoyed it and hope you will be able to enjoy my game as well ;-)

Thank you for rating my game! A small introduction level would indeed be nice! I'll add it to my to-do list!

The game has an interesting concept, but I found it lacking in story and dialogue. I expected to see more of a change in scenery and sprites when time traveling, like maybe a French flag or something that immerses you more into the historic setting, but it's mostly the same except for color.

The controls are smooth, and the story has potential, keep it up!

Thank you for playing the game and providing your feedback! This was my first jam and I was pretty bad at managing the time. Unfortunately, level design suffered a lot from it (it litteraly was the last thing I worked on before submitting...). There's a lot of stuff I need to work on to make it a better game but thank you for pointing me in the right direction!

Very interesting! It's really impressive the amount of content you got implemented in the jam time. Nice job!

Thank you for rating my game! I'm working to add more to it in the future!

Fun and not too challenging puzzler. Has tons of potential. Liked it a lot.

could you also play and rate my game?

Thank you for taking the time to play and rate my game! I'm gonna work on updating the game and include all the little things that I had to cut along the way!

This was a really interesting game!

Thank you for rating the game!

I solved it! :) Really like the time travel concept - I can just image how huge potential it might be there. It will be greater fun if the puzzles are more challenging. 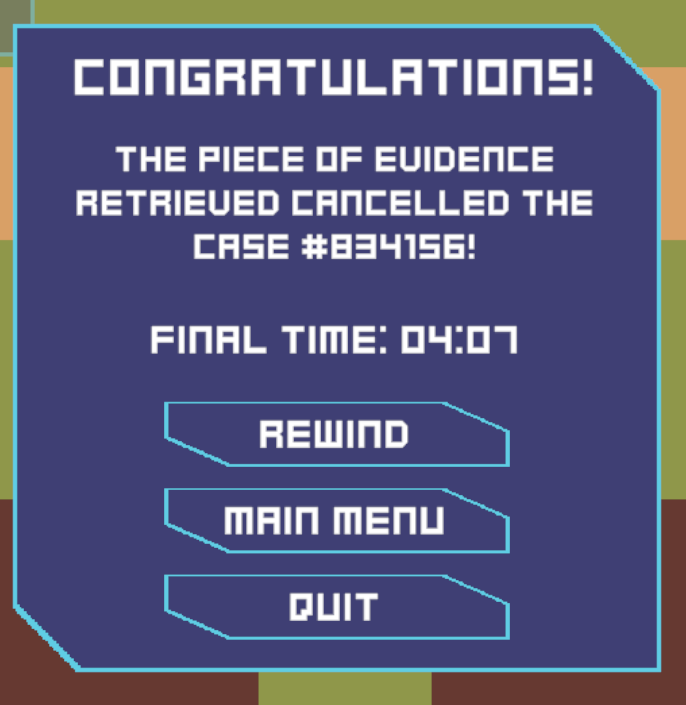 Ouh, nice! I'm glad you succedeed! When I saw my wife test the game (after the submission), I was really worried that nobody would be able to solve the game. I'll work on updating this game after the jam!

Really interesting. Honestly, it would never have occurred to me to make a game about solving cases from the past! Good concept!
Make sure to check our game too!

Thank you for reviewing my game! There was more to the story but I had to cut it off to make the deadline. I'll update the game after the jam

Very nice concept! The time travel doesn't add much mechanic-wise, but the different settings are a nice touch.

Thank you for reviewing the game! I scoped the game a bit too broadly and had to cut a lot from it. I'll work on an update to make it more coherent!

I wasn't able to solve the crime, but I love the game concept!

Submitted
In The Mind
LikeReply
Blue Cactus GamesDeveloper1 year ago(+1)

Thank you! This is the first game I've ever finished, I made a ton of rookie mistakes during this jam (did not playtest enough...). With extra polish and a few changes, I think it can be fun to play!