People Made From PeopleView game page

SCI-FI FMV Game made for the Blackthornprod GAME JAM #3
Submitted by Lets go to the grindhouse (@nickFMVdev) — 1 day, 22 hours before the deadline
Add to collection 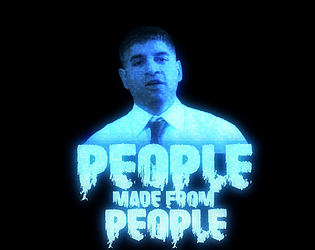 People Made From People's itch.io page

I really like the direction you took with this, it's definitely (as everyone is saying) one of the most unique approaches here.

I'd love to dive back into it and explore all the alternative endings but after running through twice I'm kind of put of by having to sit through the intro again; so you could perhaps introduce an optional skip which players can use after completing the first playthrough.

The most apparent thing for me woul be perhaps reducing the screen size for some of the non-CRT-type shots, as their lack of resolution really showed through on the big screen

Most players have mentioned something about interactivity... and I definitely agree. I think the easiest way to remedy this would be to introduce some more interactivity at the very beginning so that the introduction video feels less like an intro cutscene and more like a key part of the game itself. First time around I was sitting their waiting for my moment to go (as I do with most introductory cutscenes) which inherently changes how I view it.

Also, regarding the intro, I'm unsure whether the man (with purple backgroun and beard) was meant to signify the player or just another subject. But I personally read it as the player. This made it a bit problematic as it changed what my decisions meant; was I choosing for myself of for this character? This would also become slightly more problematic the more you diverge from being a white man with a beard (haha) as identification would become skewed. In this way I'd personally place the player as the recipent of the video, not a character on screen. But as this woul inherently change the postioning of the player it definitely shouldn't be done on a whim.

Finally, I was really intrigued by the ideas of alternative endings but throughout the playthrough I felt my choices felt kind of arbitrary; for example the "choose a testimony" felt like it would be irrelevant the order they were activated. Perhaps making it clearer when and where decisions mattered could help bring players back--and I say that because the key reason I went back for a second run was knowing that there were alternate endings. That said I suppose the rank at the end does give this to you in some way.

Either way, just some thoughts there. Really like the innovation and complexities you put into this and am super excited to see how your future projects will turn out!

Submitted
Sacrifices
LikeReply
Lets go to the grindhouseDeveloper1 year ago(+1)

Thanks for your comments.

I am not sure if you know my back story but i was a film maker for 15 years and make these games using old footage from finished and unfinished projects so a lot of the time it's carving a story from what i have so thank you for praising it's uniqueness.

The skipping of the first scene is something i tend to leave off as when watching alot of my games streamed my pet hate is people accidently clicking and missing the intro premise to the game and as my games are all so weird it helps haha. However i do appreciate it being a chore when you go back through. It is definitely something i will add to the next version

As for the filters again this is something i am aware of and again will change. but I was limited with time so just threw filters onto the clips and didn't play around too much with settings.

I have big ideas of what can be added to give it more interactivity and a few simple ones that i could have added and missed and kick myself for now.

It was built from footage from a 48hour film contest from back in 2012 that was pretty ambitious so originally there was a bit more for Pete the guy on the couch but in this he is more for the infomercial and he goes into the elevator.

The biggest mistake i made with this game was not making the routes clear enough if you find glitched clips you follow them to get the endings however i did not highlight them enough.

Thanks again for playing. I put games out monthly all FMV stuff and this one was a bit different to my usual and i have a some footage that is similar so i am looking to adapt this into a much bigger much more interactive game.

What a unique and interesting entry! Definitely on the weirder side and definitely awesome. I really liked the presentation and the narrative. This is a really cool game! Great job!

Really well made, I think I maybe would've liked a little less holographic filters, since I just thought the scenes without them looked better. I also wish there could've been more gameplay, but I understand that it's not that sort of game. Overall, it's incredibly well made for just a week long project! Well done!

Thank you. A lot of the feedback has given me great ideas on how to adapt it into a much bigger project

About the visuals I have to complain only for the rate of flashing. I think I got little bit dizzy but maybe that's me.

Another is the use of green screen and crt effect in the testimonies. The problem is that it was visible not the crt but the cut. Probably the limited time affected this cause the presenter is top quality.

As a game it had many flaws, as not much interaction and no ability to pass the intro. You know... to do many play throughts. Also why I am getting always D?

Edit: I missed the meaning at the beginning but this is in theme.

Yep... I tried to find flaws, cause this is very good, and I realy liked.

thanks for your comments.

Sorry if it made you dizzy I was trying to mix up the styles with the testimonials and presenter so that's why they differ.

It was a big project to tackle in a matter of days on my own so the gameplay is basic and it's not explained enough how to activate and find the glitches that lead to the other endings I have mentioned this in other comments and it's something I will fix when I make the more complete version for a release.

I put FMV games out monthly and I have watched so many playthroughs of my games and on the odd occasion when I have made the first clip of the game skippable people have skipped and missed the whole premise of the game so it's a pet hate of mine so I always make the first scene in skippable haha.

But that's something else that I can change after a playthrough.

Thanks for your honesty and sorry again for making you dizzy

Well, That was a completely different experience. So I am quite surprised and fascinated by this game. I got the D end. This should have taken a lot of hard work. Everything just felt ominous and wrong. The amazing atmosphere you created here was really worth playing. Thanks for the game.

Please take some time to play and rate my game as well, I would really appreciate it! Thanks!!

thanks for your review. I put out FMV games monthly but this was really different to anything I have done so far I am so happy with the response I have had from it thanks I'll check your game now

Submitted
Eromsissel
LikeReply
Lets go to the grindhouseDeveloper1 year ago

Thanks for the Kind words. I really enjoyed throwing this one together

It's great to see a narrative themed game in a game jam, and this is by far the best narrative game in the jam. From the beginning, you are immediately immersed in the story,  and a poignant and serene atmosphere is created. The actual story is left vague enough for the player to have their own interpretation, and the subtle use of comedy throughout added a lot of charm! The only thing I would suggest would be to have more interactivity that happens more frequently, but other than that this was an amazing experience. Can't wait to see more from you, and I'll be going through the process too!

thanks for your kind words and super stoked you think it's the best narrative game. I put out at least one game a month on here and sometimes Steam all FMV games. Mostly horror and weird stuff this one was really different to my regular content. But I have been so happy with the response I have ha from it I have already worked out how I can expand it and make it a bigger more interactive experience for a proper release. Thanks again I will play your game now

Love the game! Great work! Keep it up!

Submitted
Adonis
LikeReply
Lets go to the grindhouseDeveloper1 year ago(+1)

Cheers i put games out monthly all weird FMV stuff

Just gonna rate it. You deserve it :)

Submitted
Blob
LikeReply
Lets go to the grindhouseDeveloper1 year ago(+1)

Weird, but interesting game as many others have already said! Great take on the theme! My only complaint is that the UI and the mouse indicator need some improvement, but otherwise great job! Excited to see what you make next!

Thanks, Yes things llike the UI and Mouse can be tweaked if i take it further. I Put games out monthly on Steam and sometimes even more frequently on here all FMV based check my other titles out if you enjoyed this

Weird Idea, and like C4Scar said, it defiantly felt like a Black Mirror episode! Also interesting take on the them, good Job!

Thanks that's definitely the vibe i was going for

Thanks did you uncover any of the hidden Endings?

Ok, I said I was gonna play it, but turns out I am a liar. I played a little but this realistic artwork, and the story, and the "horror" part are too much for me, I'm sorry! I was about to run from my PC! Anyway I rated it and I really like the art.. almost as much as it scares me..

Submitted
< is >
LikeReply
Lets go to the grindhouseDeveloper1 year ago(+1)

If you really assure me that's true, I can continue.. but I'm not going to forgive you if otherwise XD

LikeReply
Lets go to the grindhouseDeveloper1 year ago

Really atmospheric game, the effects were really good and you don't often see video footage in game jams. Especially liked the hologram effect. An issue for me was that the testimonials only played out of my left headphone. Overall cool concept tho

thanks glad you liked it. I'll.look into fixing audio

I can't believe somebody made an FMV game! Love the atmosphere, and the writing and acting really sold the dystopian world building. I do wish it was a bit more obvious what you're actually supposed to do, though.