A game where you are a monk who kills and scares away his worshippers...
Submitted by MikeSundaysProgrammer — 3 hours, 8 minutes before the deadline
Add to collection 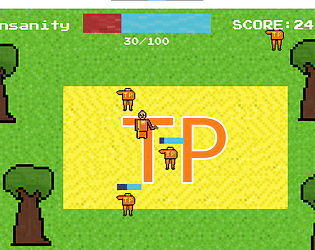 It's a really unique idea! I liked it, but sometimes my shots didn't line up with my mouse and that was kind of annoying. But otherwise, really cool!

Glad you enjoyed it! Mouse aiming is definitely one of the areas I could have done better!

LikeReply
Lets go to the grindhouseSubmitted171 days ago

Submitted
People Made From People
LikeReply
MikeSundaysProgrammerDeveloper171 days ago

Thanks for playing and rating it!

I liked the way you interpreted the theme, and the concept you came up with thereafter. There were however multiple things that I disliked. To begin with, the music was a bit annoying. Next, the controls, specifically shooting, felt very unresponsive and didn't fire every time I pressed a button. Neither did the shots go where I aimed with the mouse, but rather a few degrees above.

The tutorial in the beginning was good, but the time between each text was far too long. I felt it should have been 0 seconds.

For the visuals, it looked good. The worshippers themselves looked quite squished though.

Thanks for providing such elaborate constructive criticism! I will try to keep all that in mind for the next game jam!

Glad you liked my jam entry!

Good little game, I like that you're able to switch between weapons, and the backstory was pretty funny. Good job!

Thanks for playing and rating it!

It was a great game. The idea to use 2 different weapons was good. I think the aim was a little off. Other than that I really liked your game. Thanks for the game.

Please take some time to play and rate mine as well. Thanks!!

Glad you liked it! I will try to play your game as soon as possible!

Cool little game! Really enjoyed the game's mechanics and SFX. It definitely gets difficult fast, haha! I think others already mentioned the controls, but that can be tweaked pretty easily. Overall, that was a fun challenge!

Glad you enjoyed the mechanics and the sfx! For the next game jam i will try to improve on the controls part!

Very cool game! I think the concept is really fun, the aim's a bit off like most have mentioned but still enjoyable. Great job!

This game is very enjoyable. It had problems with the control and it can look better visually, but I think that the concept is very good and is surprisingly challenging and entertaining.  Good job mate!

The weapon was slightly annoying to aim, other than that it was fun!

Glad you enjoyed the game despite the not perfectly executed aiming mechanic. It's something i will keeo in kind for the next jam:- )

Cool game, i like the idea of a monk going insane haha :P one thing i can give as feedback is that the shooting aim was way below where my mouse was wich made shooting a bit confusing but overall quite a nice game, good job :)

Thanks for playing and rating my game! From this and the other comments mouse aiming is something i will try improving next time:- )

Fun idea! It's interesting to need to protect the temple! I like the two different weapons and how you need to use them to prevent yourself from being overrun!

Glad you enjoyed the game experience and mechanics!

Thanks! It was a great! I hope you will try my game too!

Submitted
Maze of the Neglected Triangle
LikeReply
MikeSundaysProgrammerDeveloper176 days ago

Glad you enjoyed the game:- )

it may be a problem on my side only

I think this is more a general itch.io bug since it has happened with me several times

Interesting concept, i liked killing people as a monk for some reason xD, There's some room for improvement when it comes to visuals.

Glad you liked killing your worshippers lol! I absolutely agree that my visuals aren't the best, but this was my first week ever touching art software xD

fun game had a enjoyable time whilst playing i hope you do well in the jam!!!

Glad you liked it and thanks! I also hope you do well in the jam:- )

Interesting, the aiming is kinda weird though

First thx for playing and rating my game! Why do you think that the aiming feeps weard? Just so i dont make the same mistake again

You can't aim in all 360 degrees. You can't shoot directly up or down.

Ok. Thanks for the feedback!

The gameplay is fun but the mouse aim is a little bit weird.

First thanks for playing my game! Second yeah it seems that the mouse aim from this and the othrr comments was something i messed up with

Cool way to do the theme! Well done