Dungeon Arcade Shooter, be careful not to use too much ammo.
Submitted by I_Am_Penguin, kumroDev — 4 hours, 34 minutes before the deadline
Add to collection 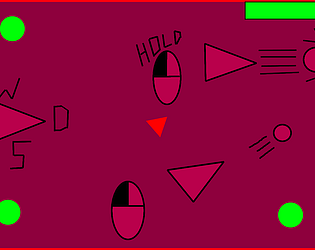 Thank you, glad you enjoyed playing!

I thought the premise was neat and the way you shoot your own hp is very fitting. My main critique was that the following enemies kinda end up clumping so you just end up looping them in a circle unti theyre all on top of each other, they need a little bit more complex movement in my opinion. Also the music and sounds did get a little grating after a while, maybe the sound effects were a bit too loud?

We'll definitely have to look into the volume, as for the music, it was kind of thrown together just so we could finish the game.

So that is most likely getting an update.

We didn't have enough time to make complex moving enemies so that's something we will have to look into, thanks for the suggestion!

cool use of the theme

The gameplay loop is pretty fun, and the way the enemies and such are set up leave it open to a few different playstyles.  Personally i enjoyed trying to make the enemies kill each other.  Though it felt a little imprecise as to how much health was lost per charge shot level.  As for some finer feedback tho:

Overall a nice simple concept with a fun core game loop and a bit of variety thrown in.  Though there was one game breaking bug that I seemed to keep running into where I would "teleport" outside of the room, generally it seemed to be teleporting me to the same location, which was above the starting room, and to the left of the first room with "turrets".  I'm not sure what was going on, but it definitely got a bit annoying.

Yeah, that was a common complaint we saw, the charge shot is the first thing we're gonna fix in the next update, thanks for the suggestion.

Hmm, I haven't seen that bug yet. I'll definitely look into it so thanks for bringing that up.

i really liked this game, it's very addictive and fast paced! the theme is well merged into the game, and the controls are great, the need to think before shooting makes the game a fun challenge, i can't imagine how awesome this game would be with more time put on it, you have a great initial project to start

Thanks for playing, I'm glad you enjoyed it!

Nice game! I always seem to find myself getting addicted to these dungeon-type shooter games. The controls felt great. It's a simple but fun game!

I really enjoyed this game, up there with the best of the jam! I really liked the dynamic percussive music for when enemies are around, and the recoil from each shot gave a lot of power to shooting. The concept of life being ammo fits really well, and I like how it carries into the next level.  The boss had a bit too much hp in my opinion, but the second phase was really action-packed! The game could do with a bit more content as well. Overall really great work!

Thank you for playing, I'm glad you enjoyed it! :)

This game should be win in "Theme" category. Very simple and cool concept.

Thank you, I appreciate it. Thanks for playing as well, glad you liked it! :)

Thanks for the reply but i really think that this game deserves to win the theme category more than ours : https://donutask.itch.io/lessismore

A very great concept, there were a few bugs though but its understandable since its a jam game, would like to see this concept expanded further

Thanks for playing, glad you liked it! :)

Yeah, I also found some bugs after publishing, we will have to fix those in future updates.

Great Game! I also did a video review of it!

Submitted
Into the Blizzard
LikeReply
I_Am_PenguinDeveloper1 year ago(+1)

Wow, I'm honored that our game made it into a video. Thanks for playing! :)

I didn't realize that bug was there, we will have to fix that in a future update.

Game is good but I confuse which side to shoot

What do you mean by "which side," like which side the enemy is?

no i confuse with which  side the triangle shoot balls

However, I'm not exactly seeing where the "less is more" is in this game. You don't gain anything from having less health or less of anything. Additionally, charging up the attack didn't seem very worthwhile. It was mostly just a slower way of attack. It costed the same amount of health and took a similar amount of time to charge it. If it were noticeably more damage efficient, health efficient, and/or time efficient, I would make more use of it.

Otherwise, the gameplay is really solid and the game is well polished. The visuals were pretty bare bones but the game was very clear and communicated itself really well.

The boss fight was pretty cool. You're able to progress it as quickly as you want.

I really enjoyed this. Great job!

Submitted
Get It Out!
LikeReply
I_Am_PenguinDeveloper1 year ago

Thank you for playing, glad you enjoyed it! :)

For the theme of less is more, we thought of the idea as using fewer shots are better than spamming shots because you have to think about your health bar as well as the enemies shooting at you. In that way, less is more when it comes to shooting.

I liked the particle effect when the bullet hit the enemies. I think the charging could have been faster. Or maybe it could have resulted in a shot that went through multiple enemies.

Thank you for playing, glad you liked it!

Thanks also for the suggestion, we will take it into consideration for future updates.

I really like the gameplay. It was fun to play.

Nice game! The art style and mechanics are great!

Thank you for playing, I'm glad you liked it! :)

Great game, a bit more art assets and maybe some power-ups, and you could have yourself a really great store ready game. Great work! Keep it up!

Thank you for playing, glad you liked it!

Yeah, this was our first game and could use some improvements, the learning experience was also good. :)

Great game! Could use a bit of polish like damage indicators and screen shake, but it's very fun regardless! I'd appreciate it if you'd rate my game as well!

We'll probably add those features in future updates so thanks for your suggestion :)